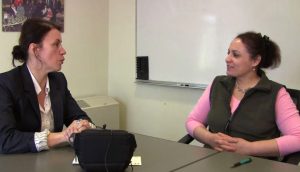 This post by Stephanie Hall of the American Folklife Center was first published on the center’s blog, “Folklife Today.”

An important new oral history collection documenting the lives and careers of home health-care workers in Oregon is now available on the Library of Congress’ website. The American Folklife Center recently announced the release of “Taking Care: Documenting the Occupational Culture of Home Health-Care Workers.” This fieldwork is part of the center’s Occupational Folklife Project and the seventh such collection to be put online.

In 2014, Professor Bob Bussel and his colleagues at the University of Oregon Labor Education and Research Center in Eugene, Oregon, received an Archie Green Fellowship from the American Folklife Center to conduct oral history interviews with workers who provide home-based care for the elderly and the disabled throughout the state of Oregon. Bussel and his team worked closely with the Service Employees International Union (SEIU), Local 503, to record 35 in-depth interviews with home health-care workers, an occupation that was not previously represented in the American Folklife Center archive.

The collection’s interviews with the health-care workers took place primarily in the workers’ homes and at the offices of SEIU Local 503 in Eugene, Portland and Salem, Oregon, as well at as the office of the American Federation of State County and Municipal Employees in Grants Pass, Oregon.

Interviews were conducted primarily in English, although a few were conducted in Russian. Interviewees ranged from long-time home health-care workers to individuals who had more recently joined the profession. Many interviews also touched on the role of their union, SEIU, in training individual workers, establishing professional standards and enforcing equitable pay and benefits.

“Taking Care” is part of the multiyear Occupational Folklife Project of the American Folklife Center to document workers in contemporary America. Over the past eight years, supported by the American Folklife Center’s competitive Archie Green Fellowships program, more than 40 researchers and research teams throughout the United States have received funding to document oral histories with workers in a wide variety of trades. Interviewees include ironworkers, hairdressers, electricians, domestic workers, longshoremen, funeral home employees, trash collectors, gold miners, racetrack workers, tobacco farmers and many more working Americans from all sectors of contemporary society. Through the project, oral histories of hundreds of American workers — stories about their skills and work routines, legendary jobs (good and bad), respected mentors, flamboyant co-workers and more — are now part of America’s national record. These oral histories not only enrich our current understanding of our fellow Americans, but will also inform scholars and researchers for generations to come about the lives of contemporary workers at the beginning of the 21st century.

As American Folklife Center director Betsy Peterson noted, “With the launch of AFC’s innovative Occupational Folklife Project, researchers and members of the public will have direct access to hundreds of hours of compelling fieldwork. They will be able to hear the interviews and view fieldwork images and documentation that previously could be accessed only by visiting the Library in Washington.”