This is a guest post by Stephen Winick of the American Folklife Center. An earlier version was published on “Folklife Today,” the center’s blog.

With Halloween just around the corner, the Library of Congress has released a new web guide to Halloween resources at the Library. It features select materials on the folk customs, fine art, pop culture and literature of Halloween and Día de Muertos, or “Day of the Dead,” observed in Mexico and elsewhere in North America on November 1.

Library collections range from classic films like “The Bride of Frankenstein,” “Nosferatu” and “Carnival of Souls” to recordings of storytellers spinning yarns about ghosts and witches. There is documentation of spooky séances with the great Harry Houdini, iconic artwork of Edward Gorey, essays by well-known scholars such as Jack Santino, photographic documentation of Halloween traditions . . . and, of course, thousands of wonderful books. The new web page will act as your guide through the Library’s spookier side!

If you plan to be in Washington, D.C., between October 27 and November 1, consider also checking out our pop-up exhibition of some of the best of these scary treasures. The event is called LOC Halloween: Chambers of Mystery, and it’s sure to add both cheer and chills to your All Hallows season.

For now, let me share with you “Married to the Devil,” an outstanding tale of the supernatural from the collections of the American Folklife Center. You can listen to it in the audio player and read along with my own transcription, below that.

The story comes from Bessie Jones (1902–84), a singer and teller whose extensive repertoire was recorded by Alan Lomax. His organization, the Association for Cultural Equity, has a nice biography of Jones online if you want to know more. For the present, let’s just say that she was an extraordinary talent, a leader of her Georgia coastal community and a cultural ambassador for her traditions. In 1982, she became part of the first annual group of National Heritage Fellows from the National Endowment for the Arts, a particularly distinguished group. Of course, Lomax’s extensive documentation of Jones is part of our archive here at the American Folklife Center. 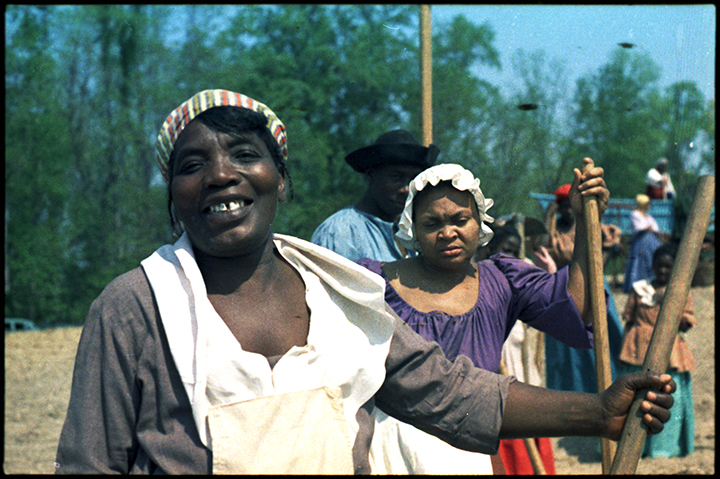 Transcribing stories from people whose dialect is different from your own can be a challenge. Even Lomax, who knew her quite well, had to ask for clarification at one point! In most cases, I’m pretty sure I captured what she’s saying, though a few phrases could go either way: is she saying “yard dog” or “guard dog?” These moments of uncertainty even affected the title of the story. While the folks at the Association for Cultural Equity called it “Story of a Girl Who Got Engaged to the Devil,” I’m reasonably sure they go through with the wedding, so I decided to call it “Married to the Devil” instead.

“Married to the Devil” is a version of one of the most widespread magical tales in African-American tradition. In most American versions, the person who needs to escape the Devil is a man, and the helper is the Devil’s daughter. In this unusual version, the person escaping is the Devil’s newly married wife, and the helper is—well, let’s just say “it’s complicated!” A nice aspect of the story is that Bessie Jones gives Alan Lomax a little lesson in interpretation at the end. It’s one that I suspect a lot of African-Americans of her era would agree with. The fact that the story carries wisdom with both religious and practical applications may help explain why it was so popular with that community.

My transcription style is one that tries to keep some of the texture of oral performance. Rather than just organizing into paragraphs, I’ve made the unit of transcription the spoken line, bounded by pauses or other segment markers. In this, I follow some of my teachers in folklore, anthropology and linguistics, though I’m sure any deficiencies are purely my own fault.

Representing reported speech, which Jones only sometimes indicated with phrases like “say” or “she said,” was a challenge. I settled on using quotation marks throughout. But when the rooster sings, I used the block-quote function to set the singing off more fully from the plain text: a breakthrough into performance within the performance!

In the end, my goal was to represent how Bessie Jones told the tale, mainly for the benefit of listeners who might not catch the words of her dialect without some effort. So please listen to Bessie Jones tell the story, and scroll through my transcription as a form of subtitles.

This girl, she was…a girl, they say
She THOUGHT that she was so pretty.
Everybody always told her she was pretty.
And she just had all…she just was IT, you know.
And her parents was rich and everything, and had plenty.
And she was their only one, and she had plenty.

So the Devil, he knows, you know.
The Devil made himself pretty, which he ARE pretty.
He made himself most beautified and charming,
Magnificent, you know, to look at, see. Very easy on the eyes.
He come up to the door
And all dressed up, you know,
He knew how to charm her, you see.
He come up there to the house, and he had his big rubber-tired buggy, you know,
They had buggies in those days…a fine buggy, and his…a fine horse.
His harness, it looked as silver to her.
Everything was charming to her eye…you know, he KNOW what to do.
And the buggy, it looked like the spokes was gold.
Red, Lord, it was just beautiful.

Whoo! And he was just IT!
He stepped out of there with all his diamonds and everything,
And all his glittering pins, whoo!
And he had his, his charm from head to feet.
And those pants he had on,
Looked like you could shave yourself with that crease in it, you know.
Oh, he was set a…he was set aside!

So that time, she seed him.
And all those charms, that’s went all through her,
Cause he knew how to do it.

So she said, “momma, this is the prettiest man in the world!”
“Look at…he’s stopping at this house, look AT him!”
And so, they looked at him.
And so, said, “sure is a pretty man!”

So, he was after due to ask her to marry him,
She was ready, cause she didn’t want nobody else to get him.
Said she would marry him.

All right, said, “you’re ready to marry.”
“What we have to do to get married right now?”
“You got the preacher?”
Brought him back there, and they MARRIED.
She had to go home with him.

He had such a fine home.
He told her all about his nice home,
How beautiful it was,
And all…he just told her everything,
And she could look at him and tell he was all right.

After a while, she noticed that she began to, you know, jerk up and down,
That way, like some bumpin’, and she looked to see how bumpy, you know,
How the road wasn’t ridin’ smooth no more.
She looked round, and then he done turned.

Two great big old horns up on his head,
Two great big red eyes, a wide mouth,
And lookin’ at…she looked at his hands,
He looked like that…an old Devil complete.
His horse was a grasshopper,
The Devil’s buggy was a road cart.

It done turned into a road cart. You know, a road cart.
See, that’s why she was bouncing so.

Then she sat there.
She was scared to death, too far from home to look back.
Didn’t know what to do.
Just sat right there, she was that scared.
Rolled on to his home,
Got out…he didn’t even tell her to get out
She just got on out.
Well, she stepped out the thing with a cry,
She didn’t know what to do.

So the Devil’s wife, she seed ‘em,
She come to the door and she called her,
Said “girl,” said “I know my husband fooled you down here.”
Said “this is the Devil’s place.”
Said “he’s…my husband’s the Devil.”

All right, so, she said, “and you’ll get back home.”
You know, being taught how not to follow the Devil.

Old Devil’s ROOSTER’s now, was the only guard dog they have, you know.
The rooster he was walking around there,
Great big steps is, “clomp, clomp.”
He sees she’s gone.
He sees the horse is gone.
He went on out to the Devil’s workshop out there,
The Devil out there was out workin’ in the workshop,
Bam-nm, Bam-nm, Bam-nm, Bam-nm, knocking on iron, tin,
He’s a workin’.

Old rooster he come out there
He says to the Devil, he says:

He THOUGHT he understood it. He stopped to listen.
Old rooster crowed again:

Ha, he’s thrown everything down, he runs to the lot
And there was his Don’t Catch Me gone!

He got on Catch Me.
And HIM and Catch Me, HIM and Catch Me got behind her,
And when she got to about five miles,
This one wheat, done turned into a great wheat field
And he had to go back home to get his wheat-cutter and cut it down
To see how to get the horse through there,
So he cut he cut that wheat down, and HIM and old Catch Me,
They was gone, they was gone.

So they got way up the road, and there up sets a GREAT big thing,
Well, it was so high, well, he couldn’t hardly get no way to get over it,
Couldn’t get around it.
So he had to go back. That was the iron bridge.
He had to go back home and get his iron saw and saw that bridge in two
He sawed, he sawed, he got the bridge sawed in two.

And then he pulled out behind her again.
And HIM and that horse, they got way up there and see that ocean of water
That one drop, it made an ocean of water.
There.
He left his…he run back, and got his oxen.
He got some drink oxen in Hell
He got them oxen to come back.
When they come back he turned them and said “drink, ox, drink. Drink, ox, drink.”
And then he looks and sees Don’t Catch Me floatin’, comin’ on back across the water.

She done made it safe!
And [he’s] comin’ back.
So, that’s the only thing that mattered,
‘Cause Don’t Catch Me had done put her landed!

So that’s just a great text, you know, if you understand it.
You see, how the Devil can tempt you
And get you into tribulation
But you got to put something BETWEEN you and him!