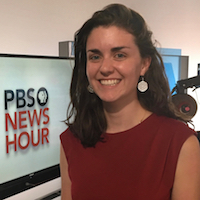 This is a guest post by Amanda Reichenbach, a 2017 summer intern with the Junior Fellows Program in the Library’s Motion Picture, Broadcasting and Recorded Sound Division. She is a history major at Yale University. During her internship, she worked with newly digitized material from the 1973 Senate Watergate hearings and the 1974 House impeachment hearings, made available online last fall by the American Archive of Public Broadcasting, a collaboration between the Library of Congress and the Boston public broadcaster WGBH.

The American Archive of Public Broadcasting recently published an online exhibit I curated last summer at the Library of Congress called “‘Gavel-to-Gavel’: The Watergate Scandal and Public Television.” For the project, I worked with over 250 hours of newly digitized material from the Senate Watergate hearings as well as coverage of the 1974 House impeachment hearings. My exhibit provides access to all the coverage, a highlights reel, an episode guide and an essay putting the coverage into historical perspective.

Longtime PBS NewsHour anchor Jim Lehrer called the Watergate hearings a “watershed event” for news and public affairs on public television when he spoke at an event at the Library in November celebrating the 50th anniversary of the Public Broadcasting Act of 1967. Before Watergate, he explained, many questioned whether the young public television network should have news content at all. The bold decision to broadcast the hearings secured a place for news on public TV and set the tone for its coverage: straightforward, balanced and with minimal bells and whistles. It also paved the way for the PBS NewsHour, bringing together for the first time as co-anchors Lehrer and Robert MacNeil. Two years later, they worked together again on a daily half-hour news program on public television that would eventually develop into the NewsHour. It all began with Watergate.

For my exhibit, my goal was to provide context for the hearings not only for public broadcasting, but also for America as a whole. To do so, I drew on a number of excellent cartoons from the Herblock Collection in the Prints and Photographs Division. Herbert L. Block, or Herblock, was one of the most influential political commentators and editorial cartoonists in American history. I chose three particularly insightful cartoons to include in my exhibit, and I’m sharing them now with permission. 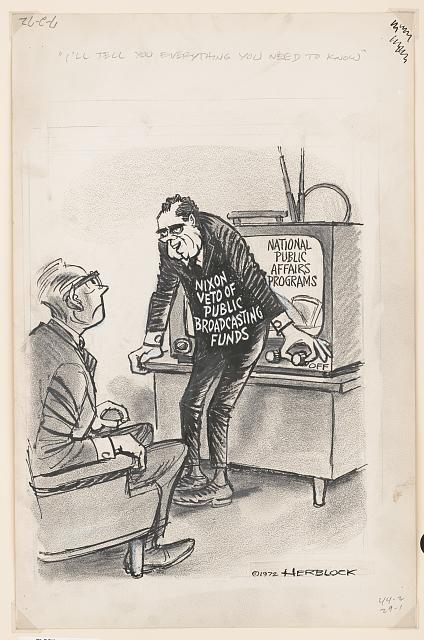 “I’ll Tell You Everything You Need to Know,” 1972. © The Herb Block Foundation. Published with permission.

“I’ll Tell You Everything You Need to Know” was published on July 2, 1972, after President Richard Nixon vetoed a bill to provide long-term funding for public television; the Public Broadcasting Act of 1967, signed by President Lyndon Johnson, did not include a plan for long-term funding that would protect against government interference. Nixon cited concerns that the Corporation for Public Broadcasting (CPB), steward of the federal government’s public broadcasting investment, was becoming “the center of power and the focal point of control for the entire public broadcasting system,” overshadowing the autonomy of the local stations. While Nixon made an argument that many public broadcasters had themselves made, this cartoon indicates the extent to which contemporary observers suspected that Nixon wanted to silence bad press from public television’s news programs.

“Violence on Television,” was published on April 19, 1973, after the White House-controlled CPB board purged its most popular public affairs shows, including “Bill Moyers Journal,” Elizabeth Drew’s “Thirty Minutes With,” “Washington Week in Review,” “World Press Review,” and even William F. Buckley’s “Firing Line.” In the following months, newspaper journalists began to take notice of the administration’s increasing hostility toward public television. Ron Powers of the Los Angeles Times wrote, “The Nixon Administration’s continuing efforts at lobotomizing this country’s broadcast media—to say nothing of the print media—constitute a horror story without end.” 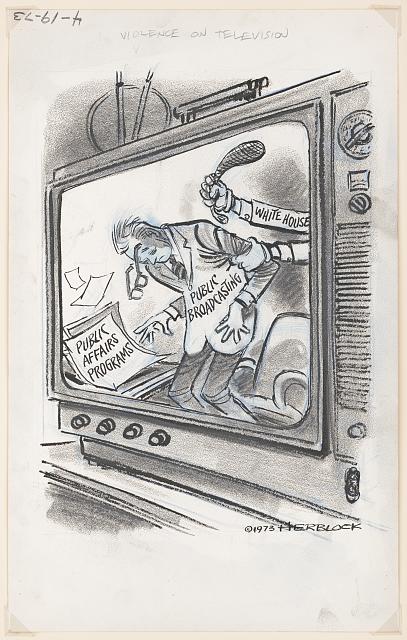 “Violence on Television,” 1973. © The Herb Block Foundation. Published with permission.

“Late Returns,” was published on May 18, 1973, the day after the Watergate hearings first aired on public television stations across America. It captures the extent to which Americans were glued to their televisions, watching the scandal unfold in prime time.

Given the administration’s hostility, and the novelty of rebroadcasting government proceedings in full during prime time, airing the hearings was something of a Hail Mary pass for public television. One imagines that Robert MacNeil and Jim Lehrer signed off that first night not knowing whether anyone had watched. As it turned out, they needn’t have worried. By the sixth broadcast, they had received over 70,000 letters from viewers, the vast majority of them favorable. Mrs. June Wilson of Atlanta wrote: 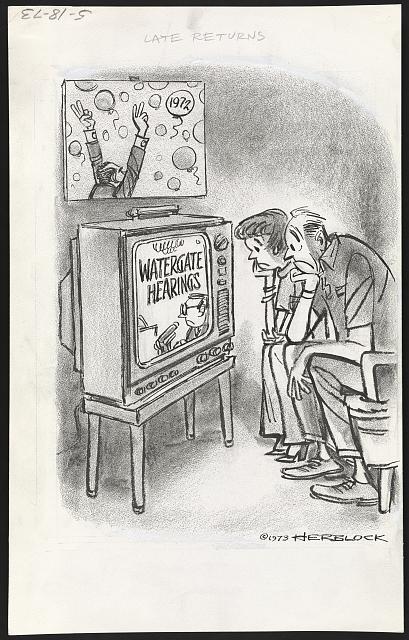 “Since the Watergate gavel-to-gavel rebroadcast began, I have not sewed on a button, taken up a hem, or put the yogurt on to make, since I work during the day I would be hard pressed to keep up with the testimony and the nuances which undeniably show themselves in such a hearing. Thus I arrive red-eyed and sleepy to work now and don’t care.”

Watergate has an important place in American history textbooks in its own right, but it was not until last summer that I discovered how important the hearings were to the history of public broadcasting.

To learn more about the topic, check out my exhibit on the American Archive for Public Broadcasting’s website!