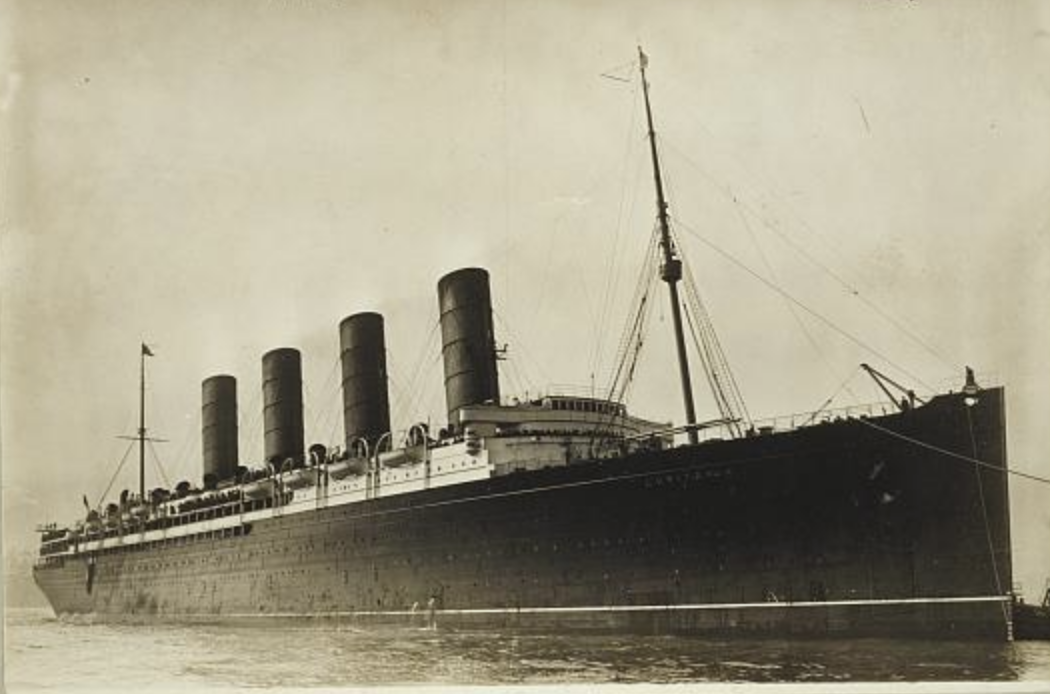 Ryan Reft, a historian in the Mansucript Division, and I put together this piece about an important segment of American journalism. Wire service reporting from Washington, particularly in this era, provided much of the nation with coverage of federal government and politics.

The Associated Press Washington Bureau News Dispatches between the tumultuous years between 1915 and 1930 are now online at the Library, providing readers and researchers with a look at how some of the biggest events of the era were reported to millions of readers across the nation.

The 378,082 images in the collection fill 375 volumes and cover World War I, women’s suffrage, the Roaring ’20s, the Jazz Age and the stock market crashes of 1929 that ushered in the Great Depression. Written in the news agency’s terse style, the dispatches show the immediacy of news as it broke, in the era in which it was lived.

One dramatic example is the afternoon of May 7, 1915, about one year into World War I. That day, a German U-Boat torpedoed the RMS Lusitania, a British liner, as it was returning from New York to Liverpool with 1,959 people aboard. The boat sank in 20 minutes, killing 1,128 people, a toll that included more than 100 Americans. It was a shell-shock to a nation that had, to that point, stayed out of the conflict.

The Lusitania. The Bain Collection, Library of Congress.

“News of the torpedoing of the Lusitania struck official Washington like a bomb,” the AP wrote in a bulletin at 2:09 p.m. that same day. “While disposed to await full details before expressing opinions, all administration officials realized that the incident was probably the most serious Washington has faced since the beginning of the war.” 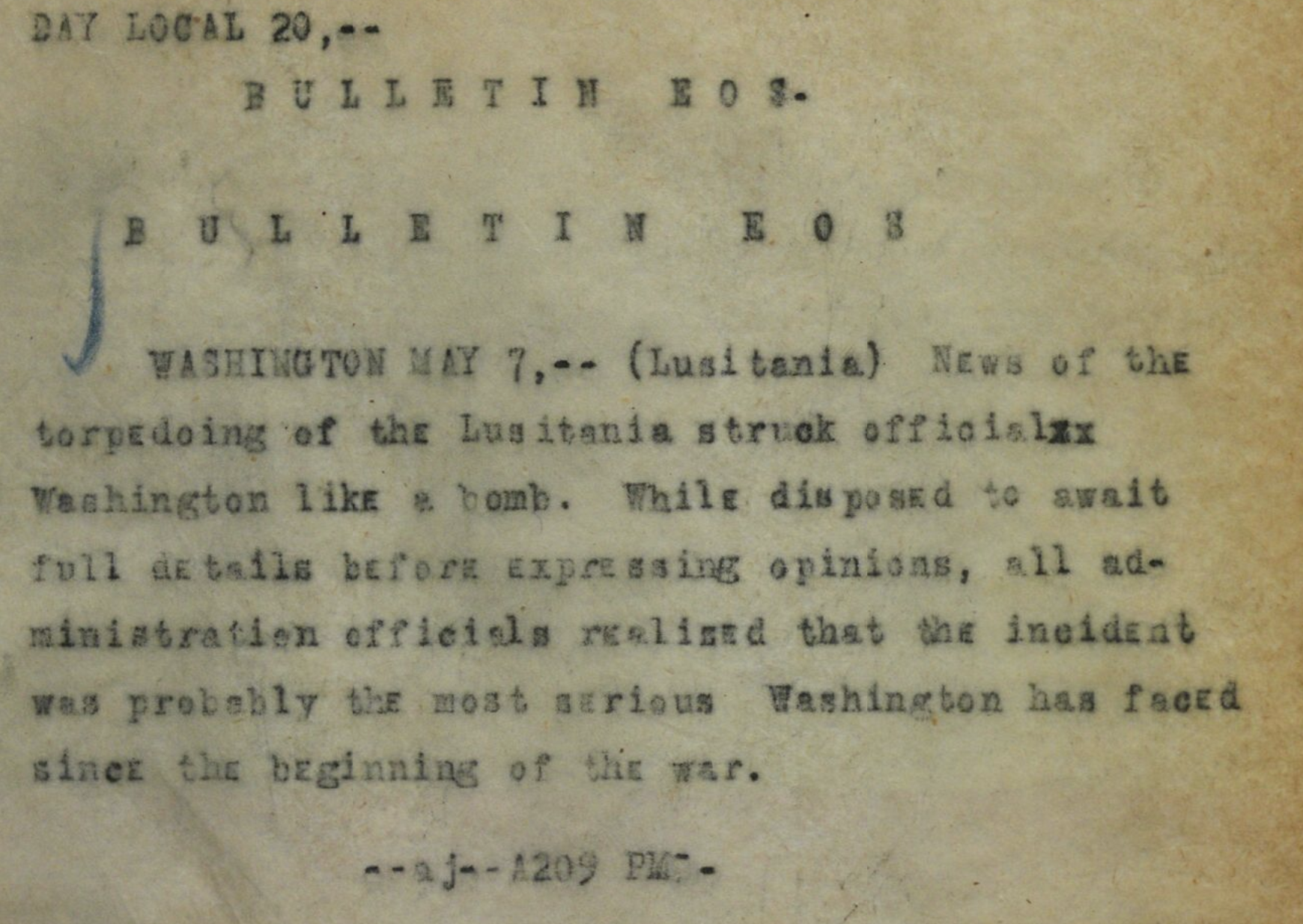 They were correct. Two years later, President Woodrow Wilson asked Congress to declare war on Germany, with Germany’s U-Boat warfare as one of the key justifications.

It was about 8:40 p.m. on April 2, 1917, when Wilson reached the Capitol Building to make his request for an official war declaration to the combined House and Senate, the AP reported. The mood was “serious and quiet.” But when Wilson came to his point and said, “We will not choose the path of submission,” the audience burst into applause. That din had scarcely died down when Wilson said, “Congress should declare that a state of war existed,” as the AP story had it, and the chamber rose to its feet in a standing ovation. 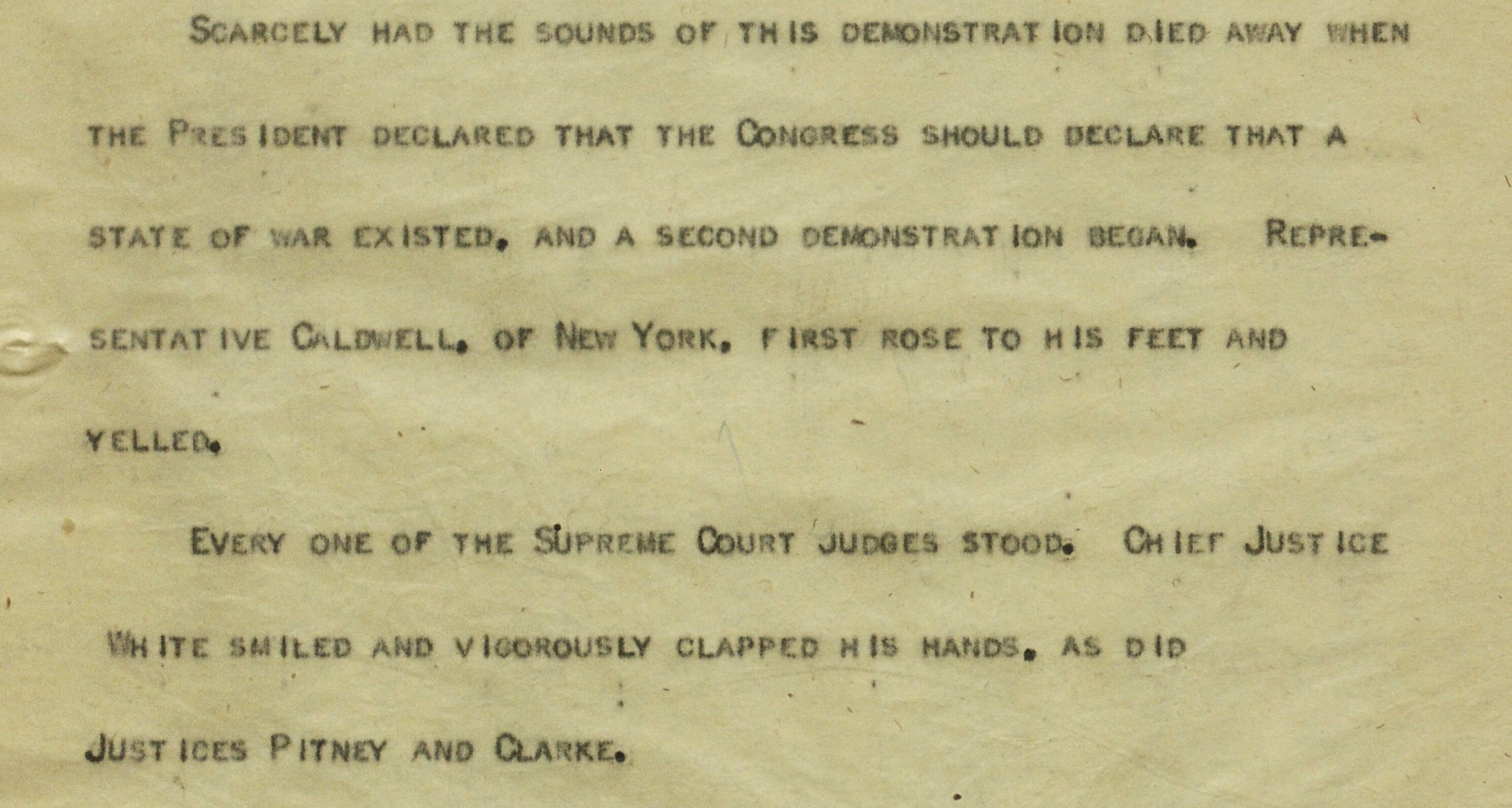 By the end, at 10:11 p.m., the chamber was in full roar. “As the President finished every person on the floor and in the galleries arose and shouted. Most of the Senators unfolded flags they wore in their upper outside coat pockets and waved them vigorously.”

The AP’s reporting of Wilson’s speech (and other major events) was transmitted across the nation and reprinted in newspapers from Maine to California. This centralized reporting came to provide a cohesiveness to daily news coverage across the nation. It was the early days of “mainstream media.”

News services had become popular in the 1840s and 1850s, greatly abetted by the invention of the telegraph in 1845. Telegraphs required short, staccato messages, and “wire” reports soon adapted to that reality. The resulting style became known as the inverted pyramid school of news writing. A reporter’s “lede,” as it came to be called, spelled out the most important item of the story in the first paragraphs, with the rest of the information following in a descending order of importance. 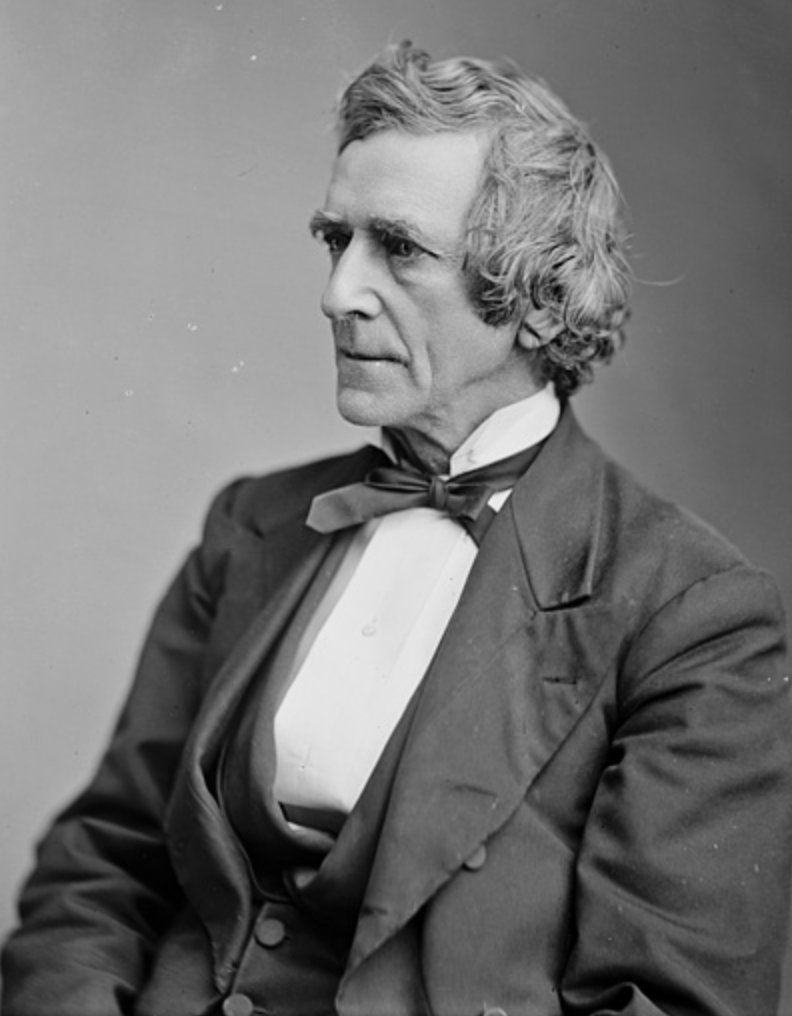 New York was the nation’s news center at the time, and newspapers there joined to form the New York Associated Press in 1846, a cost-cutting means to share basic reporting on meat-and-potatoes issues among member papers. Other regions followed suit. By 1856, after an internal reorganization of the AP, the agency’s first formal bureaus were established in Albany (the New York capital) and Washington, D.C., the nation’s capital. The AP grew to be the biggest of the wire services, but competed with others, such as the United Press, and virtually all newsrooms began to subscribe to their services. “Wire copy” became a staple phrase of American newsrooms.

But, as many a frustrated reader has lamented over the ensuing decades, reporters did not always get straight to the point, a journalistic malady known as “burying the lede.” AP Washington correspondent Lawrence Gobright was at Ford’s Theater the night of April 14, 1865, when Lincoln was assassinated. It was one of the most significant breaking news stories in American history. His reporting that night was phenomenal. He made it to the booth where the Lincolns had been sitting; at one point, someone even handed him the assassin’s gun. (He dutifully turned it over to the police.) However, in his dispatch to New York, it took him three paragraphs to get around to saying that Lincoln had been shot.

Readers can go through the AP’s dispatches of reports from these 15 turbulent years of American history and decide for themselves how reporters fared on deadline. The finding aid can help you find particular subjects and events. The site has stories listed chronologically.

Subscribe to the blog— it’s free! — and the largest library in world history will send three cool stories per week straight to your inbox.