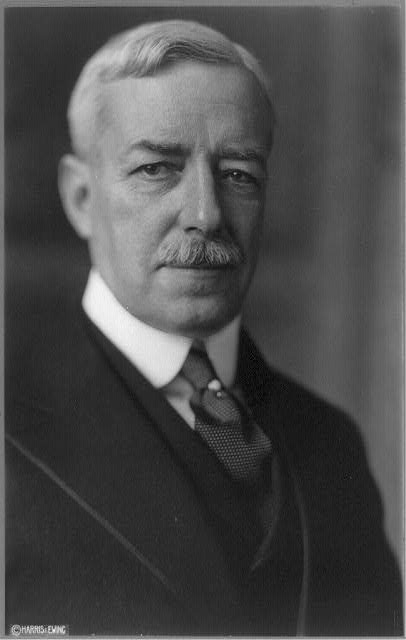 This is a guest post by Sahr Conway-Lanz, a former Manuscript Division historian.

Robert Lansing spent the height of his career in the shadow of giants but left a paper trail that ensured the world would know his side of the story. Now the Library of Congress has made an important segment of former Secretary of State Robert Lansing’s papers available online.

Lansing worked alongside two towering historical figures, Woodrow Wilson and William Jennings Bryan. He served as the number two man at the State Department under William Jennings Bryan, who was President Wilson’s secretary of state from 1913 to 1915. Popularly known as “the great commoner,” Bryan had led the Democratic Party for over 20 years and was its presidential nominee three times – in 1896, 1900 and 1908.

When Lansing succeeded Bryan in 1915 as secretary of state, Lansing had his chance to be a statesman of global stature. During his leadership of the State Department, where he served until 1920, the United States entered World War I, declaring war against Germany in 1917. Lansing also represented the United States at the Paris Peace Conference that negotiated the end to the Great War and shaped the world international order that followed. 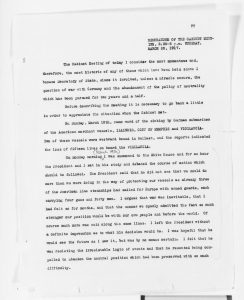 Lansing’s account of a March 20, 1917, meeting of Wilson’s cabinet preceding the decision to go to war against Germany.

Yet, even with his important positions during these earthshaking events, Lansing remained in the shadow of President Wilson. Wilson took the lead in shaping U.S. foreign policy during these years and left Lansing out of much of his decision-making. The president instead conferred closely with Edward House, his informal adviser on international affairs and emissary to wartime allies.

Instead of quietly resigning himself to obscurity, Lansing set himself to writing. In eight journal volumes, Lansing recorded his thoughts, observations and opinions on American foreign policy and Wilson over the span of eight years. He called these pieces his “private memoranda.” The typescripts of his neatly written memoranda, which Lansing had made and indexed, run over 600 pages.

The memoranda cover many of the international issues Lansing confronted as secretary of state, including the Mexican Revolution and the Lansing-Ishii Agreement on U.S.-Japanese relations. They focus, however, on World War I, the Paris Peace Conference and Wilson’s leadership. 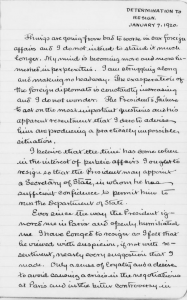 Lansing’s reflections from January 7, 1920, about his growing rift with Wilson and his determination to resign.

One remarkable memorandum provides the most detailed account available of the March 20, 1917, cabinet meeting in which Wilson asked each of his cabinet members for his opinion on whether the United States should declare war on Germany. Wilson kept his feelings toward Germany to himself, but his cabinet was unanimous in support for war, even though several members had previously been vocal supporters of Wilson’s long-standing policy of neutrality in the Great War.

In his memoranda, Lansing had much to say about his disagreements with Wilson. Lansing was especially critical of Wilson’s negotiation of the Treaty of Versailles, the peace agreement hammered out in Paris in 1919. He believed Wilson placed too much faith in the League of Nations and refused to compromise with the Senate in attempting to seek congressional approval of the peace treaty. After Lansing’s opinions became public in congressional hearings on the treaty, Wilson asked for his secretary of state’s resignation.

The details Lansing recorded in his private memoranda helped him to write three books after he left office on the Paris Peace Conference and his experiences during World War I. Much of the criticism that has been leveled at Woodrow Wilson’s foreign policy has utilized Lansing’s critiques as presented in these documents.

Lansing may have felt overshadowed, but he was not silenced. His private memoranda, along with his desk diaries and notes – now available online – continue to let him have his say.