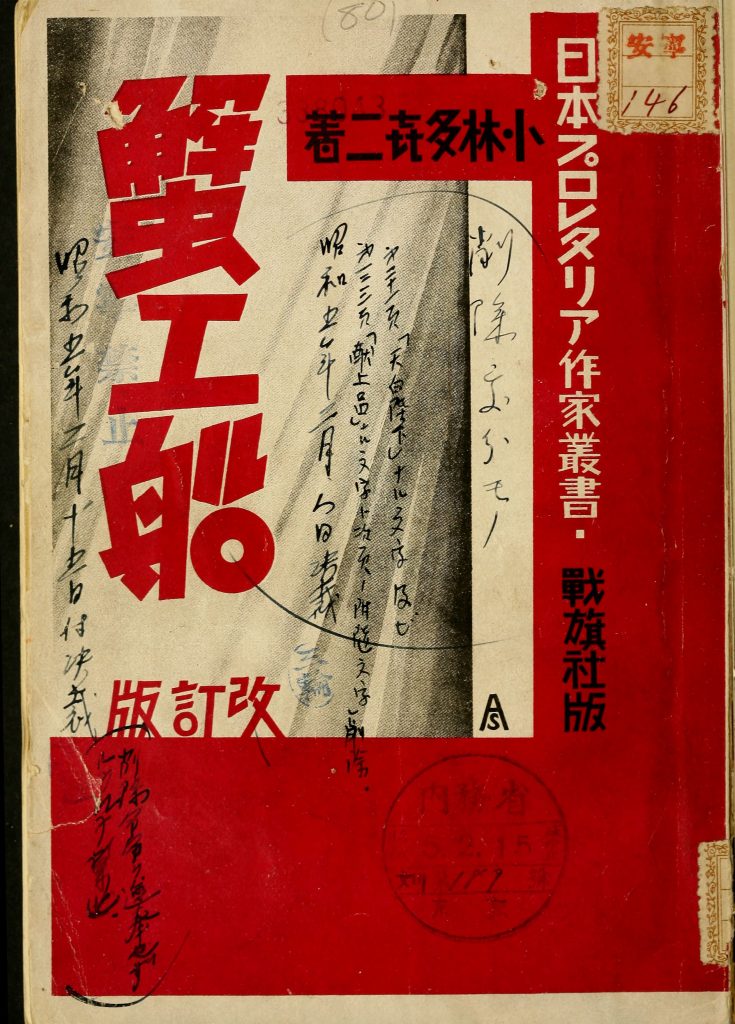 This is a guest post by Benny Seda-Galarza of the Library’s Communications Office.

“Kanikōsen” (“The Crab Cannery Ship”) by Takiji Kobayashi (1903–33) is one of the most famous works of Japanese proletarian literature. On the cover of this copy, the censor’s comments indicate the page numbers of passages that were selected for deletion and note concerns about protecting “public peace and order.”

The Library’s Asian Division has digitized an archive comprising more than 1,000 marked-up copies of monographs and galley proofs censored by the Japanese government in the 1920s and 1930s. The Japanese Censorship Collection reveals traces of an otherwise-hidden censorship process through marginal notes, stamps, penciled lines and commentary inscribed by the censors’ own hands.

Each of these books is “uniquely different from all other existing copies and editions of similar titles in Japan and elsewhere, making this collection a rich archive here at the Library of Congress for the historical study of censorship,” said Librarian of Congress Carla Hayden.

In prewar World War II Japan, the Home Ministry was among the most powerful of government entities. Not only was it tasked with censoring publications, it also held jurisdiction over police, infrastructure, elections, public health and religious affairs. Following Japan’s defeat, the ministry’s censorship library was seized by the Allied forces and sent to the Washington Document Center in the United States.

It was later transferred to the Library of Congress, along with massive volumes of books and other materials requisitioned from other official institutions, including the Ministry of Foreign Affairs, the Japanese Imperial Army and the South Manchurian Railway Company. The Library digitized the Japanese Censorship Collection in collaboration with Japan’s National Diet Library. 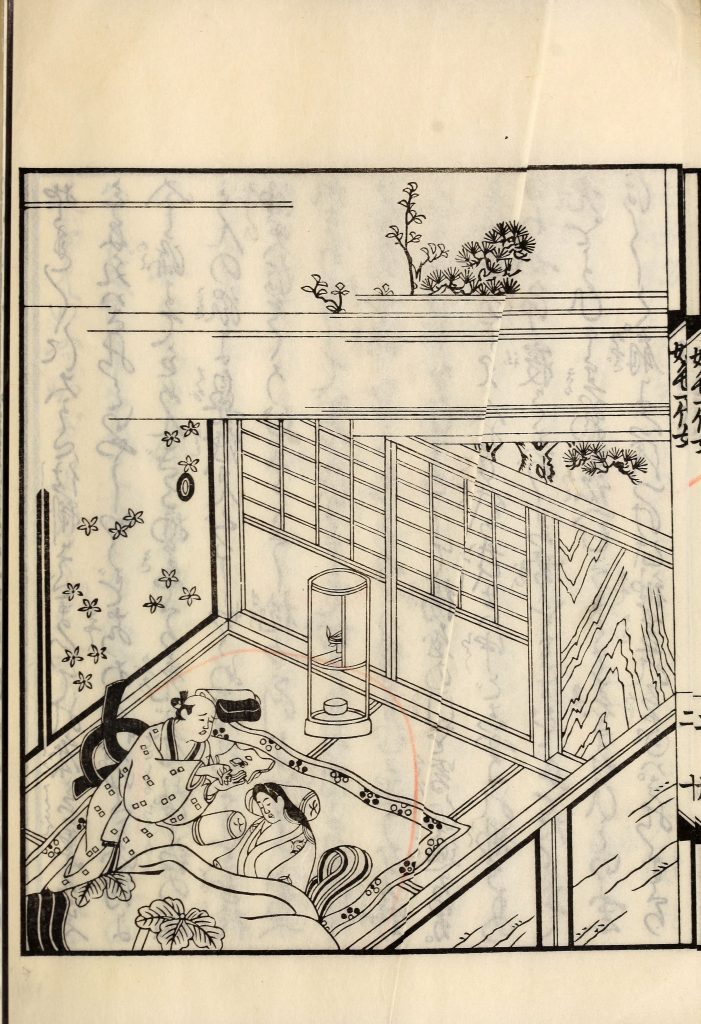 Ihara Saikaku’s “Eiri kōshoku ichidaionna” (“The Life of an Amorous Woman) is a classic of late-17th-century vernacular fiction. The censor has penciled a light red circle around the lovers in the middle of the page, indicating an offending item.

“Prior to World War II, censorship prevailed in Japan with the official aim of protecting peace and order in society from subversive ideologies and guarding traditional customs from obscenity. Toward these ends, censors suppressed, deleted or revised publications that they deemed a threat to social and political stability,” said Eiichi Ito, a Japanese reference specialist in the Asian Division.

The majority of the collection dates from between 1923, when the Home Ministry’s building in Tokyo burned down in the Great Kanto Earthquake, and 1945, when the imperial Japanese government’s surrender marked the end of World War II.

Common targets of censors included works that espoused socialist ideologies or contained sexual themes, but many ultranationalist groups, especially those promoting antigovernment activities, drew the attention of the censors’ red pens as well. Their decisions are reflected by handwritten comments and Home Ministry seals stamped on copies of the books.

At present, 247 of the censored titles are available on the Library’s website for off-site viewing, but this number will continue to grow as more titles enter the public domain. All 1,327 items in the collection can be viewed on site at the Library.

For an in-depth discussion of the collection’s highlights, read this blog post by the Asian Division’s Eiichi Ito. 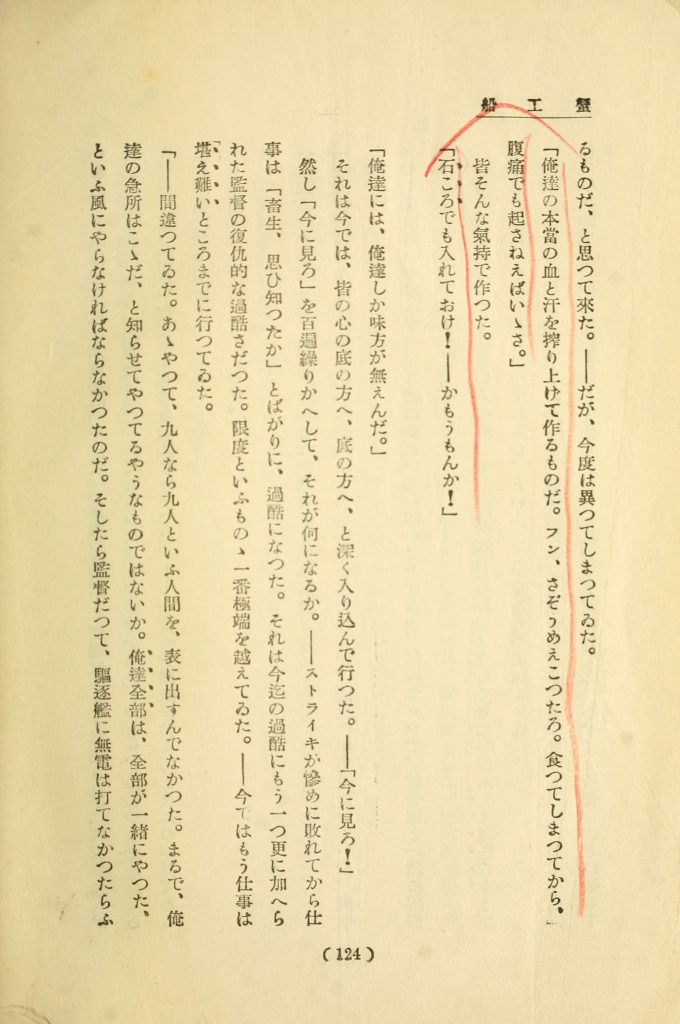 In this excerpt from “Kanikōsen,” workers on a factory ship have come to realize the nature of their exploitation at the hands of the ship’s ruthless manager. The text underlined in red by the censor reads in part: “‘This canned crab is made out of our real blood and sweat.”