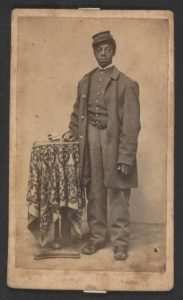 This photograph is featured in the Gladstone Collection with documents from 1869 related to Gilbert Montgomery of the 4th United States Cavalry.

The Library of Congress is delighted to launch online in time for African-American History Month the William A. Gladstone Afro-American Military Collection, consisting of about 500 items. Gladstone was a historian and author of books about black Civil War troops.

The collection spans the years 1773 to 1987, with the bulk of the material dating from the Civil War period, 1861–65. The collection consists of correspondence, pay vouchers, orders, muster rolls, enlistment and discharge papers, receipts, contracts, affidavits, tax records, miscellaneous military documents and printed matter. 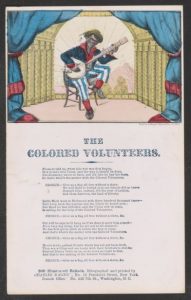 A Civil War-era broadside featuring the song “The Colored Volunteers.”

Revolutionary War items are primarily pay vouchers to Connecticut blacks who served in the Continental Army. World War I is represented by the papers of Lieutenant Edward L. Goodlett of the 370th Infantry, 93rd Division.

The Library of Congress purchased the collection from Gladstone in 1995. It has been kept in the numerical order established by him, which is neither topical nor chronological.

For a chronology of key events in African-American military service, click on the screen shot below! 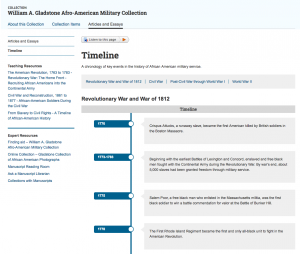