This post by Anne Holmes of the Library’s Poetry and Literature Center was first published on “From the Catbird Seat,” the center’s blog. 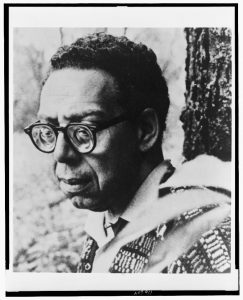 National Poetry Month is here, and we’re over the moon to announce the release of 50 additional recordings from the Archive of Recorded Poetry and Literature, now available to stream online.

The archive—a collection dating back to 1943, when Allen Tate was consultant in poetry—contains nearly 2,000 audio recordings of celebrated poets and writers participating in literary events at the Library of Congress, along with sessions recorded in the recording laboratory in the Library’s Jefferson Building. Most of these recordings were originally captured on magnetic tape reels and have only been accessible by visiting the Library in person.

We have more excitement in store as Poetry Month progresses, so stay tuned. For now, put on those headphones, blast those speakers and explore what the Archive of Recorded Poetry and Literature has to offer.