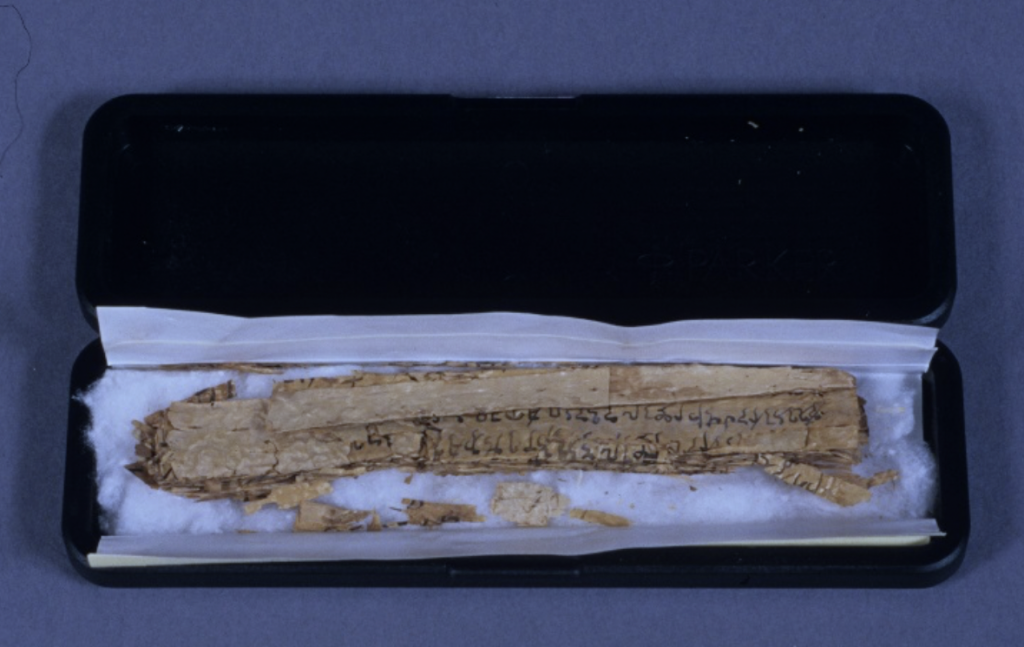 The following is a guest post by Jonathan Loar, a South Asia reference librarian in the Asian Division. It is adapted from a longer post on the 4 Corners of the World blog.

The Gandhara scroll as it arrived at the Library in a pen case. Asian Division . Photo: Holly Krueger.

The Library’s Gandhara Scroll, one of the world’s oldest Buddhist manuscripts, has been painstakingly preserved and digitized, making it available to readers online after years of delicate work. The document, written on a birch bark scroll about 2,000 years ago, offers rare insight into the eary history of Buddhism.

The story of its preservation at the Library began in 2003, when the Library acquired the scroll from a private collector. It arrived, in pieces, in an ordinary pen case, accompanied by a handwritten note: “Extremely fragile, do not open unless necessary.” Its digitization was completed earlier this year by the coordinated efforts by the Digital Scan Center, Conservation Division and Asian Division.

The scroll originated in Gandhara, an ancient Buddhist kindgom located in what is today the northern border areas of Afghanistan and Pakistan. Surviving manuscripts from the Gandharan realm are rare; only a few hundred are known to still exist.

Understanding the history of the region helps us realize the significance of this scroll. Gandhara was a major cultural crossroads between Greek, Iranian, and Indian traditions. The region was under the rule of numerous kings and dynasties, including Alexander the Great, the Mauryan emperor Ashoka and the Kushan emperor Kanishka I. Between the reigns of reigns of Ashoka and Kanishka I, Gandhara became a major seat of Buddhist art, architecture and learning. One of the region’s most notable characteristics is the Hellenistic style of its Buddhist sculptures, including figures of the Buddha with wavy hair, defined facial features, and contoured robes reminiscent of Greco-Roman deities.

Gandharan scrolls were typically buried in terracotta jars and interred in a stupa, a dome-shaped structure often containing Buddhist texts or relics. The Library’s scroll retains 75 to 80 percent of the original text, missing only its beginning and end. Its preservation is due in part to the region’s high altitude and dry climate. The completeness of the scroll makes it noteworthy because many of the other surviving Gandharan manuscripts are even more fragmentary.

Th scroll is written in Gandhari, a derivative of Sanskrit, and styled in a script known as Kharoshthi, thought have its origins in Aramaic. Kharoshthi reads from top to bottom and right to left. 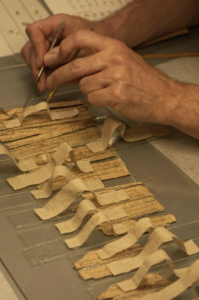 The Library’s scroll has been called the Bahubuddha Sutra, or “The Many Buddhas Sutra,” in the scholarship of the University of Washington’s Richard Salomon, one of the world’s leading experts on Gandharan Buddhism and the Gandhari language. Salomon explains that the likely identification of this scroll as the Bahubuddha Sutra stems from its similarity to a Sanskrit text of the same name found in the much larger Mahavastu, or “Great Story,” a biography of the Buddha and his past lives. Locating a very early attestation of the Bahubuddha Sutra in the Gandhari language thus sheds new light on the formative period of Buddhist literature.

Many people are probably familiar with the story of Siddhartha Gautama, who reached enlightenment underneath the Bodhi tree in Bodh Gaya in eastern India and became the Buddha. He lived about 2,500 years ago. Various Buddhist traditions, including the very early Mahayana tradition of ancient Gandhara, also refer to previous buddhas whose lives stretch across a cosmic understanding of history, eons and eons before the birth of Siddhartha Gautama. The Library’s Gandharan scroll is narrated in the voice of the Buddha summarizing very brief biographies of thirteen buddhas who came before him, followed by his birth and enlightenment, and ending with the prediction of the future buddha, Maitreya.

With regard to conservation, it is safe to say that the Gandhara scroll is one of the most complicated and fragile items ever treated at the Library of Congress. After its arrival in 2003, it took several years of thought and planning to devise a treatment strategy. A memorable anecdote from this time period is that the conservator practiced her unrolling technique on a dried-up cigar—an item that only approximates the difficulty of working with a compacted birch bark scroll. 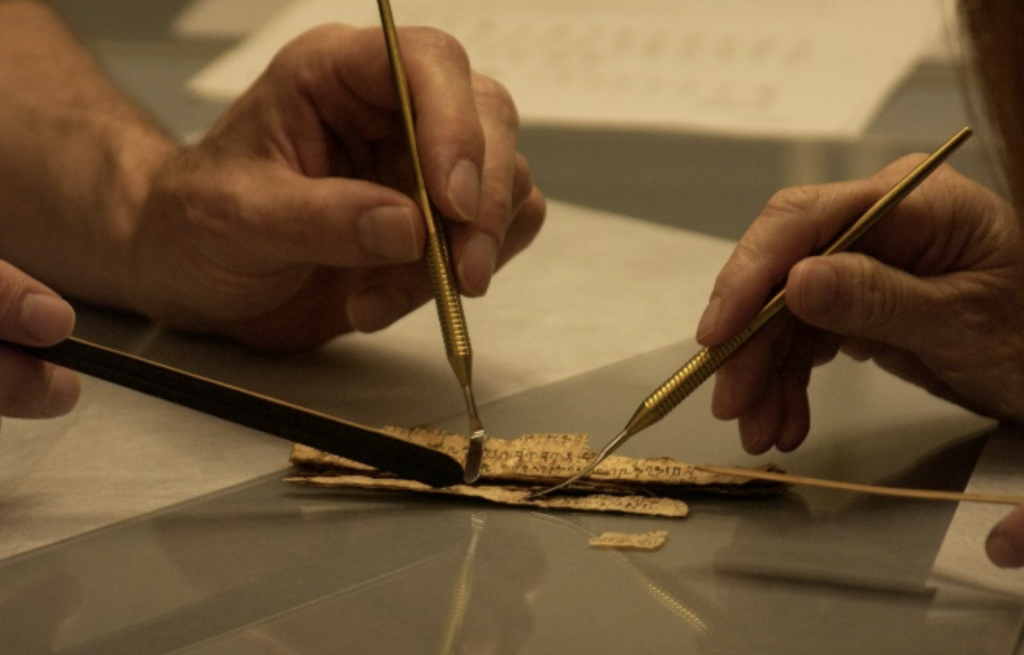 Conservators use gold-handled dental tools and specially-made bamboo lifters to work on the scroll. Photo by Yasmeen Khan.

With assistance from a conservator at the British Library who had worked on similarly ancient materials, the treatment plan was put into action: Gradual humidification over a few days, careful unrolling by hand with precision tools on a sheet of inert glass, followed by placing another sheet of glass on top once the scroll was completely unrolled. The edges were then sealed. The six largest scroll fragments — which contained the majority of the text — were placed inside one glass housing, while another was used for the more than 100 smaller fragments, some with only parts of a single syllable. Both glass housings were then placed in specially constructed drop spine boxes designed to protect the scroll from damage caused by vibration.

Glass housing, shock-absorbing foam, sturdy boxes—all of these contribute to the scroll’s long-term preservation. But even in its well-preserved state, the physical scroll is too fragile for public display. This is the reason for the excitement behind its new digital reincarnation, a format in which this unique item can be shared with a global audience. 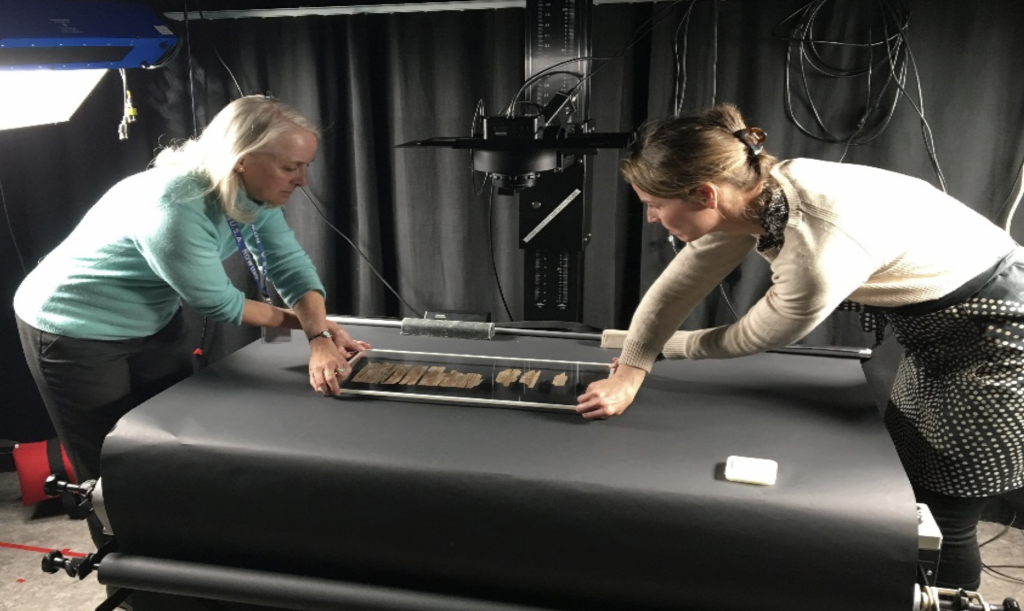