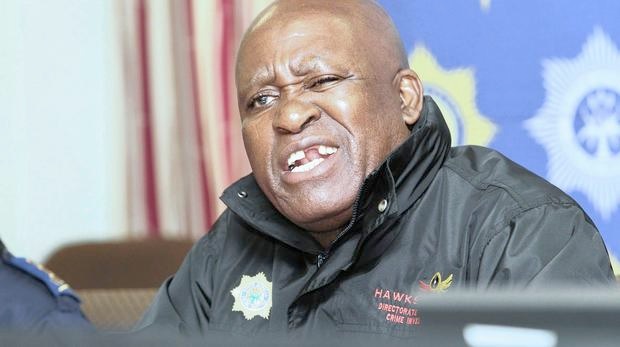 Former head of South Africa’s Directorate for Priority Crime Investigation, also known as the Hawks, Lieutenant-General Berning Ntlemeza reported for duty on Monday morning despite being relieved of his duties.

Former head of South Africa’s Directorate for Priority Crime Investigation, also known as the Hawks, Lieutenant-General Berning Ntlemeza, reported for duty on Monday morning despite being relieved of his duties.

According to reports, Ntlemeza entered the Hawks office building undetterred through a back entrance, to avoid the media contingent stationed in front of the building.

A High Court recently ruled that Ntlemeza could not stay in his position as head of the Hawks, as he lacked the honesty, integrity and conscientiousness needed to hold public office.

In line with the court’s ruling, Police Minister Fikile Mbalula fired Ntlemeza and replaced him with Lieutenant-General Yolisa Matakata, who has been acting in that position for close to two weeks already.

Last week, however, Ntlemeza said that only Parliament could fire him and that he would return to work. His lawyer then confirmed that an appeal against the ruling had been lodged at the Supreme Court.

The Democratic Alliance has called on Minister Mbalula to act decisively against Ntlemeza.

The DA’s Zakhele Mbele has labelled Ntlemeza’s return to work in defiance of the court order as unacceptable.

“It really amounts to a violation of the rule of law. It’s an escalation of the crisis we already have in the governance and leadership of the Hawks if Ntlemeza is able to stay on and interfere in the effectiveness of the Hawks,” Mbele said.

It is not clear how the police ministry plans to handle the situation with Ntlemeza, as it appears he was able to access the building without hinderence.

A small group of DA supporters have picketed outside the Hawks office, protesting the former Hawks chief’s return to work.