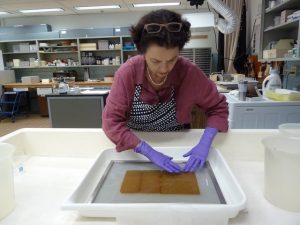 This is a guest post by Sylvia Albro, a senior paper conservator in the Conservation Division. Earlier this month, the Library released online the Omar Ibn Said Collection, including Ibn Said’s autobiography, the only known extant autobiography written in Arabic by an enslaved person in the United States. A wealthy and educated man, Ibn Said was captured in West Africa and brought to the U.S. as a slave. He wrote his autobiography in 1831.

Conservator Sylvia Albro treats the cover of Ibn Said’s autobiography in a solution of deionized water.

As soon as Omar Ibn Said’s autobiography entered the Library of Congress collections, it came to the Conservation Division for evaluation. The manuscript was clearly fragile — its cover and text pages were torn in many places, and some pages were detached from the binding. Sewing thread had cut through pages and cover paper, causing breaks and tears along the spine as well. Compounding these issues, for much of its life, the manuscript seems to have been kept folded in half, as if to fit into a slim pocket. This strong center fold had caused multiple tears. Now, unfolding each page risked losing fragments and detaching other pages, calling for immediate conservation attention before the manuscript could be studied or displayed.

Together, a team of Library conservators and curators formulated a plan to treat and house the manuscript. It involved removing and repairing the cover; assessing the inks and papers of both the cover and the text for their degree of deterioration; and making repairs to the manuscript paper. The plan specified that, afterward, the original would be scanned and a facsimile created for scholarly use. As always, the process would be fully documented.

Conservators first removed the cover and its tight sewing, discovering the soft and thick cotton thread originally used to hold the manuscript together through the center fold. Both threads were made of cotton fiber, but the original sewing thread matches that used to sew several of the other Arabic manuscripts in the Omar Ibn Said Collection that come from West Africa. To open and repair the text, both cover and original sewing threads were removed and saved with documentation. 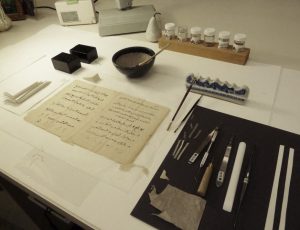 Tools and materials conservators used to mend the manuscript.

Once the text pages were separated, the ink was examined under a microscope and with ultraviolet light illumination. The type of ink is iron gall, which is inherently acidic and can cause damage to the paper underneath. In the case of Ibn Said’s writing, there was some sinking of the ink to the opposite side of the page, but mostly it appeared crisp and in reasonably good condition. A few heavily inked areas had, however, broken through the lightweight text paper.

Interestingly, two different writing pens were used for Ibn Said’s text. Where he wrote of his own life, his pen had a narrow nib, but where he wrote in prayer verse, his pen had a wider, flatter nib like the reed pen used by Arabic scribes. Photomicrographs — photos taken under a microscope at high magnification — of the ink were taken, and conservators will monitor changes in ink and paper deterioration over time.

The cream-colored text paper was made by a papermaking machine with a woven cloth screen. It has no watermark, but it has an even texture and is made from good-quality fiber. Its pH is lower than the optimal range, but after 200 years of natural aging, it remains in reasonably good condition, aside from physical damage.

To mend text pages, we used a variety of adhesives and Japanese tissues. First, we humidified the broken spine pieces of the pages and flattened them under blotters and weights. We aligned split areas of paper with no text and mended them invisibly with tissues of different weights and colors, applied with wheat starch paste. Areas of the paper with ink present were mended with transparent tissue precoated with a hydroxylpropyl cellulose adhesive. All mends remain reversible in the future. After treatment, we stored the manuscript in an acid-free environment with a soft Japanese “mitsumata” paper interleaf isolating the text from the cover.

Unlike the text, the cover was brittle, made of a poorly processed pulp with visible undigested straw fibers, and with a suboptimal pH level. Discoloration from the cover had transferred to the adjacent text papers at the front and back of the manuscript. The cover ink was stable, meaning that the cover could be immersed in several baths of alkaline water until discoloration was no longer released from the paper and the surface pH rose to a neutral level. A layer of gelatin sizing was applied overall to provide greater strength for future handling. Losses in the cover were repaired with layers of toned Japanese “usumino” paper.

After scanning, the mended pages and cover were reassembled. They were not resewn, to avoid making new holes in the paper and orienting the text permanently in the wrong direction — the cover is meant to open right to left. A custom drop-spine box made from conservation quality materials was constructed to house the ensemble.

In addition to Ibn Said’s autobiography, conservators treated and rehoused the 41 other items in the Omar Ibn Said Collection.

Watch the video below for more about Ibn Said’s autobiography and its conservation at the Library.