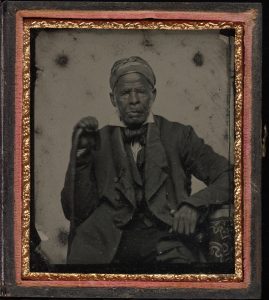 This is a guest post by Adam Rothman, a professor of history at Georgetown University and an expert on the history of slavery and abolition in the Atlantic world. Last fall, he was a distinguished visiting scholar at the Library’s John W. Kluge Center. Here Rothman writes about the Omar Ibn Said Collection, which the Library released online earlier this month. A wealthy and educated man, Ibn Said was captured in West Africa and brought to the U.S. as a slave. His autobiography, included in the collection, is the only known extant autobiography written in Arabic by an enslaved person in the U.S.

While working at the Kluge Center for Scholars at the Library of Congress in fall 2018, I had the good fortune to be asked to collaborate with the team processing the newly arrived Omar Ibn Said Collection. The Library needed someone to transcribe the English-language letters and other documents in the collection. Knowing the importance of Omar Ibn Said’s autobiography and eager to contribute to the project, I happily obliged.

As a historian of American slavery, I’ve transcribed my share of documents, and I like to think that I have a knack for deciphering 19th-century handwriting. But transcribing the documents involves more than just solving the riddles of the writing. The extremely close reading that is required forges a more intimate bond with the sources and a desire to dig deeper into their meanings. The challenge of transcribing these documents pulled me into a world that I had known very little about.

A Fula scholar from the West African kingdom of Futa Toro, Ibn Said was captured in war around 1807, sold “into the hands of the Christians” and shipped across the Atlantic to Charleston, South Carolina, to endure a life of perpetual slavery in the United States. He was in his late 30s when he endured the middle passage and about 61 years old when he wrote his autobiography in Arabic in 1831. By then, he apologized, his eyesight had gone downhill and he had forgotten most of his native language. His autobiography tells of the hardship of his experience of enslavement, but it also expresses gratitude for the kindness of his American owners, the Owen family. It’s a unique, poignant and enigmatic narrative. 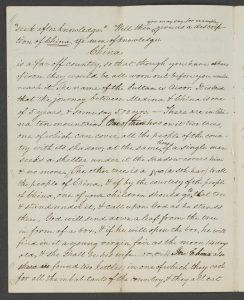 Ibn Said’s autobiography has been known to scholars for decades. A translation was published in the American Historical Review in 1925, with an introduction by none other than J. Franklin Jameson, who would soon thereafter become the chief of the Manuscripts Division at the Library of Congress. More recent scholars of Atlantic slavery have unearthed additional writings by Ibn Said, prepared new translations of his work and revisited the question of his identity amid a broader rediscovery of the influence of Islam in the African Atlantic. But what the documents in the Omar Ibn Said Collection also reveal is that scholarly interest in Ibn Said goes back to colonizationists and ethnologists of the 19th century, who took a keen interest in Ibn Said for their own agendas.

There are many fascinating documents in the collection aside from Ibn Said’s autobiography. One that really caught my attention is Rev. Isaac Bird’s translation of an Arabic manuscript written by Muhammed Dukur, which was sent to Theodore Dwight, the secretary of the American Ethnological Society, by President John J. Roberts of Liberia. This short treatise contains a brief but remarkable description of China from a West African perspective.

“China is a far off country,” writes the author, “so that though you have shoes of iron they would be all worn out before you would reach it.” The author reports that China has 10 mountains, and on one of the mountains there are two trees. One of the trees casts a shadow that covers the entire country, and the other grows virgins. This fantasy tells us something about West African knowledge of China in the middle of the 19th century, and the fact that it was transmitted by the president of Liberia to an ethnologist in New York tells us something else about the global circuits of knowledge of that era.

While immersed in the Ibn Said Collection, I made a discovery of my own that I hope will add to our own world’s ever-growing knowledge about Ibn Said. Searching the Library of Congress’ massive online newspaper database, Chronicling America, I came across his obituary in a North Carolina newspaper dated Aug. 19, 1863 — a rare thing indeed for an American slave. The obituary praised Ibn Said (or, as it called him, “Uncle Moreau”) as “a remarkable Negro” and a pious Christian. He died at the age of 93, having lived a remarkably long life. But it was not quite long enough to see freedom again before he died.