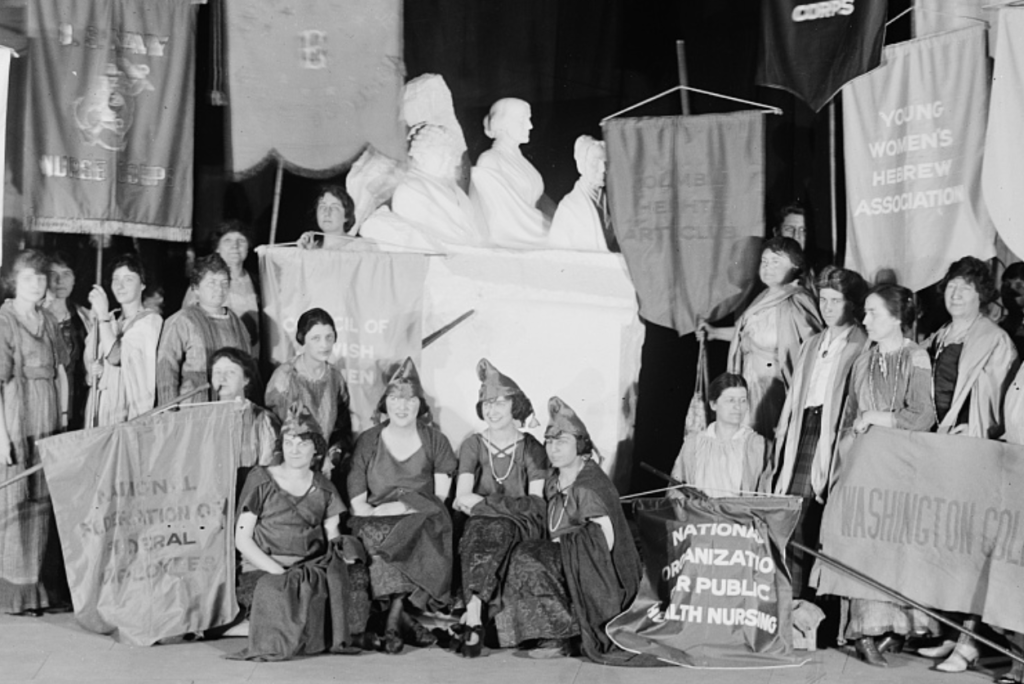 This is a guest blog by Elizabeth A. Novara, a historian in the Library’s Manuscript Division.

One hundred years ago, on Feb. 15, 1921, over 70 women’s organizations gathered in the U.S. Capitol rotunda for the unveiling of the statue “Portrait Monument to Lucretia Mott, Elizabeth Cady Stanton and Susan B. Anthony.”

The National Woman’s Party (NWP), one of the leading women’s suffrage organizations, had officially presented the statue as a gift from the women of the nation to Congress’ Joint Committee on the Library several days earlier. The dedication ceremony marked both the 101st anniversary of the birth of Susan B. Anthony and the ratification of the 19th Amendment the previous summer. The latter capped more than 70 years of activism for women’s suffrage.

Millions of women voted in their first presidential election in November 1920 and they were filled with hope and excitement for changes yet to come.

“Portrait Monument” also represented a high point in sculptor Adelaide Johnson’s career. In 1893, Johnson exhibited several portrait busts of well-known suffragists, including Anthony, Stanton and Mott, as well as pioneer physician Caroline B. Winslow, at the Woman’s Pavilion of the World’s Columbian Exposition in Chicago.

In 1896, she married English businessman Alexander Frederick Jenkins. It was a unique event, held not in a church but in her Washington, D.C., studio. She regarded the statues as her bridesmaids. Jenkins took his wife’s last name. The ceremony was presided over by a woman.

A month later, Susan B. Anthony wrote to Johnson, supporting her innovative wedding, noting that “he and you have a perfect right to make your arrangements, as to name, residence, and mode of living, to please yourselves.” Anthony also expressed her wish that Congress would purchase the busts exhibited in Chicago for installation in the new Library of Congress building, then under construction and slated to open in November 1897. She wrote, “their busts ought to stand in some of the niches in that mammoth building, the taxes to build which have been wrung from the hard earnings of the women of this nation as well as from those of the men.” Johnson’s marriage did not endure (she divorced in 1908) and her portrait busts were not placed in the Library. But she did use them as the basis for the larger “Portrait Monument.” 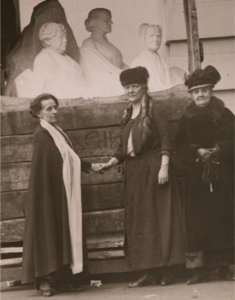 The convention also made clear that the NWP was the only women’s organization at the time that supported a federal equal rights amendment, later known as the ERA. Women’s social service and labor organizations saw such an amendment as having the potential to undo protective labor legislation for women. In addition, the NWP’s focus on achieving equal rights for women continued to take precedence over racial equality. African American women in attendance at the convention objected that they and their issues were overlooked in favor of well-known white speakers. After the successes of the suffrage movement, the women’s movement struggled to redefine itself without the single issue of suffrage that had bound various women’s groups together.

Soon after the dedication ceremony, “Portrait Monument” was moved to a less prominent location in the Capitol’s crypt, removed from display in the rotunda until 1997. Much like the statue’s overdue reemergence in the rotunda, it would take decades for women’s rights to again gain prominence in the nation’s discourse. It would also take years for women’s organizations to support the goal of equality for all. Slowly but surely, the struggle continues.