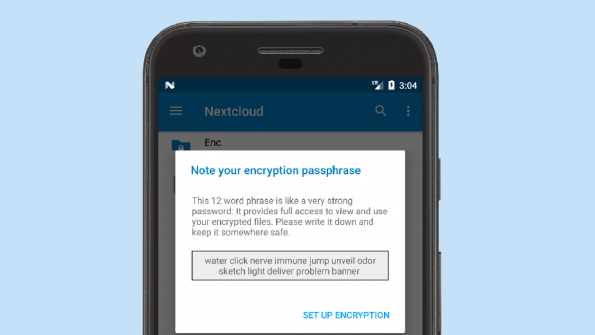 There’s another reason for taking a second look at Nextcloud as a replacement for DropBox — or even for Google’s office apps or Microsoft’s Office 356. Full encryption is on the way to the open source host-it-yourself client/server software.

A year-and-a-half ago when Nextcloud was first forked from ownCloud, it was basically for syncing, storing and sharing files.

“The elevator pitch,” Nextcloud’s founder and managing director told me a few months back, “was that we were a Dropbox replacement.”

“Replacement” might not be exactly the right choice of words. It might be more precise to say that it supplied Dropbox functionality, but on the user’s own server. Dropbox is SaaS, and it’s use is on the service’s servers. That can be problematic for regulated industries such as finance and health care that might be required to store sensitive data on premises. It’s also a deal breaker for companies who prefer to keep their secrets on their own metal.

And because the software is open source, it’s free, with support contracts available but optional. Being open source also means that companies can use their in-house DevOps teams to modify the code to suit specific requirements. That’s usually not necessary, however. It has a modular design, meaning it’s usually customizable enough through plugins.

It’s also in rapid development. Since the fork that gave it birth, Nextcloud has evolved beyond being merely a Dropbox drop in.

“In a way, it’s like the first true Office 365 killer,” is how Karlitschek put it.

That assessment isn’t far off the mark. These days, in addition to allowing the simple sharing of files, Nextcloud can be used for video conferencing, can connect to mobile devices by way of Android and iPhone apps, can allow…