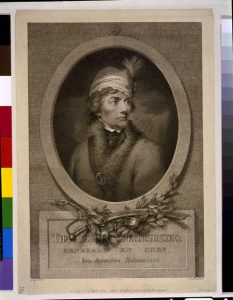 This is a guest post by Jennifer Gavin, senior public affairs specialist in the Library’s Office of Communications.

An engraving of Thaddeus Kosciuszko from the 1820s.

We hear a lot about our “Founding Fathers,” who started a fight with their overlords, then went on to win it. But in that war of rebellion, there were also many brothers (and sisters), cousins and uncles-in-arms—many of them from farther away than the ancestral home of most of our founding crew, England.

One thinks of the Marquis de Lafayette, from France. But there was another founding figure who brought his skills, fervor and bravery to the cause: Thaddeus Kosciuszko of Poland, whom Thomas Jefferson called “as pure a son of liberty as I have ever known.”

This year marks the 200th anniversary of Kosciuszko’s death. In April, the Library of Congress hosted a seminar and one-day exhibition about the life of Kosciuszko, sponsored by the Embassy of the Republic of Poland, the Library and the Congressional Poland Caucus, co-chaired by U.S. Reps. Marcy Kaptur of Ohio and Tim Murphy of Pennsylvania (his mother was of Polish descent).

Kosciuszko, who arrived in the U.S. at age 30 in 1776, was a not-so-well-heeled noble from a part of Poland that has also been part of Belarus and Lithuania, through history. He trained for military service and graduated from his nation’s military academy, but left for France after his brother supported an uprising against the Polish king. There, he studied art, architecture and military topics and was exposed to the French Enlightenment.

No Fair in Love? OK, Then: War!
Back home, he couldn’t afford a commission into the military and worked tutoring students; he tried to elope with his employer’s daughter, but was stopped. 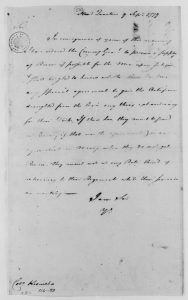 A September 9, 1779, letter from George Washington to Kosciuszko.

His heartbreak would be second only to England’s, within a few years. His appearance in the brand-new United States would add a decisive skillset to the revolutionary victory. Upon his arrival, he was assigned to the Continental Army, where he was a one-man Corps of Engineers.

Col. Kosciuszko is credited with preventing the destruction of Maj. Gen. Philip Schuyler’s army as it fled the Siege of Fort Ticonderoga, buying crucial time by deploying defenses on the fly (blocking roads, wrecking bridges, stone-damming rivers to bog up adjacent lands). He later placed fortifications near Saratoga that allowed the Americans to defeat the British there in 1777, and he also conceived the famous fortifications around West Point.

Kosciuszko in 1780 was sent south to join the armies there, where his floating troop vehicles saved the day in the “Race to the Dan” River; he was wounded by a bayonet in the Second Battle of Camden. And he helped stage some of the nation’s earliest fireworks celebrations, when the war was won. His brilliance and bravery ultimately won him the rank of brigadier general.

His later life saw a return to Russian-occupied Poland, where he helped lead an unsuccessful uprising and was imprisoned and later released; and his return to the U.S., where he lived in Philadelphia (his house is now a National Park Service site) and became close friends with Thomas Jefferson and a proto-abolitionist. But eventually—concerned about his family and the U.S. Alien and Sedition Acts—he returned to Europe, where he ultimately settled in Switzerland. He died there in 1817; his body was later moved home to Poland, to the castle cathedral gravesite of its national heroes.

A Will, But No Way
Kosciuszko, before leaving the U.S., in 1798 wrote a will that is famous among African-Americans but less well-known to most other Americans. In it, he asked Thomas Jefferson to be his executor and, upon Kosciuszko’s death, to use Kosciuszko’s U.S. assets to buy numerous slaves out of their servitude, provide for their education and purchase land for them to farm. Ultimately, these wishes were not carried out, although at least some of the assets eventually funded a school for African-Americans in New Jersey. Jefferson, citing his age (77) when Kosciuszko died, asked an abolitionist friend to be the executor, but the friend declined; three other wills later written by Kosciuszko also clouded the issue. The will ultimately was resolved in 1856 after three trips to the U.S. Supreme Court. 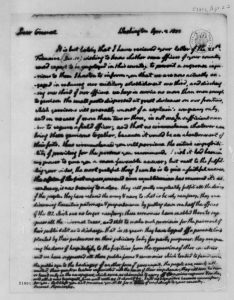 An April 2, 1802, letter from Thomas Jefferson to Kosciuszko.