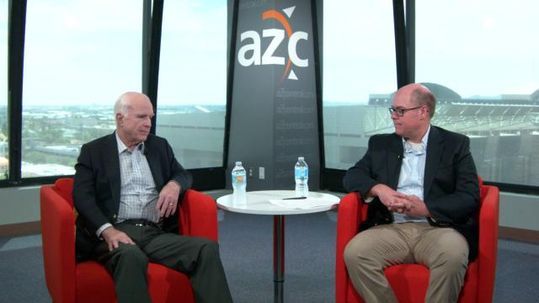 Donald Trump’s supporters think this “Russia thing” is about their president.

It’s about their country.

It’s about preserving the integrity of our election system after a hostile foreign nation tried to exert influence in the United States.

Sen. John McCain is widely recognized for his knowledge of foreign affairs and his no-nonsense approach to protecting our national security.

When asked to name the biggest threat this country faces today, Arizona’s senior senator did not hesitate to say “Russia.”

Russia has power that ISIS doesn’t

During his visit to The Arizona Republic editorial board Thursday, McCain offered an analysis of the situation that reflects the dangers of the modern world.

Terrorist groups, like ISIS, pose an ongoing threat, and they will continue to launch attacks, he said. But they do not have the military capability, technology and ambition to back up their intent to rule the world.

Russia does. And Russia is not a friend to the free world.

Russia has established a presence in the Middle East and continues to exert pressure on eastern European countries, McCain says.