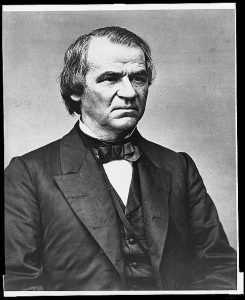 The presidencies of Andrew Johnson, Chester Alan Arthur, and William McKinley all began or ended with the trauma of a presidential assassination. The papers of each president, however, offer different types and levels of documentation as to how each man faced the challenges of his respective administration, and the style in which each chose to govern. Researchers can now explore these collections for themselves, as the papers of presidents Andrew Johnson, Chester Alan Arthur and William McKinley are available online through the Library of Congress.

Vice President Andrew Johnson (1808-1875) of Tennessee succeeded to the presidency following the assassination of Abraham Lincoln in April 1865. With the end of the Civil War in sight, Lincoln’s death on April 15 plunged the country into further turmoil. The task of guiding the nation through the uncharted waters of Reconstruction fell to Johnson. Long affiliated with the Democratic Party, Johnson had been added to a unionist presidential ticket with Lincoln, a Republican. But the ideological and political differences between Johnson and members of the Republican Party quickly came to the fore as they debated the conditions under which the former Confederate states and former Confederates themselves could rejoin the union, as well as the rights and protections accorded to African Americans after emancipation. The thorny issues of Reconstruction dominated Johnson’s administration. 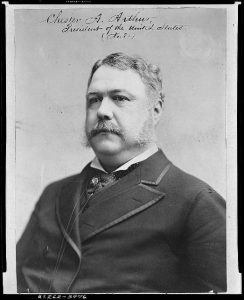 His disputes with Congress ultimately led to Johnson’s impeachment in 1868. Johnson’s perspectives on and activities during Reconstruction are particularly well represented in his papers, especially in the series containing correspondence, messages, executive documents, and amnesty records. Although the bulk of the collection dates from 1865 to 1869, Johnson’s papers also document his political career in Tennessee, his service as the state’s military governor (1862-1865) and his business affairs, including his tailor shop. The online presentation includes a brief timeline of Johnson’s life, related resources for further exploration, a slide show of featured content, and a history of the collection.

Chester Alan Arthur (1829-1886) also had become vice president as part of a presidential ticket that combined divergent views of government, as Arthur and President James A. Garfield represented opposite wings within the Republican Party in the election of 1880. Their differences on political patronage, however, prompted the mentally-disturbed office seeker Charles J. Guiteau to assassinate Garfield to install the more patronage-friendly Arthur as president. Garfield lingered for 80 days before dying on Sept. 19, 1881, which allowed Arthur time to contemplate his response to the presidential responsibilities he never sought.

While most Americans presumed he would follow the path of political cronyism he displayed as collector of the New York Customs House, he surprised his detractors by serving out his term with admirable competence. Although Arthur ordered that most of his personal papers be burned shortly before his death in 1886, the Chester Alan Arthur Papers offer correspondence, financial papers, scrapbooks, papers relating to the 1880 presidential election, Arthur’s presidency, his service as collector of customs for the Port of New York and his work with the New York Republican State Committee. Also of note is a series of 23 letters written to Arthur between 1881 and 1883 by Julia Sand, a reclusive New York woman with an intense interest in politics who appointed herself as Arthur’s conscience. She offered him advice, criticism and praise. Arthur once visited Sand’s home, suggesting that not only did he read her letters, but that he also valued her opinion

The online presentation includes a timeline of Arthur’s life, bibliographic resources, collection highlights, and a history of the collection. 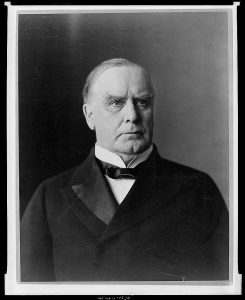 Unlike Andrew Johnson and Chester Arthur, William McKinley (1843-1901) gained the presidential chair through election in his own right in 1896. Although McKinley’s political career included service in the U.S. House of Representatives and as governor of Ohio, his papers at the Library date primarily from his time as president. They are especially strong on the presidential elections of 1896 and 1900, the gold standard, tariffs, progressivism, the Spanish-American War (1898), the Philippine-American War (1899-1902), and territorial expansion. Since McKinley preferred to communicate in person, rather than in writing, much of the correspondence in the collection consists of letters he received, and are reflective of conversations he had and issues brought to his attention by associates and the public. Letterpress copybooks capture communications sent on McKinley’s behalf by secretaries John Addison Porter and George B. Cortelyou. But McKinley’s own voice can be found in his speeches and messages, while scrapbooks and other papers preserve a record of his administration. Despite warnings from friends who worried for his safety in unsettled times internationally, McKinley was shot on September 6, 1901, by anarchist Leon Czolgosz at the Pan-American Exposition in Buffalo, New York. McKinley’s papers include documentation of the days until his death on September 14, when Theodore Roosevelt became the 26th president The online presentation of the McKinley Papers also offers a timeline of McKinley’s life, resources for further exploration, featured items from the collection, and a history of the McKinley Papers.