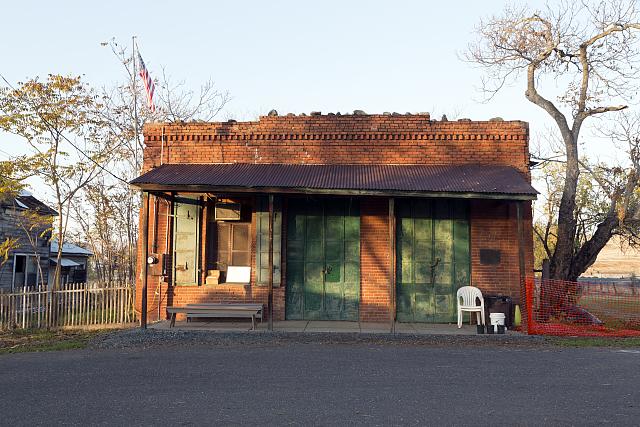 Carol M. Highsmith has recorded the American scene for more than 35 years and donated tens of thousands of photographs, copyright free, to the Library of Congress, available through the Prints and Photographs Division. She has spoken of feeling a sense of urgency to capture aspects of American life that may soon disappear. I suspect she would place in this category her 2012 photographs of early Chinese American settlements that are almost ghost towns today.

Chinese Camp in California was one of the largest and most important of these early settlements. Three dozen or so Chinese immigrants from Canton—now known as Guangzhou—arrived there in 1849 to mine gold during the California Gold Rush. The town became known officially as Chinese Camp in 1854, when it got its own post office.

At its peak, 5,000 Chinese immigrants lived in the town, attracted by dreams of riches but also by the safety and comfort of living with others from their home country. Chinese immigrants faced harsh discrimination in the United States, sometimes even physical brutality and worse, culminating in the Chinese Exclusion Act of 1882, the first major U.S. law restricting immigration.

The residents of Chinese Camp did not entirely escape violence, however. The town is also known for an 1856 battle between two rival Chinese factions—or tongs—vying for control. Four men died, and several others were wounded.

After the Gold Rush, the population of Chinese Camp dwindled, and the final settlers left in the 1920s. As of the 2010 U.S. census, only 126 people lived in the town.

“Today one can walk the streets of the old town,” wrote Daniel Metraux in the Southeast Review of Asian Studies. “But most of the buildings standing in the blazing sun are empty save for the ghosts of the original miners who gave life to the town.” 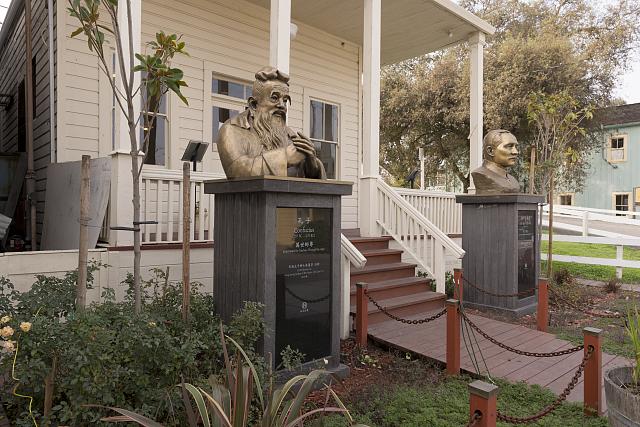 Chinese immigrants built the town of Locke, California, in 1915 after a fire destroyed a nearby Chinese community. California’s Alien Land Law of 1913 prohibited noncitizens from owning land. So the immigrants secured a lease from George Locke under which they could own any buildings they constructed but not the land itself, which remained in Locke’s possession.

Located near the Sacramento River, Locke served the area’s agricultural workforce, mainly Chinese laborers in the asparagus fields. In addition to homes, it had a small Chinese school, restaurants, a post office, hotels and rooming houses, a theater, grocery stores, a hardware and herb store, a fish market, two dry goods stores, a dentist’s office, a shoe repair, a bakery and a community vegetable garden. Early on, it was also known for its bars, gambling houses and opium dens, which drew hundreds of visitors on weekends.

Locke was designated a National Historic Landmark in 1990, and many of the original buildings have been preserved. Today, however, the town has fewer than 100 residents.

More than a century before Carol Highsmith documented Chinese Camp and Locke, photographer Arnold Genthe shot some of the best-known photos of San Francisco’s Chinatown before the earthquake and fires of 1906. 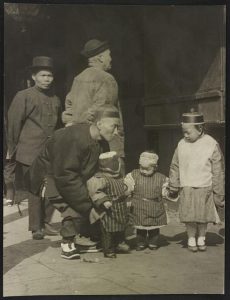 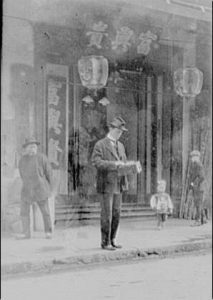 Arnold Genthe with his camera in San Francisco’s Chinatown.

He reported waiting patiently on street corners for hours to capture just the right images to document daily life. Yet Genthe is known to have edited his photographs in the darkroom, sometimes removing signs in English and cropping out westerners like himself. It is not known exactly why he did this—perhaps to make his pictures seem more authentic. But according to modern scholars, he achieved the opposite result: his photographs are now seen by many to convey an exoticized perspective on Chinatown.

Genthe moved to New York City in 1911, where he focused mostly on portraiture, photographing famous figures such as President Woodrow Wilson, actress Greta Garbo, dancer Isadora Duncan and others. The Library acquired 20,000 of Genthe’s photographs after he died in 1942. About 16,000 are available online, including hundreds of San Francisco’s Chinatown.