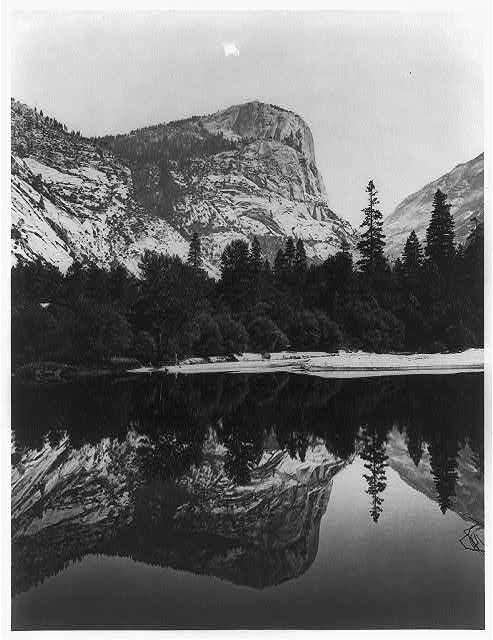 This post is based on an article from the November–December 2016 issue of LCM, the Library of Congress Magazine.

Carleton Watkins captured this view of Yosemite’s Mirror Lake while most of the country was engaged in the Civil War.

National parks are among the nation’s most cherished natural resources. The National Park Service, a bureau of the U.S. Department of Interior, was created by an act of Congress. On August 25, 1916—101 years ago today—President Woodrow Wilson signed the act into law.

A century after its founding, the National Park Service overseas more than 400 sites, in every U.S. state and territory. These include parks, monuments, battlefields, scenic rivers and trails and historic sites—many of which are represented in the Library’s photograph collections.

One of these sites is California’s Yosemite National Park. Carleton Watkins captured the pristine scene at Yosemite’s Mirror Lake shown here during the 1860s. One of the best landscape photographers of the 19th century, Watkins used the cumbersome, demanding technology of his era—requiring large glass wet-plate negatives—to produce some of the most stunning images of this extraordinary wilderness. His images are credited with encouraging Congress to pass legislation in 1864 that required California to protect the area from development. President Abraham Lincoln, who signed the bill, was reported to have been very taken with the beauty of the images.

Subsequent efforts by landscape designer Frederick Law Olmsted and naturalist John Muir resulted in Yosemite becoming a national park in 1890—decades before the establishment of the National Park Service.

The Library’s website contains thousands of images of the national parks, including more than 100 views of the Yosemite area by Watkins.