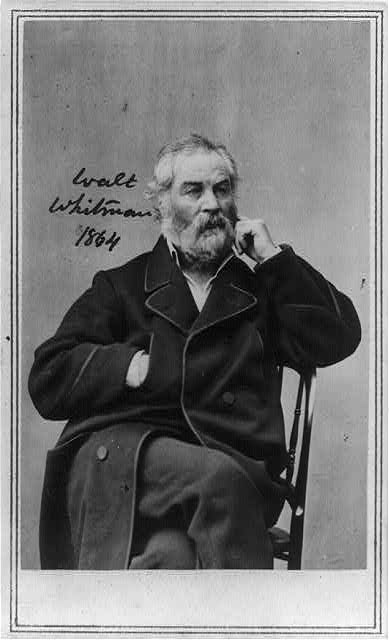 Walter Whitman (no middle name, thanks) was born on this day in West Hills, on Long Island in New York. Somewhere out there in the cosmos he loved, the man’s spirit is now 200. The Library has the world’s largest collection of his books, manuscripts, prints, photographs and related material. You can spend ages exploring it all, but here’s the short version:

His parents were of Dutch (mom, Louisa Van Velsor) and English (dad, Walter Sr.) ancestry. The family wealth, once respectable, was dwindling as the years passed; the family lived in a log cabin with a wooden fence around at the time of his birth. He was the second of eight children and his parents moved the family to Brooklyn when he was three. They were so poor that Walt had to leave school to work when he was 11, but his parents were nonetheless filled with a love of the nation. Proof: They named other sons George Washington Whitman, Thomas Jefferson Whitman and Andrew Jackson Whitman.

Walt went into the newspaper business, bless his heart, and was editor of the Brooklyn Eagle, a respectable outfit, at the age of 26. He liked to travel, write and observe the often brutal world around him. The beauty in it dazzled him. He wrote a book of poems called “Leaves of Grass” when he was 34. You may have heard about this.

Fame followed, though not necessarily fortune. He always had a job – journalist, editor, government clerk — never married and seems to have lived a happy life with a series of male companions (likely romances) and created, through his poetry tied to the national sensibility, the mythology of the American ideal.

Today, we wish him one big barbaric yawp of birthday happiness. You can send along your wishes, perhaps, by transcribing some of his writings.