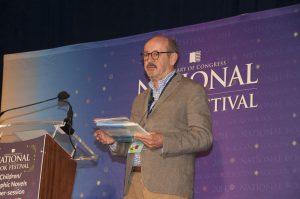 Anne Holmes of the Library’s Poetry and Literature Center wrote this post, which first appeared on “From the Catbird Seat,” the center’s blog. Tracy K. Smith, the 22nd Poet Laureate Consultant in Poetry at the Library, will give her inaugural reading in the Library’s Coolidge Auditorium this evening, marking the beginning of her laureateship. Like her predecessors, Smith will identify projects to carry out during her tenure. “Poetry 180” came into being as a laureate project of Billy Collins, who served from 2001 to 2003. He initially selected 180 contemporary poems, one for each day of the school year, with high school students in mind. Collins envisioned the poems being read aloud to all members of a school community. The poems are accessible on the Library’s website; poetry lovers can also subscribe to receive a daily poem by email or RSS feed. Here Holmes writes about an update to Poetry 180 and conveys a message from Collins.

This month, as thousands upon thousands of high schools around the country bittersweetly sounded their morning bells for the first time this school year, we at the Poetry and Literature Center sounded our bells as well. Why, you ask? Because the start of the school year also brings with it the start of Poetry 180, and this year is particularly exciting—we’ve added 10 new poems to the mix.

I would like to extend a personal welcome to everyone who is visiting the newly updated Poetry 180 website. The website, as many of you know, was my pet project when I was poet laureate. I decided that poetry was most endangered in high school for reasons too numerous to go into here. My idea was to collect 180 poems, which could be read aloud to the assembled high school, one for every day of the school year. Going forth with no idea of what kind of response the site would attract, I was surprised and gratified to see the sizable number of schools, even some in English-speaking countries far from the United States, who began participating in the program. I was even more gratified to hear from scores of high school teachers in person, most of whom approached me after a reading, who reported not only that they used the poems on the website (and the print volumes that followed), but that the program worked! The most poetry-phobic students found themselves intrigued and even charmed by a poem, and that was enough to break through to students, to show them that poetry can be a pleasure as well as an academic subject.

With the help of the staff of the Poetry and Literature Center at the Library of Congress, I have periodically updated the poems on the website—“freshened the jukebox,” as we began to say. And for the beginning of this school year, the website features many new poems. So dig in anywhere and be prepared to find 180 poems that are readable, engaging and entertaining for you and your students.

If you’re familiar with Poetry 180, you might just recognize the newly added poems on your own. For those seeking a cheat sheet, though, here’s what the first half of the school year has in store:

Whether you’re reading them out loud in a classroom or in your living room, we hope these poems stir up new ideas, questions and the hunger for more.

If you haven’t already, make sure to subscribe to our daily Poetry 180 e-mail blast or RSS feed. And stay tuned—Billy Collins will be refreshing the Poetry 180 jukebox for the second half of the school year, too.

How has Poetry 180 made an impact on you or your students? Share your stories in the comments.