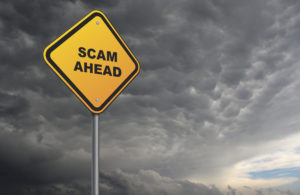 After devastating parts of Texas were hit with record rainfall in what the National Weather Service described as “beyond anything experienced,” expect a flood of Hurricane Harvey-themed fraud to continue…even after the waters recede.

That’s because of what’s already been experienced after virtually every other major natural disaster: Scams that prey on those whose lives and homes have already been destroyed, as well as good-hearted strangers hoping to help from thousands of miles away. Here’s a timeline of what to expect in the wake of Harvey, as well as future disasters:

Charity scams are typically the first gotcha out of the gate. (Even before Superstorm Sandy made landfall, more than 1,000 new websites with “Sandy,” “relief” or related keyword search terms were registered, many by scammers). Some charity scams come by unsolicited phone calls or front-door visits, but more begin with randomly blasted text messages, emails and social media posts to direct would-be donors. There, personal information and credit card numbers are collected for supposed donations (and possible identity theft); some scammer sites also infect your computer with information-stealing malware.

For fraud-free fundraising, you should contact the charity directly. Don’t trust requests that come to you. Stick with names and reputations vetted at Charity Navigator, Charity Watch, and Give.org, and follow these tips to avoid post-disaster charity scams. To immediately help Harvey victims, call the Red Cross at 1-800-RED CROSS, visit redcross.org or text the word HARVEY to 90999. For Salvation Army donations, call 1-800-SAL-ARMY, visit http://helpsalvationarmy.org or text STORM to 51555.

Rip-off repairmen known as “storm chasers” will flock to Texas as soon as the rain stops to begin their kind of soaking. These out-of-town tradesmen present themselves as roofers, carpenters, electricians and other tradesmen, and promise a quick repair for an upfront payment. Some just take the money and run; others may do “quick” but shoddy or incomplete work that may not be covered by homeowners insurance.

Because qualified and reputable tradesmen will also come to Texas for work, ensure both your wallet and home are protected by first asking your insurer to survey the damage and recommend approved contractors. Locals may be hard to find, so search and verify names through state licensing agencies, and provide your insurer with proof of contractor licenses, workers compensation insurance, written estimates and scope of work in detail, before hiring and paying anyone. It’s also wise to get a copy of the contractor’s driver’s license or other photo ID.

Imposter scams. Charity scammers aren’t alone in playing a rip-off role. As in past natural disasters, Harvey hoaxsters may pose as employees of the Federal Emergency Management Agency (FEMA) or insurance companies. Under the guise of doing an inspection and offering restitution or low-interest loans to rebuild, they angle for personal and financial information like Social Security and bank account numbers to use for identity theft. Others seek entry to homes to case for later burglary. Beware of demands for upfront payment, allegedly to process claims or pay your insurance deductible. Ask for identification, verify credentials, and keep in mind that FEMA doesn’t charge for any service.

Flood cars. In the coming weeks, the thousands of vehicles submerged in Harvey’s floodwaters will be offered for sale, possibly thousands of miles from Texas. That’s because when vehicles damaged by floods are deemed a total loss by insurers, owners are paid off and these so-called flood cars are hauled to a salvage yard, where they are supposed to be sold for parts. But roughly half wind up being purchased, cleaned up and resold to dealers and individual buyers. Although initially drivable, problems quickly occur: Rust attacks the engine and body. Wires that were water-soaked dry up and crack. Brakes, door locks, power windows, transmission and heating and air conditioning units fail. Some may even explode while being driven.

To avoid buying a flood car, enter its vehicle identification number (VIN) at VINCheck, a free service from the National Insurance Crime Bureau that could reveal a vehicle’s flood damage and previously Texas occupancy; Carfax and AutoCheck are also good sources. Also do your own sleuthing: Musty smells indicate mildew that couldn’t be cleaned while overpowering fragrances suggest the seller may be hiding something. Be suspicious of carpeting that looks too new, is discolored or has water stains. Check engine crevices and exposed screw heads, the glove compartment, door panels, under seats and the spare tire well for water lines or signs of mud, silt or rust. Beware of water condensation, fogging or water lines inside headlights, taillights and dashboard gauges. Repeatedly test electrical equipment – wipers, turn signals, heater and air conditioner, power windows and locks – and check engine wires; if they don’t bend easily, they may soon crack because of water damage.

Prepare for next time. Along with death and taxes, there’s a third certainty: Mother Nature will again go wild, possibly in your town. Whether it’s a future hurricane (yes, I’ve been there…several times), tornado, wildfire or other disaster, a little foresight and preparation goes a very long way. Before seconds really count, use this guide to prepare that must-have paperwork, often overlooked but crucial items and reduce insurance hassles.