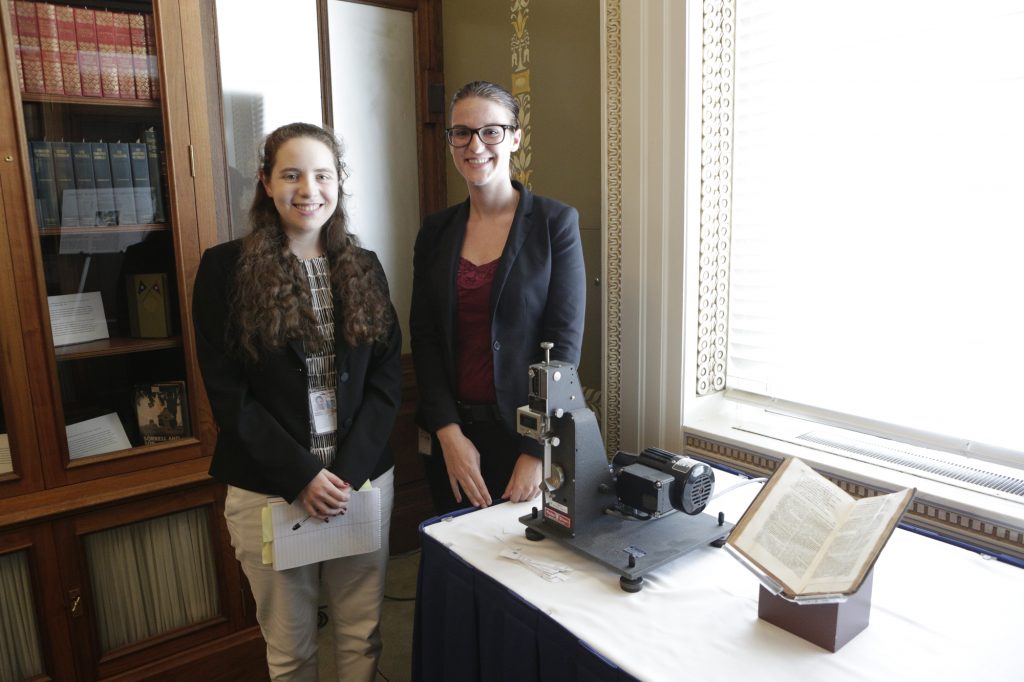 This is a guest post by Rebecca Naimon, an intern with the Library’s National and International Outreach Unit. She is a senior at the University of Chicago, majoring in English and minoring in statistics. Naimon supported the Library’s Junior Fellows Program this summer and is working on the 2017 National Book Festival.

Rebecca Naimon (left), author of this post, and Riley Thomas, a 2017 Junior Fellows intern, beside the kind of device paper conservator William Barrow used in the 1950s and 1960s to test paper quality. Photo by Shawn Miller.

Riley Thomas spent ten weeks this summer in the Preservation Research and Testing Division as an intern with the Junior Fellows Program, performing molecular analysis on paper samples. When I found out about her project, I wanted to know more. So I met Riley for coffee one morning and interviewed her. She’s entering her senior year at the University of Delaware this fall as an art conservation and anthropology double major.

What was your Junior Fellows project?

I worked with the Barrow Book Collection, which was owned by William J. Barrow, a paper conservator and chemist in the 1950s and 1960s. He had around a thousand books from the 15th to the 19th centuries; after his death, they were donated to the Library.

You can really see the changes over the 400 years they span in the paper the books used, like parchment versus wood pulp, and the structure of the bindings. Some books from the 1500s and 1600s have really beautiful marble-decorated papers on the inside or really pretty illuminated letters.

Barrow used the books for testing, relying on a machine to fold pages back and forth at a 270-degree angle until they broke, counting how many times it took. He found that high acidity (a lower pH) was one of the biggest indicators of risk for degradation. He and his laboratory released reports saying that many papers from the 1800s and the first half of the 1900s were at risk for becoming unusable in libraries and other institutions. 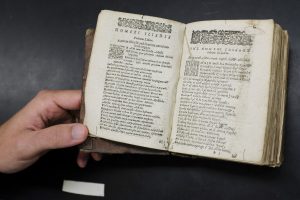 Thomas was especially fascinated by this pocket-sized edition of “The Iliad” from the Barrow Collection. Photo by Shawn Miller.

Now, we’re revisiting what Barrow did to see if his conclusions hold up with our more modern technology. We’ve been doing something called size-exclusion chromatography to examine the average molecular weight of the paper’s cellulose. If a paper has a lower average molecular weight, then it’s more degraded, so not as strong. We’re trying to see if there’s correlation between physical and chemical properties—strength and acidity—and the molecular structure of the cellulose of the same paper.

The work I did this summer supports the hypothesis that size-exclusion chromatography can be used instead of more destructive means to measure paper degradation. Additionally, my research showed that the Barrow Collection has deteriorated since the 1960s but that the amount of deterioration is not uniform between samples. The preservation lab now has a future research project on why there is such variation in the levels of deterioration.

I ran about six paper samples a day, which were each five micro-punches of paper, one millimeter in diameter. I had to dissolve the paper to extract the cellulose from it, which could take anywhere from one to seven days. I had it on rotation, so I had something ready every day.

Once a sample dissolved, I diluted it and filtered it into little vials. I programmed the autosampler and let it run. In the meantime, I either took more samples or remeasured the pH of the books that Barrow reported as having the highest and the lowest pH. That unfortunately required full sheets of paper instead of micro-punches. But the books have kind of donated their bodies to science, so they are here for the purposes of research and testing.

Did you find anything exciting?

There is one book that I absolutely love that I found. It’s really tiny, maybe three inches by four inches, like a pocket-sized book. But it’s over 900 pages long because it’s “The Iliad.” On one side of the page, it’s in Latin; on the other side, it’s in Greek.

I learned about the field in my junior year of high school when I was trying to figure out what I wanted to do with my life. I’ve always loved art. I’m interested in anthropology, and I like history and science, too. Art conservation is super interdisciplinary. In my classes, we say it’s the three-legged stool of fine arts, chemistry, and art history/anthropology. I absolutely love it, and the program at the University of Delaware is great. We have to take four semesters of chemistry as part of the art conservation major, so that’s how I got interested in the chemistry aspect.

How was your experience as a Junior Fellow?

What I loved was that I had a supervisor, and we worked together on the goals of the project. But if there was something that I was interested in, he let me take the lead. I had a lot of independence in my day-to-day work.

Then, at the end of the program, we displayed our work for Library staff and the public. But we also had a presentation for our entire division. All the interns presented, and we had to write reports. I think both of those things are really important in the conservation field: being able to talk about your work and reporting on what you’ve done. Those experiences were really valuable to me.