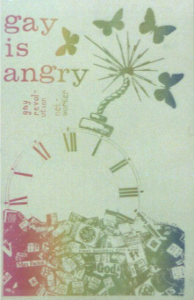 A short 1970 documentary by Lilli Vincenz about the Christopher Street Liberation Day Parade.

This is a guest post by Megan Metcalf, Women’s, Gender and LGBTQ+ Studies librarian and chair of LC-GLOBE, the official Library organization for LGBTQ+ employees and allies.

This month marks the 50th anniversary of annual LGBTQ+ Pride traditions in the United States. The first Pride march was in New York on June 28, 1970, on the first anniversary of the Stonewall Uprising, the protests that occurred after a late-night police raid on the landmark gay bar on Christopher Street in Greenwich Village.

The Library collections demonstrate how this first Pride march – originally billed as Christopher Street Liberation Day — was planned and the reasons why activists felt so strongly that it should exist. Looking through the Library’s collections of pioneering gay rights activists Lilli Vincenz and Frank Kameny, researchers can find planning documents, correspondence, fliers and more. The march was meant to give the community a chance to “…commemorate the Christopher Street Uprisings of last summer in which thousands of homosexuals went to the streets to demonstrate against centuries of abuse…from government hostility to employment and housing discrimination, Mafia control of Gay bars, and anti-Homosexual laws,” according to promotional fliers.

So who came up with the actual idea to hold this first Pride march?

The concept came from the Eastern Regional Conference of Homophile Organizations (ERCHO), which had been holding an annual July 4th demonstration known as the “Reminder Day Pickets,” at Independence Hall in Philadelphia from 1965 to 1969.

But after the Stonewall Uprising, ERCHO member organizations voted to organize a national annual demonstration. In the Homophile Action League Newsletter of January-February 1970, they adopted the following resolution:

“That the Annual Reminder, in order to be more relevant, reach a greater number of people, and encompass the ideas and ideals of the larger struggle in which we are engaged — that of our fundamental human rights — be moved both in time and location.

“We also propose that we contact Homophile organizations throughout the country and suggest that they hold parallel demonstrations on that day. We propose a nationwide show of support.”

As prominent members of the Mattachine Society of Washington, one of the earliest gay rights organizations, Vincenz and Kameny helped plan and promote this first Pride march along with activists in New York and other ERCHO groups.

When the march kicked off on Christopher Street around 2 p.m. on June 28, there were more than 5,000 marchers and an equal number of bystanders cheering them on. They filled the street, marching more than 50 blocks to Central Park. Dozens of organizations took part, including the Queens Liberation Front. This was a group that formed partially in response to attempts by some organizers to make drag queens march at the end of the parade.

This was a thorny issue. Since it was illegal to “crossdress” in New York in 1970, Pride organizers worried that police might target trans- and gender non-conforming marchers. Their fears turned out to be unfounded as not a single arrest was made. Many of the drag queens successfully “marched the entire three-mile parade route in heels,” Drag Magazine wrote in 1971. Smaller inaugural Pride events were held in Los Angeles and Chicago.

Due to the dedication of a countless number of activists and organizers, Pride is now celebrated nationwide and around the world. Last year, on the 50th anniversary of the Stonewall Uprising, more than 150,000 people marched in WorldPride in New York, with hundreds of thousands more lining the route. (NYC Pride is cancelled this year due to the COVID-19 pandemic.)

But for half a century now, LGBTQ+ people have continued to gather in June to march with Pride and demonstrate for equal rights. We invite you to learn more about LGBTQ+ history and culture by exploring the diverse collections at the Library.