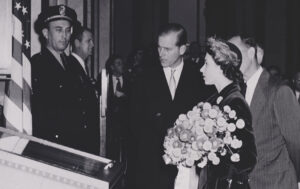 Prince Philip, the Duke of Edinburgh and husband of Queen Elizabeth II of the United Kingdom, died on Friday at Windsor Castle in England.

Prior to her ascension to the throne, then-Princess Elizabeth and the Duke visited America and made a stop at the Library. Here’s an account of their visit from our Library of Congress Information Bulletin, v.10 n.45, November 5, 1951:

Their Royal Highnesses, Princess Elizabeth and the Duke of Edinburgh, expressed great pleasure that [the Library of Congress] was included in their tour on Friday, and the Princess was deeply impressed with the fact that so many staff members turned out to greet them. Mr. Clapp conducted the 20-minute tour of [the Library], which included viewing the Main Reading Room from the Gallery and exhibits on the second floor.

Besides viewing the Main Reading Room and the Shrine documents, the visitors saw the memorabilia of the Presidents, the “Milestones of American Achievement” and other regular LC exhibits, and a special display arranged in their honor, which included: A letter of condolence on the death of President Lincoln from Queen Victoria to Mrs. Lincoln; a letter from Thomas Jefferson to James Monroe calling attention to the importance of friendship with Great Britain; a letter in King George V’s handwriting to President Wilson expressing “deep satisfaction” that the two English-speaking nations were working together; and a sketch of the Battle of Trafalgar between Lord Nelson and the combined fleets of France and Spain, with a letter describing the action.

Both the Princess and the Duke expressed keen interest in the exhibits. They had learned the Gettysburg Address and were pleased to see the original; the Princess was particularly interested in Queen Victoria’s letter, asking how LC happened to have it; the Duke studied the sketch of the Battle of Trafalgar; and both of them asked questions about the Shrine documents and the new preservation processes. It is reported that they were still talking about the LC visit and the fact that so many people were there to see them when they went up into the Capitol after seeing the Supreme Court Building.

Our collections include several more images of Prince Philip and Queen Elizabeth — including a wedding portrait and a Herblock cartoon.

Thanks to Library of Congress archivist Cheryl Fox for finding this account.