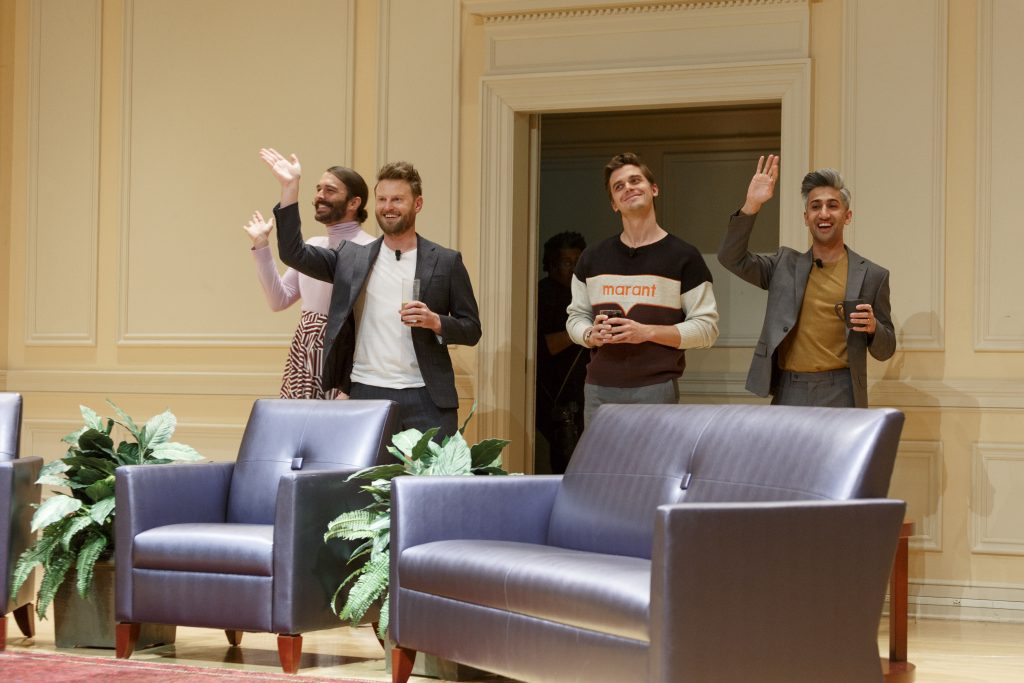 The cast of “Queer Eye” greets the crowd at the Coolidge Auditorium for a conversation about LGBTQ+ youth issues. April 3, 2019. Photo by Shawn Miller.

First, there was the show-delaying traffic jam. Then, there was the GenOUT acapella choir, with gorgeous vocals. And finally, there was the boisterous entrance to a packed Coolidge Auditorium. The cast of the Netflix hit reality series, “Queer Eye,” had arrived — and instantly had an adoring crowd in the palm of their hand.

The show’s cast delighted the audience with plenty of their trademark quips and tips (“moisturize daily;” “walk away from the hair color aisle”), but also settled in for a discussion of LGBTQ+ rights and empowerment in a society that isn’t always accepting. When a 12-year-old audience member submitted a query asking how kids could be more confident in school, the cast took it to heart.

“The most sure thing that you will ever have is your relationship with yourself,” said Jonathan Van Ness, the show’s grooming expert. “As you proceed in your education and your life, the more you can love and accept yourself, the more other people’s opinions and the goings-on of the world won’t rock your opinion of yourself so much. And then, honey, you’re confident.” 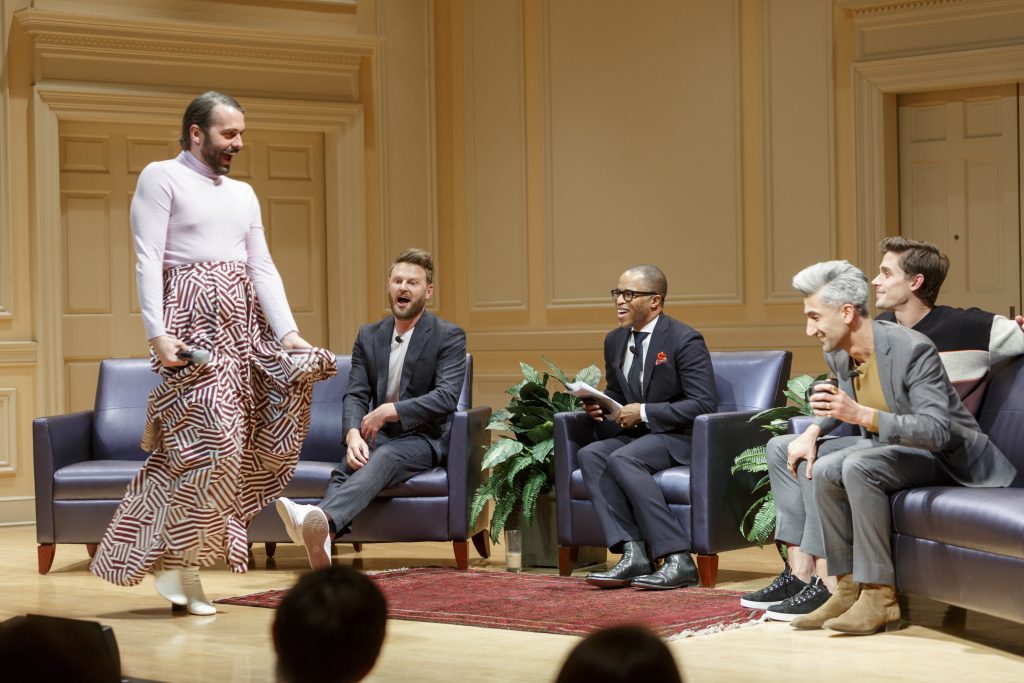 The hour-long conversation, hosted by Jonathan Capehart, the Pulitzer Prize-winning Washington Post columnist and MSNBC commentator, was billed as “Fab Five Serve Self-Love to LGBTQ+ Youth.” Four of the show’s five stars were on hand: Van Ness, Antoni Porowski, Tan France and Bobby Berk. It was an evening of giddy laughs, thoughts on confronting prejudice, advice on lifestyle choices and no small amount of the banter that’s made the show a pop culture favorite since Netflix launched it in 2018.

It’s a reboot of the Bravo series, “Queer Eye for the Straight Guy,” that ran from 2003 to 2007. This version is an upbeat, tears-and-cheers series of makeovers and self-development, with episodes like “You Can’t Fix Ugly,” “Camp Rules” and “To Gay or Not Too Gay.” Each cast member has a different area of expertise for a full lifestyle makeover. Berk, for example, oversees home design, while France sees to fashion. It follows the reality-show template of the cast helping someone who’s in a tough spot with an energizing reimagining of themselves. The first two seasons were shot in Atlanta; this year, the cast moved to Kansas City. 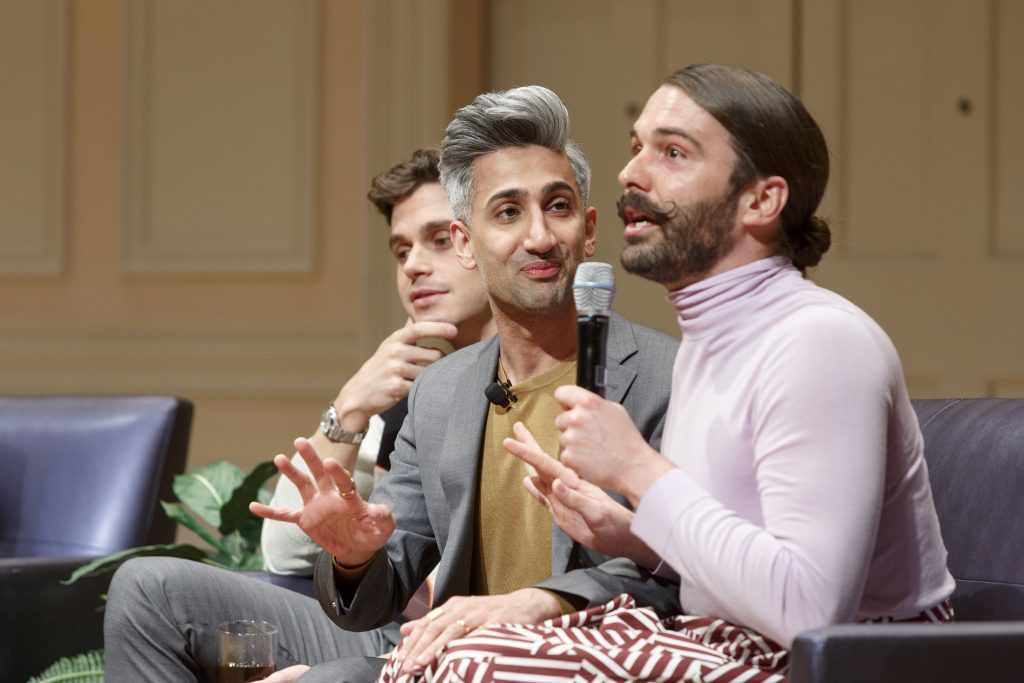 It was striking, how similar the cast was on stage to the spirit of the show. There was the cross-talk, the energy, the emphasis on self-acceptance. France talked about how giving positive affirmations to himself — each morning as he’s brushing his teeth, looking in the mirror — at first felt goofy. Then, he said, it became a productive habit.

“It can really make you feel better,” he said. “I say this a lot, but I don’t want to be the reason I’m unhappy. So I allow myself to compliment myself at the start of the day.” 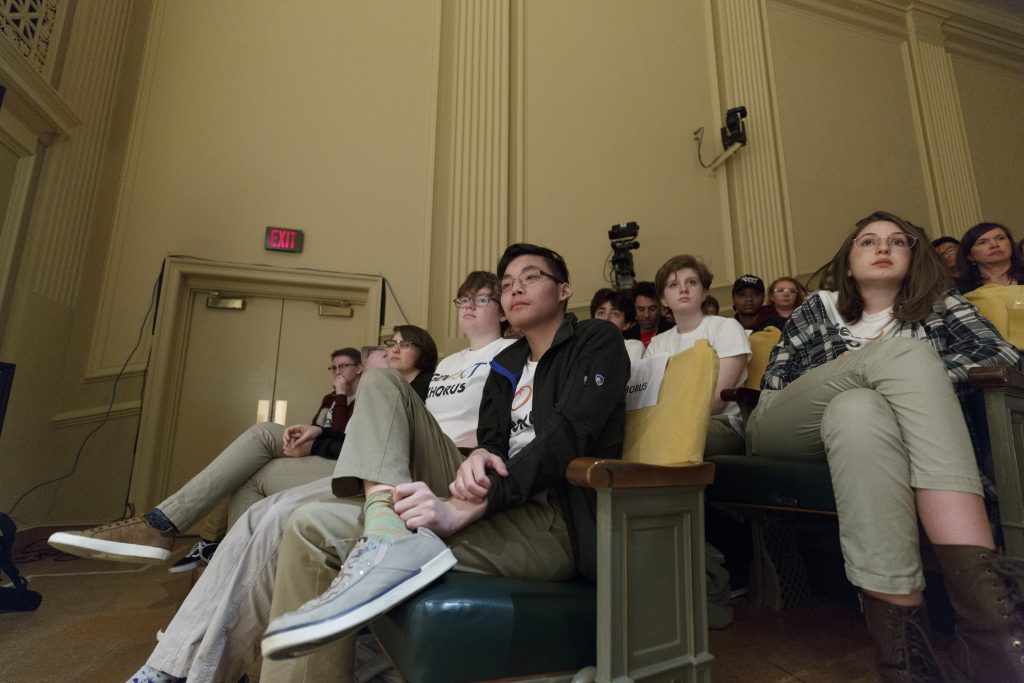 The audience was packed with the show’s fans. Photo by Shawn Miller.

And Porowski provided perhaps the most touching moment. While a teen, he said, he had fallen into a dark bout of depression and wasn’t sure what to do next.

“I needed help and my parents weren’t available for that help, so I went to a teacher,” he said. “I did a lot of things wrong, but one thing that I did right is that I didn’t keep it to myself too long…when you have that conversation in your own head it starts to become a problem. And by actually reaching out to somebody and getting some professional help in the end was the best thing I could have ever done for myself. And it’s something that I continue to do to this day.”

By the time the conversation came to a close, the audience was once again on their feet. At least for one evening, feeling good proved to be contagious. 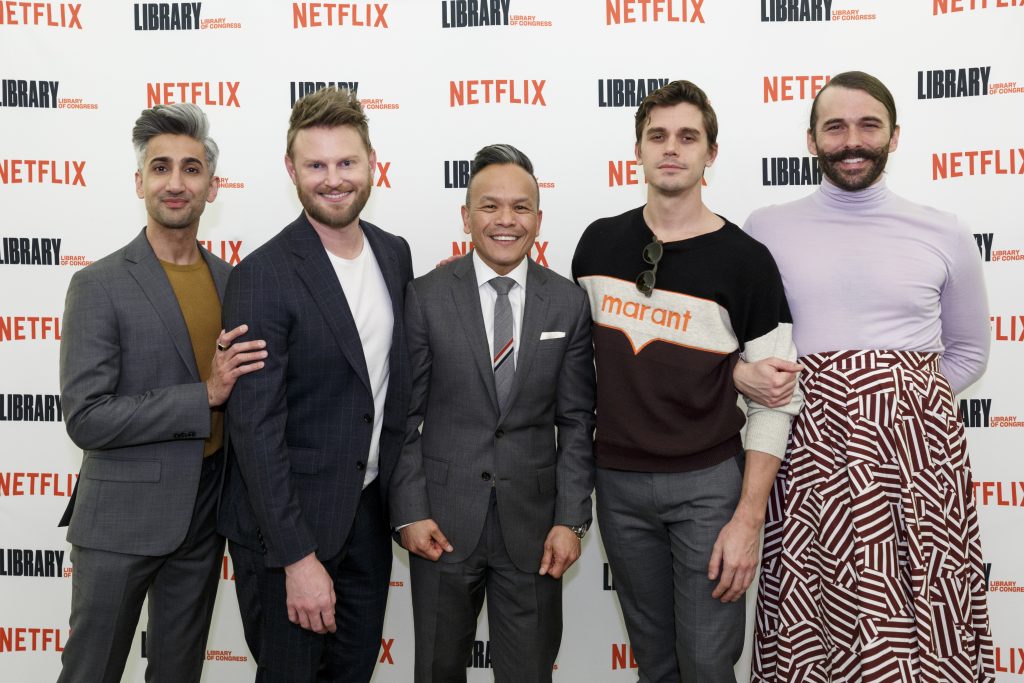 The cast with Roswell Encina, the Library’s chief communications officer, at the reception. Photo by Shawn Miller.