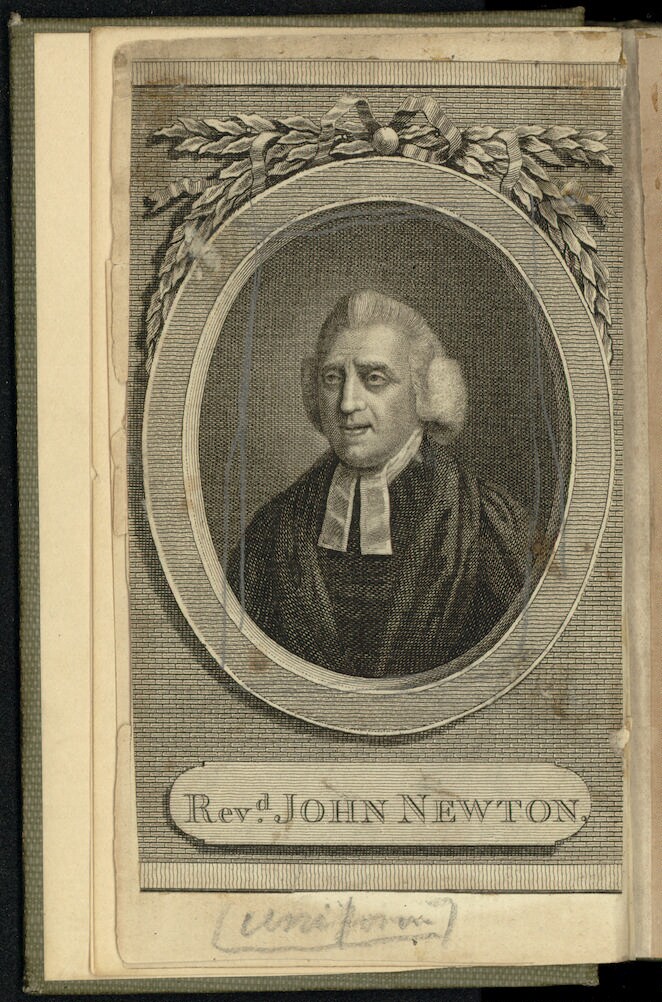 John Newton, composer of “Amazing Grace,” published in “Olney Hymns” in 1779. He started as a sailor for the Atlantic slave trade but later denounced that life and became a much-loved religious figure.

It is always interesting to examine how a particular book came to publication with a look toward the cast of characters involved as well as the influences of place. The rare book I am highlighting this month is “Olney Hymns,” written by an English clergyman by the name of John Newton in 1779 with the aid of his friend William Cowper. Within this title are 348 hymns—280 by Newton (1725–1807) and 68 by Cowper (1731–1800). Each man is quite interesting in his own right, and each is the author of a very well-known and well-loved hymn contained within this work. 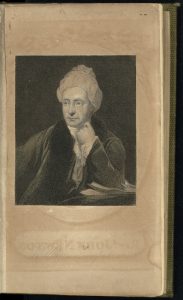 William Cowper, as he appears in “Olney Hymns.”

They became friends after suffering various trials and tribulations, finding each other along the paths of their religious journeys. They forged their friendship in the small town of Olney, England, for which the book is named. This small bucolic English town whose residents were mainly illiterate lace-makers was in many ways the perfect place for Newton to settle as a minister after an arduous, adventurous and less-than-saintly early life. Cowper also enjoyed the quiet and simplicity of the village, where he attempted to calm his troubled mind and practiced his craft of writing, for which he showed great talent. Both had an evangelical worshipping style and wrote hymns that spoke to the emotions. Cowper excelled at writing, while Newton was able to move his parishioners with his directness. They both produced hymns of great accessibility as well as simple beauty, which are made available in this work.

Newton’s greatest contribution to “Olney Hymns” is the perennially popular “Amazing Grace.” The lyrics speak to his great gratitude and awe at being saved from misguided ways. Newton grew up without any particular religious conviction and went to work as a sailor for the Atlantic slave trade. His habits and behavior in this course and arduous occupation were rough; he was known to swear, drink and buck authority more than most, which led to harsh punishments. He suffered through many, all the while witnessing acts of brutality committed against slaves. After surviving a near shipwreck, Newton vowed to denounce his old ways and seek out God. He went on to be a much-loved religious leader of his community and was ordained in the Church of England in 1764. “Amazing Grace” has been researched in detail and is highlighted with its own Library of Congress resource page. 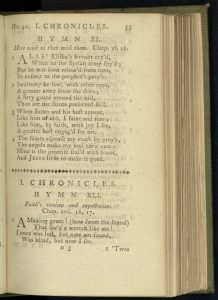 “Amazing Grace” begins on the lower half of this page. Click on the image for a larger view.

The other well-known hymn in this book was written by William Cowper. “Light Shining Out of Darkness” is better known by its first line: “God Moves in a Mysterious Way.” Originally published in 1773, this hymn wonders at God’s miraculous will and hand in all things. One of the most popular poets of his time, Cowper’s writing demonstrates a straightforward, heartfelt celebration of nature and God. He is known as one of England’s great early Romantic poets.

Cowper suffered from poor mental health throughout his life. At the tender age of six, he was deeply affected by the death of his mother. In addition, he was often bullied at school, most likely because his family was less well-to-do than others and also probably because Cowper displayed a sensitive artistic nature, which the other boys likely did not possess. Intellectually gifted, Cowper trained for a career in law, but the pressure of exams proved to be too much. He experienced a mental breakdown and attempted suicide several times. Thereafter, Cowper sought out a career writing prose. 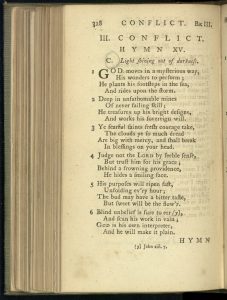 “God Moves in a Mysterious Way” by William Cowper.

According to a handwritten note in the digitized copy of “Olney’s Hymns,” Cowper wrote “God Moves in a Mysterious Way” after another emotionally turbulent time in his life:

The Poet . . . was stricken with madness. [H]e sought a coach; drove to the Thames intending to drown himself, but the coachman passed the spot which had fixed upon and drove him home. Upon his recovery, he wrote the [illeg.] “God moves in a mysterious way.”

As is often the case with intellectually curious and artistic souls, Newton and Cowper inspired the creation of new works by others and made new friends along the way, William Hayley (1745–1820) and William Blake (1757–1827) among them.

Hayley first met Cowper in 1792, and they became good friends, with Hayley helping Cowper through his mental difficulties and even assisting him with collecting his pension. Hayley was a minor poet who also wrote biographies, including, “The Life and Posthumous Writings of William Cowper, Esq.” Hayley was also friends with William Blake and employed him to engrave the illustrations for the Cowper biography. 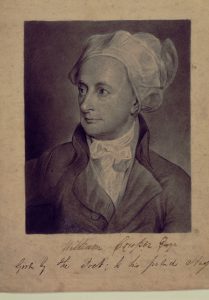 Image of Cowper from an original plate engraved by William Blake.

Digital materials on William Blake in the Lessing J. Rosenwald Collection include several prints. Cowper’s portrait for Hayley’s biography is among them, along with other prints Blake created for a piece entitled “Ballads Founded on Anecdotes of Animals.” Paging through the images reveals Blake’s great skill as an artist. Yet he was not at all happy executing this sort of work.

Blake was a powerhouse of original thought and artistic expression and a seminal figure in the history of poetry and visual arts of the Romantic Age. He embraced a sensuous, earthy concept of self, which was tied to his religious beliefs. He wrote about these beliefs in surreal, prophetic works, illustrated with beautiful, fantastical scenes. The Rosenwald Collection includes some of his finest prints. 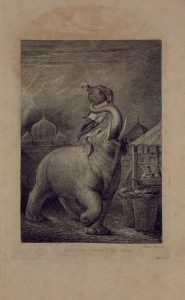 A design by Blake for “Ballads Founded on Anecdotes of Animals.”

Hayley secured Blake’s financial life by taking him in and employing him to illustrate books. Blake felt stifled by the work and came to resent Hayley for it, although he apparently felt somewhat badly for feeling that way. Still, he described Hayley as “an enemy of my Spiritual Life” who only coveted “the meer [sic] drudgery of business.”

It takes all kinds. Although Hayley may not have been as artistically talented as his contemporaries, we should all be thankful that he promoted incredibly gifted artists. Which brings us back to “Olney Hymns” and the sentiments therein: God works in mysterious ways, and it is by an Amazing Grace that man and his works are driven.