This is a guest post by digital library specialist Elizabeth Gettins. It coincides with the posting of additional illustrations from the Library’s 1895 edition of Robert Louis Stevenson’s “A Child’s Garden of Verses” on the Library’s Pinterest site.

This illustration by Charles Robinson and the others below are from the 1895 edition of “A Child’s Garden of Verses.”

Robert Louis Stevenson (1850–94) spent his childhood in the cold and damp of Edinburgh, Scotland, his dedicated nanny by his side, often nursing his frail constitution back to health from frequent illnesses. From a young age, these forced convalescences honed Stevenson’s imagination and gave him the time to perfect his skills as a writer. These early circumstances created Stevenson’s life calling as an artist and author as he went on to become one of the most beloved fiction writers in the Victorian era with his best-known works being “Treasure Island,” “Kidnapped” and “The Strange Case of Dr Jekyll and Mr. Hyde.”

A Child’s Garden of Verses is another classic by Stevenson; in many ways, it is a biography of his early life set to poetry. Stevenson wrote it when he was 35 years old, recalling his childhood joys and cares. Instantly popular, the work went through several editions, and many of its poems became well loved, including “Foreign Lands,” “The Lamplighter,” “The Land of Counterpane,” “Bed in Summer,” “My Shadow” and “The Swing,” to name a few. The work is available in its entirety among a selection of digitized rare books the Library makes available on its website.

“A Child’s Garden of Verses” is notable not only for its prose, but also for its illustrations — it launched the career of an Englishman by the name of Charles Robinson (1870–1937). From a family of illustrators, he went on to become quite prolific, illustrating many children’s books. The fully illustrated edition of “A Child’s Garden of Verses” was first published in 1895 and includes over 100 pen-and-ink drawings. Paging through this digital representation, it is evident that Robinson excelled at intricate work and interpreted Stevenson’s poems with a stylized, fanciful expression that has a marked Art Nouveau flavor. Many of the illustrations also include elegant lettering, helping to meld the text together with the scene at hand. Scroll down for more examples. 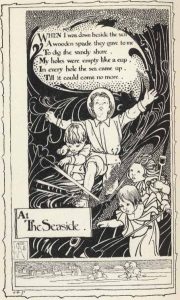 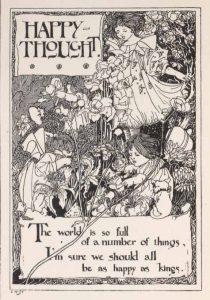