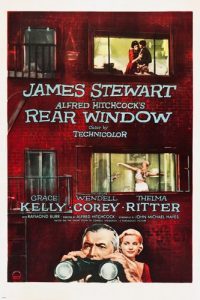 “Rear Window” is the classic film thriller of window-watching and murder; it was added to the Registry in 2005. Former Library of Congress Film Preservation Board member John Belton recapped the film:

“Rear Window” tells the story of a globe-trotting photo-journalist who breaks his leg on a dangerous assignment and is confined to a wheelchair in his Greenwich Village apartment with nothing to do all day but look out the window at his neighbors. The film alternates back and forth between two story strands—a murder mystery and a love story, intertwining the two plot lines through the theme of voyeurism. The hero’s voyeurism is integral to the murder mystery which he pieces together by looking out his window, but it is also connected to his relationship with the heroine. Refusing to commit himself to a love relationship, Jeff (James Stewart) prefers to look out his window at his neighbors across the way rather than to look at Lisa (Grace Kelly), the beautiful woman who is in the same room with him and who repeatedly throws herself at him. He opts for the freedom (and irresponsibility) of a one-way relationship based on voyeurism (seeing without being seen) instead of a two-way relationship rooted in mutual regard, recognition, and concern.

Read the rest of the “Rear Window” essay (PDF).

Trivia: Not surprisingly, Alfred Hitchcock has several films on the National Registry including “Vertigo” (also with Jimmy Stewart), “Psycho,” “Notorious,” and “The Birds.”

Subscribe to the See Here Now! blog and read about another great film every day up until Librarian of Congress Carla Hayden announces the 30th anniversary National Film Registry selections on December 12, 2018.