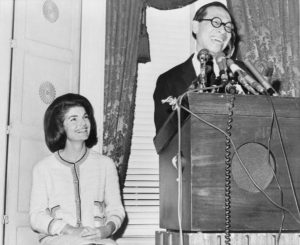 I.M. Pei died Thursday at his home in Manhattan. He was 102. In recognition of his extraordinary achievements, we reprint this guest post by Mari Nakahara, curator of architecture, design and engineering in the Prints and Photographs Division, focusing on his items in the Library. It ran on his 100th birthday.

Former first lady Jacqueline Kennedy with I. M. Pei in 1964. He is speaking to the press about funding for the John F. Kennedy Library and Museum, which he designed.

Chinese-American architect Ieoh Ming Pei celebrates his 100th birthday today, April 26. The Library of Congress is fortunate to have original design sketches by I. M. Pei as well as thousands of his manuscript papers.

With the beautiful spring weather in mind, I decided to revisit this master designer’s work by looking first at his drawings for the Louvre Museum in Paris—I did so while picturing myself humming “Aux Champs-Élysées” and enjoying the walk from the Arc de Triomphe to the Louvre. I then turned to Pei’s designs for the National Gallery of Art in Washington, D.C., and the John F. Kennedy Presidential Library and Museum in Boston. 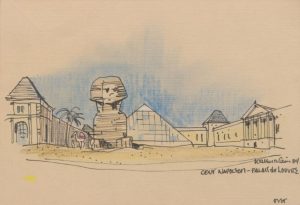 Whimsical rendering of Pei’s design for the Louvre pyramid by architect Walker Cain, 1984.

French President Francois Mitterrand commissioned Pei in 1983 to develop a solution to a long-term problem with the Louvre’s original entrance, which was no longer adequate to receive the increasing number of daily visitors to the museum. Pei’s innovative idea was to insert a 71-foot glass and metal pyramid in the center of a courtyard surrounded by centuries-old structures. As an architectural grad student when the pyramid was completed in 1989, I admired his imagination and technical skill tremendously. A shape from ancient times, made of modern materials, melded beautifully and astonishingly into a historical setting.

Pei’s careful study of axes in site-plan sketches includes one drawing in black and red that determines the center of the pyramid by connecting the site to the Arc de Triomphe. A site plan on the bottom of a sheet of yellow tracing paper highlights the large main pyramid with a small pyramid behind, water pools and pavement patterns. All of these elements repeat the diamond shape, reflecting the pattern in the metal structure of the pyramid. 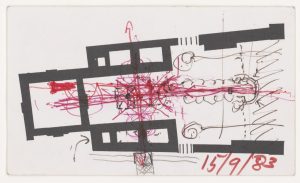 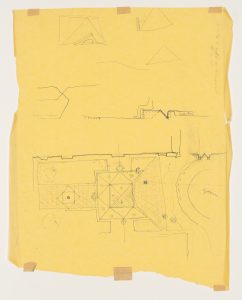 Pei also created multiple models such as those shown below to study the structure and opening of the pyramid. 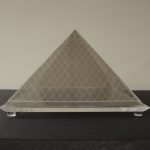 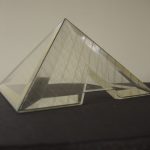 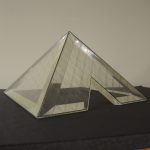 The triangular rhythms in the design sketches are what reveal Pei’s genius for me. He turned the unusual trapezoidal shape of the site to great advantage by creating a smaller but identically shaped trapezoid area and dividing it into two triangular buildings. The axis of symmetry of the larger triangle aligns perfectly with the central axis of the West Building. The hand-drawn diagram with diamond-shaped grids served as the basic module of Pei’s design of the East Building. 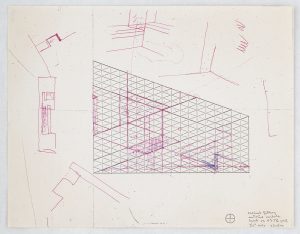 Diagram for Pei’s design for the East Building of the National Gallery of Art, 1969. 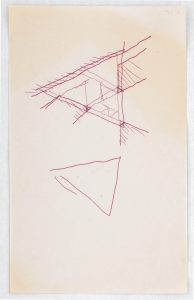 Sketches for the East Building.

Pei started one of his most significant commissioned projects in 1964—the John F. Kennedy Library. During the selection of the architect for the Library, Jacqueline Kennedy visited each nominated architect’s office. While others welcomed her with their definite ideas, Pei told her he did not yet know what the library would look like. He said he would like to propose his idea after he spent more time contemplating what John F. Kennedy would have liked. I think that was a gutsy response, and this answer caught her heart. As shown in the photo at the top of this post, Mrs. Kennedy and Pei are both smiling at the press conference called to announce that public contributions to the fund for the library had exceeded $10 million.

Pei’s serious studies of traffic and pedestrian flows also influenced his design for the Kennedy Library. The two sketches below, right, represent his concept of combining triangular, square and round shapes. 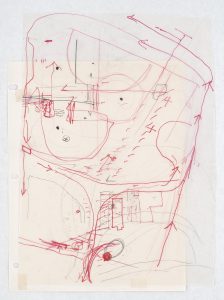 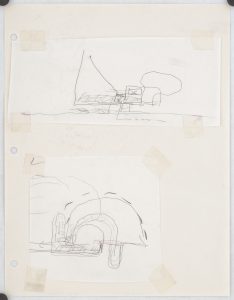 Sketches for the Kennedy Library.

“I think a great building reaches into the folklore, if that is the right word, of the people it serves,” Mrs. Kennedy wrote to Pei in 1981.

“I hope it touches you the way it has affected the lives of all who live near it or discover it as they come to Boston by land, sea or air. . . . You made that possible for Jack. I will always think of it as a monument to your spirit—to your humanity and perseverance. . . . With my deepest thanks that stretch back through the years, and with much love, Jackie.”

This letter must have been very rewarding, especially after all the challenges Pei had to overcome during this project.

The Prints and Photographs Division holds visual materials from the I. M. Pei Papers. Additional materials will be transferred from the Manuscript Division this year.

The I. M. Pei Papers are available for research in the Manuscript Division.

The Motion Picture, Broadcasting and Recorded Sound Division holds transcripts and photographs from the John Peter Collection (1951–95), including an interview with Pei.