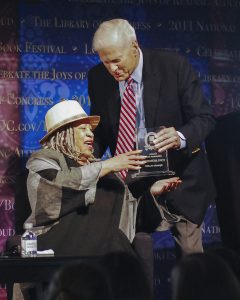 This is a guest post by Guy Lamolinara of the Library’s Center for the Book.

Toni Morrison accepts the Library’s fiction prize in 2011 from James Billington, then the Librarian of Congress. Photo by Kristina Nixon.

The loss of the incomparable writer Toni Morrison leaves a gaping hole in the literary landscape.

Fortunately for us, before she died on Monday, she filled the world with prose that touched millions of readers worldwide. Through her novels, children’s books and essays, she communicated the black experience on a canvas writ large – one that spoke to the pain of slavery, racial prejudice and bigotry for audiences that knew it firsthand as well as for those who learned, perhaps for the first time, about the stinging and horrific aftermath of treating fellow human beings as less than equal.

During the 2011 book festival, held on the Washington Mall, Morrison accepted the award from then-Librarian of Congress James H. Billington, who cited her for “being one of the most unique voices in world literature anywhere.” Scroll down to the end of this post to view a video of Morrison at the festival.

The award was just one of the dozens she received during her career of more than 40 years. Most notably, she received the Pulitzer Prize in 1988 for her masterwork, “Beloved,” and the Nobel Prize in Literature in 1993; she was the first African American woman to receive the honor. 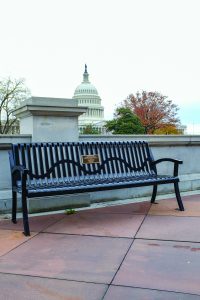 The bench outside the Library’s Jefferson Building, installed in collaboration with the Toni Morrison Society, that honors the Library’s Daniel A.P. Murray. Photo by Shawn Miller.

In 2012, the Library mounted an exhibition called “Books That Shaped America.” It was no surprise that “Beloved” was one of 88 books named to the list, a novel that in 2006 was named by the New York Times as “the best work of American fiction of the past 25 years.”

Morrison was one of the rare literary writers of fiction whose works were also bestsellers. She was able to communicate, in prose both poetic and powerful, her message of the importance of humanity and righteousness in a world that sometimes seems to impart neither.

The Library is proud to have been able to present Toni Morrison to its appreciative audiences on several occasions throughout the years.

The Library is also honored to retain a physical manifestation of Morrison’s legacy on its campus. In 2017, a bench was installed in front of the Library’s Thomas Jefferson Building in collaboration with the Toni Morrison Society as part of its Bench By the Road Project, which recognizes African Americans who fought, in various ways, to improve the lot of their people throughout U.S. history. The bench is dedicated to Daniel A.P. Murray, the first African American assistant Librarian of Congress.