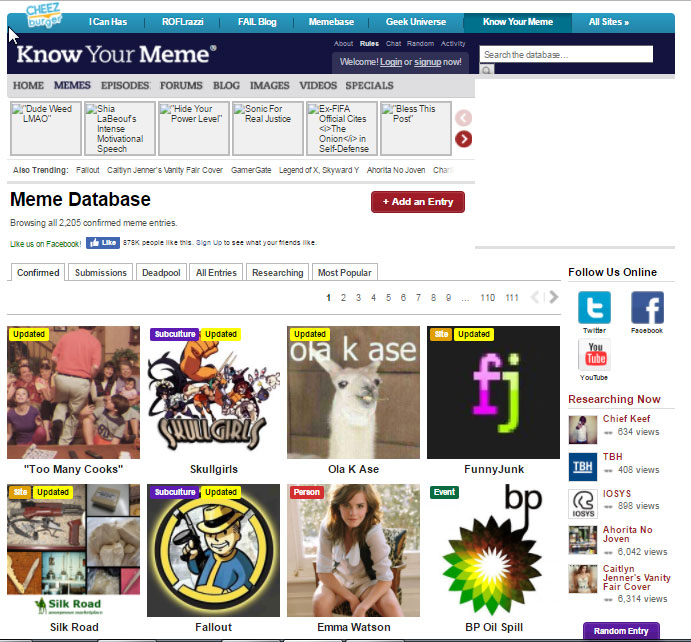 This is a guest post by Nicole Saylor, head of archives at the American Folklife Center of the Library of Congress.

A page of entries from the meme database KnowYourMeme.com.

The Library of Congress just announced the release of the Web Cultures Web Archive Collection, a representative sampling of websites documenting the creation and sharing of emergent cultural traditions on the web.

Why is this important? Increasingly, people take to their smart phones, tablets and laptops to enact much of their lives through creative communication, making the web a predominant place to share folklore. It is where a significant portion of the historical record is now being written.

Archived from the web starting in 2014, the new—and growing—collection of collaborative cultural creation includes reaction GIFs (animated images, often bodies in motion, used online as responses or reactions to previous posts in a communication thread); image macros (photographic images on which a funny caption is superimposed); and memes (in this context, internet phenomena). 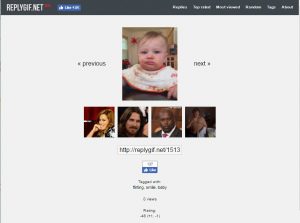 Because the collection aims to document online communities that have established, shaped and disseminated communication tropes and themes, it also includes sites that capture icon-based communications, such as emoji, and those that establish or define vernacular language. Examples of these include “Leet” and “Lolspeak,” two examples of written English language that derive from internet usages. Leet emerged from 1980s software piracy communities, referring to “elite” code wranglers. Lolspeak primarily features in memes and carries collective meaning as the form of English that cats might use. 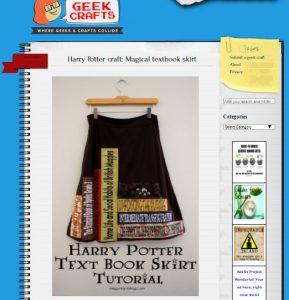 Example of instructional sharing on GeekCrafts.

Some sites represent the DIY (do-it-yourself) movements of crafting and making—for example, Instructables. Still others focus on the distribution and discussion of digital “urban legends” and lore, such as Creepypasta, or vernacular creative forms, such as fan fiction.

The project is a contemporary manifestation of the AFC’s mission to document traditional cultural forms and practices, and results from the collaborative work between the AFC and those steeped in digital culture, both scholars and enthusiasts.

“First and most basically, what’s happening on the internet—all the situated vernacular, all the creative expression, all the remix, all the slang; every in-joke and hashtag and portmanteau—is folklore,” commented internet scholars Whitney Phillips and Ryan M. Milner in a recent interview. “It’s exactly the sort of traditional expression (that is to say, expression that communicates traditional cultural elements, i.e. passes traditions along) that folklorists have focused on for over a century.”

Indeed, contemporary folklorists such as Lynne McNeill, Robert Glenn Howard and Trevor Blank all draw upon folklore concepts when exploring online communities; Howard and Blank have commented on the topic in recent Library blog interviews.

We expect the Web Cultures Collection to be of high research value across a range of disciplines, from cultural studies to linguistics. Other earlier attempts to document web cultures are available in the AFC reading room, including more than a linear foot of printouts of 419 scam emails, which reflect the staff’s long-standing recognition of the need to preserve folk expression on the web.

In recent years, the Library’s web archiving program has provided a way to move us beyond the now-archaic practice of preserving web content by printing it on paper. Credit also goes to former Library staff member Trevor Owens, whose dissertation research on online communities made him a terrific partner in this effort. In July 2014, Owens and others hosted a CURATEcamp in Washington, D.C., focused on preserving the web as cultural platform. This event helped us further develop the collection and its scope.

The Web Cultures Web Archive Collection is dynamic, in that we will continue to add content from each archived site on a regular basis. Additionally, the AFC invites cultural practitioners and scholars who study internet culture to nominate sites to help make the collection reflect the dynamic nature of the web itself. Please send your nominations to [email protected].