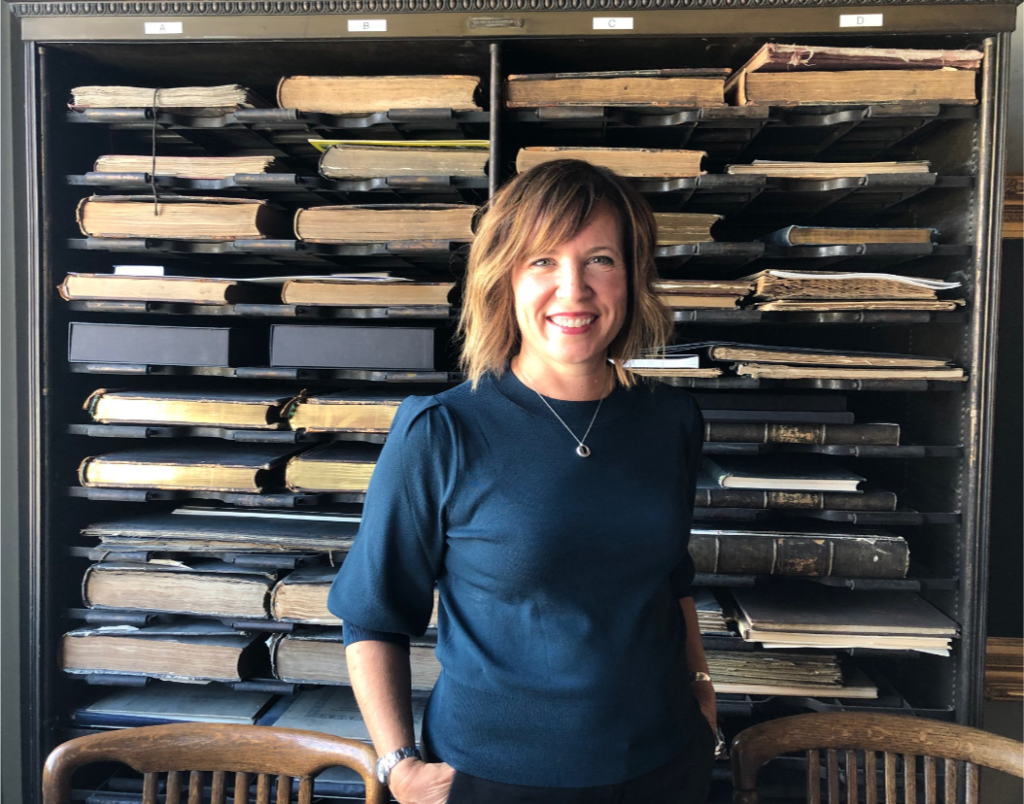 Kimberly Hamlin is a history professor at Miami University in Ohio and a distinguished lecturer for the Organization of American Historians. She researched her latest book, “Free Thinker: Sex, Suffrage and the Extraordinary Life of Helen Hamilton Gardener,” in the Library’s Manuscript Division.

Who was Helen Hamilton Gardener?

Helen Hamilton Gardener is the most interesting and influential suffragist that no one has ever heard of. When she was 23, she was outed in Ohio newspapers for having an affair with a married man (he told her he was divorced). Rather than slink away in shame as a “fallen woman,” she moved to New York City, changed her name (she was born Alice Chenoweth) and reinvented herself.

By 1893, Gardener was one of the most sought-after speakers and writers in the country. In 1910, she moved to Washington, D.C., and joined the National American Woman Suffrage Association (NAWSA). Her colleagues called her their “diplomatic corps” and “the most potent factor” in congressional passage of the 19th Amendment. In 1920, President Woodrow Wilson appointed her to the U.S. Civil Service Commission, making her the highest-ranking woman in federal government and a national symbol of what it meant, finally, for women (at least white women) to be full citizens.

What inspired you to tell Gardener’s story?

wrote about Gardener’s brain donation (yes, brain donation) in my first book. She donated her brain to science when she died in 1925 to prove the intellectual equality of women, and I wanted to learn all about her.

So, I started tracing her life with support from a National Endowment for the Humanities Public Scholar Award. One day, in the Library’s Manuscript Reading Room, I came across a coded letter Gardener wrote revealing her scandalous 25-year-long relationship with Charles Smart, the man she had the affair with. I knew then that I had to tell her remarkable story. I documented her life with research at the Schlesinger Library and, especially, the Library of Congress, along with probate and military records, digitized historical newspapers and her vast writings.

Given Gardener’s influence in the suffrage movement, why is she less well known now than other prominent suffrage advocates?

Gardener is less well known for two main reasons. First, she mandated in her will that her papers be destroyed. So, telling her story was not easy or obvious. Second, much of her “diplomatic work” for the 19th Amendment took place behind closed doors with President Wilson and his top staff, with her friends in Congress and with her next-door neighbor, House Speaker “Champ” Clark.

Can you comment on your use of the Library’s collections?

“Free Thinker” draws most heavily on the Adelaide Johnson collection — I found the letter revealing Gardener’s relationship with Smart there — and the papers of Woodrow Wilson and his top staff, especially Joseph Tumulty.

I also looked at the papers of the members of Congress Gardener lobbied to see how the 19th Amendment got through the Senate after languishing just a few votes shy of passage throughout 1918 and half of 1919. Here, the most instructive sources came from the papers of Sens. John Sharp Williams of Mississippi and William Borah of Idaho. Both collections have small subject files on suffrage, but the frankest debates are documented in chronological correspondence folders from the weeks leading up to key votes in the Senate. The most eye-opening source is a letter from Williams to Gardener explaining why he would never vote to enfranchise Black women in Mississippi.

Do you have advice for other researchers on navigating the Library’s collections?

Consult the expert archivists and staff at the Library and brainstorm together! My second piece of advice — especially for those working on topics related to women, sex and gender — is to take finding aids and indexes with a grain of salt. The stories we seek to tell most certainly exist in the archive, but they may not be indexed or labeled.

What’s next for you?

My next book will be a history of the temperance movement. Temperance advocates tend to get short shrift as killjoys who wanted to shut down the party when in fact I think they were the #MeToo movement of the 19th century. I have done some preliminary research in the Library’s Mabel Walker Willebrandt collection and am excited to return when the Library reopens to the public.