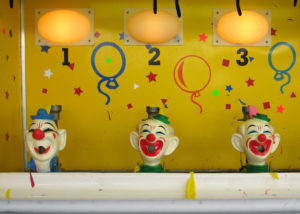 Heading to a summer carnival or state fair? Don’t worry so much about looking foolish carrying an oversized stuffed teddy bear en route to that funnel cake feast. The bigger concern should be in feeling foolish after dropping a wad of cash trying to win that plushy prize, but winding up with empty hands and pockets.

Although not every carnival game is rigged, all can be and many are – making those near impossible to win in hopes you keep trying (and fork over a small fortune). Here’s how you can be played when playing the midway’s most popular “skill” games:

Balloon Pop
Not to deflate your hopes, but this fairgrounds favorite is notorious for sticking it to patrons who try to burst balloons with a thrown dart. How? While fully-inflated balloons pop easy enough, those at some carnival games can be filled to only about one-third of their full air capacity, so darts bounce off without piercing.

To further deflect your throws (and hopes), carnival-used darts may be lighter than store-bought types, with tips that are purposely dulled or broken off. Unless aiming for the fullest balloons, expect this one-two punch to pop-prevent even accurate throws.

Basketball Shoot
Making a free throw from a closer distance than the shooting line on a regulation (or driveway) basketball court may seem like an easy score…if it’s a typical rim. But hoops at some carnivals games are smaller and oval-shaped – not round – so they appear “regular” from your vantage point. But with as little as a half-inch margin of error, even free-throw phenoms can have trouble scoring.

Other foul plays: Balls can be over inflated to make them super-bouncy for a harder score. Backboards are sometimes angled to make it harder to sink shots off it. And netting or shims may be placed between the rim and backboard to interfere with your depth perception.

Milk Bottle Pyramid
Knock down stacked bottles or pins and you win, right? Not when bottles are filled with lead or other hefty helpers to weigh up to 10 pounds each. And the softballs (often filled with cork) or sandbags you’re provided are lighter than usual.

Other carny-provided curve-balls: If just one bottle (usually, those on the bottom and middle) sticks out as little as 1 inch from the others, it can absorb enough of the ball’s force to prevent others from toppling. And beware of curtain backdrops; they can brace closely placed bottles to help prevent them from being knocked over.

Ring Toss
What explains the scant 1-in-700 chance of winning this game, according to a 1980s FBI investigation? Like the basketball shoot, it’s the equipment you’re provided. Often, the rings you’re provided are often just a smidgen wider than the target bottleneck or spike, and made of hard plastic to facilitate bouncing. When the carnival worker shows how easy it is to toss for success, suspect he’s using wider rings than those you’ll be provided, or standing close enough (often directly above the targets) for an easier drop onto the target.

Shoot the Star
The bull’s eye can be on you when trying to shoot out a star or other pattern from a paper target. To thwart your marksmanship, carnival rifles are designed to have less precision than other BB guns – with less air pressure (so many BBs can’t pierce the target) and sights that may been tampered with. Meanwhile, ammo may also be smaller than traditional BBs and in shorter supply than what’s needed to easily accomplish the task.

Tubs of Fun
The goal is to toss softballs into large, angled buckets, and have them stay inside. And there’s no problem doing that when the carny does a demonstration – or even gives a practice throw or two. Reason: There’s already a ball inside the tub to deaden the force of future throws so tosses stay inside the tub.

But once you hand over your money for the “real” game, the balls are removed and without one for deadening, your tosses bounce out – thanks, in large part, to midway mainstay “muck” buckets from the home improvement store whose hard plastic helps give your tosses extra bounce. Some especially unscrupulous carnies may even place springs beneath the tubs for even more bounciness.