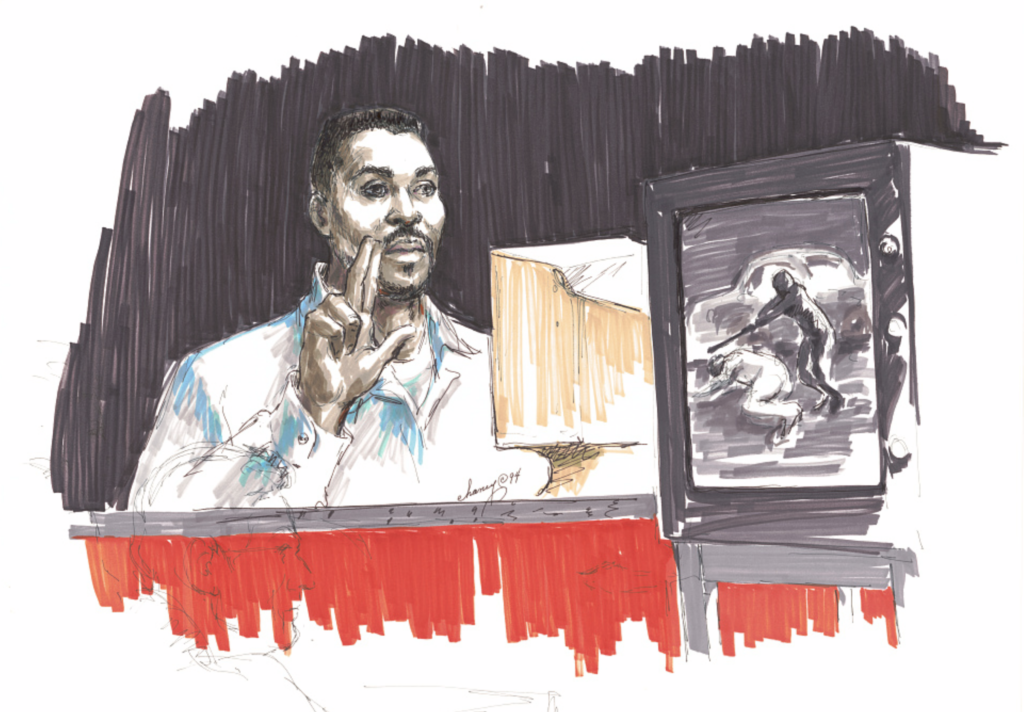 In a hushed Los Angeles courtroom, Rodney King recalled in a faint voice the blows he took from four white police officers wielding metal batons on March 3, 1991. King, who was Black, told a prosecutor that he tried to flee because he was “just trying to stay alive.”

As jurors leaned forward to hear King’s riveting testimony during that 1993 trial, Mary Chaney took to her sketch pad. Chaney, then one of the nation’s top courtroom artists, created 269 sketches from King’s federal and civil trials between 1992 and 1994. “It’s like walking a tightrope without a net,” she told the Los Angeles Times about the pressure she was under.

The beating of King was one of the most pivotal moments in recent American history. It took place 30 years ago today. The Library marks the occasion by announcing that it has acquired those sketches from Chaney’s estate.

“The sketches from the federal trial against the police officers for violating Rodney King’s civil rights and his civil lawsuit against the city of Los Angeles stand out as the type the Library should be collecting and making available to researchers,” said Sara Duke, curator of Popular and Applied Graphic Art.

Chaney, who died of cancer at 77 in 2005, would have been thrilled to see her artwork added to the Library’s collection of landmark court trials, said Lark Ireland, her daughter. Chaney’s sketches joins those of Marilyn Church, Aggie Kenny, Pat Lopez, Arnold Mesches, Gary Myrick, Joseph Papin, Freda Reiter, Bill Robles, David Rose, Jane Rosenberg and Elizabeth Williams among others.

“It gives me chills, it really does,” Ireland said in a recent phone interview. “Recognition was not her goal in life, she lived for her art; it was sacred to her.”

King’s beating — caught on tape by a witness who saw the event unfold from his apartment balcony — shocked the nation because it laid bare the problems of police brutality and racial bias in law enforcement, themes that are still relevant today.

King’s run-in with police began as fairly routine. He was unarmed but on parole for robbery when police attempted to pull him over, suspecting him of driving under the influence. Instead, he led them on a high-speed chase on I-210.The officers beat him viciously after he was finally stopped. Police log records would later reveal that one of the officers seemingly boasted about his role in the beating. 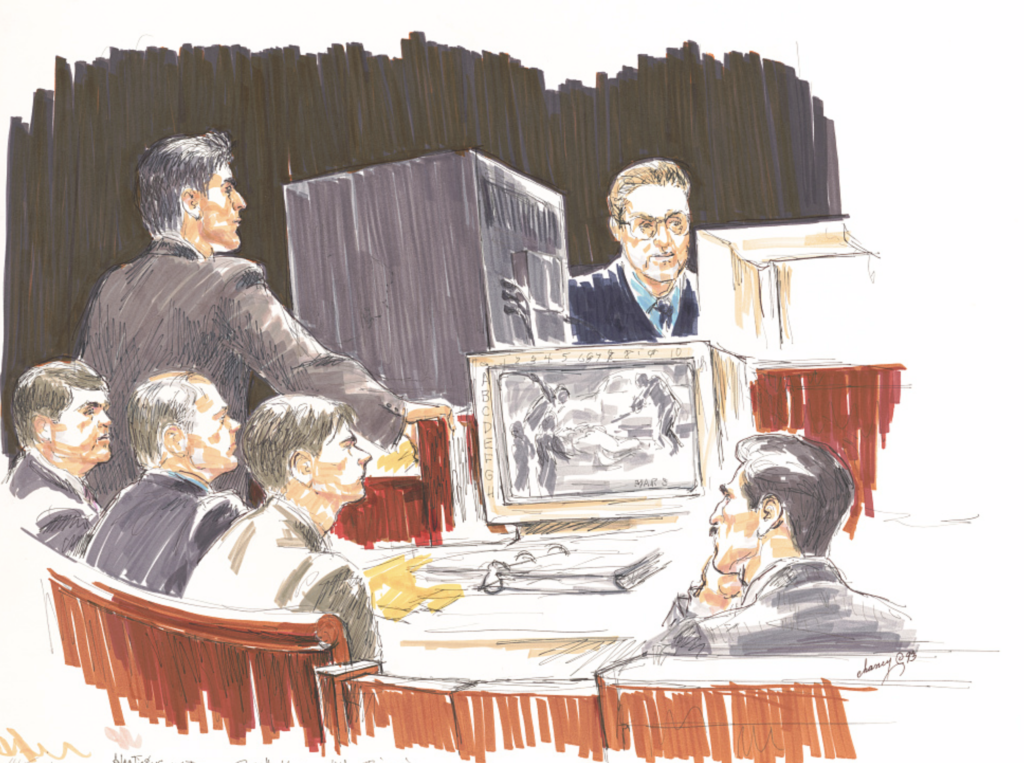 The trials against officers Laurence Powell, Timothy Wind, Stacey Koon and Ted Briseno are considered a critical moment in legal history. The acquittal on state criminal charges in 1992 unleashed five days of looting and rioting in Los Angeles, leaving more than 60 dead, thousands injured and about $1 billion in damages. Businesses left in smoldering ruins took years to recover. It became a landmark moment in U.S. culture.

Chaney did not begun her career in courtrooms, as she started out in commercial art. But cameras are generally forbidden in courtrooms, so sketch artists helped pull back the curtain and catch the essence of significant legal proceedings. At the suggestion of a colleague, she switched from commercial to courtroom art in the mid-1980s. She practiced by sketching her seven children.

“She was the worst cook in the world, but she was always painting or sketching, and we would be her subjects when she’d try to figure out something,” Ireland recalled.

Disciplined and passionate about her art and social causes, Chaney sketched life in downtown L.A., where her drawings of the homeless later became an exhibit. Her pieces were also exhibited at the Museum of Tolerance in Los Angeles.

Chaney was “invisible” in the courtroom, but her poignant sketches became prominent, featured on television and on the the covers of major newspapers, magazines and law journals. She had already worked on many high-profile cases by the time the four LAPD police officers were indicted for excessive use of force in arresting King and would go on to document many more. Her career included trials ranging from that of “Night Stalker” Richard Ramirez to “Hollywood Madam” Heidi Fleiss, the Menendez brothers and O.J. Simpson. 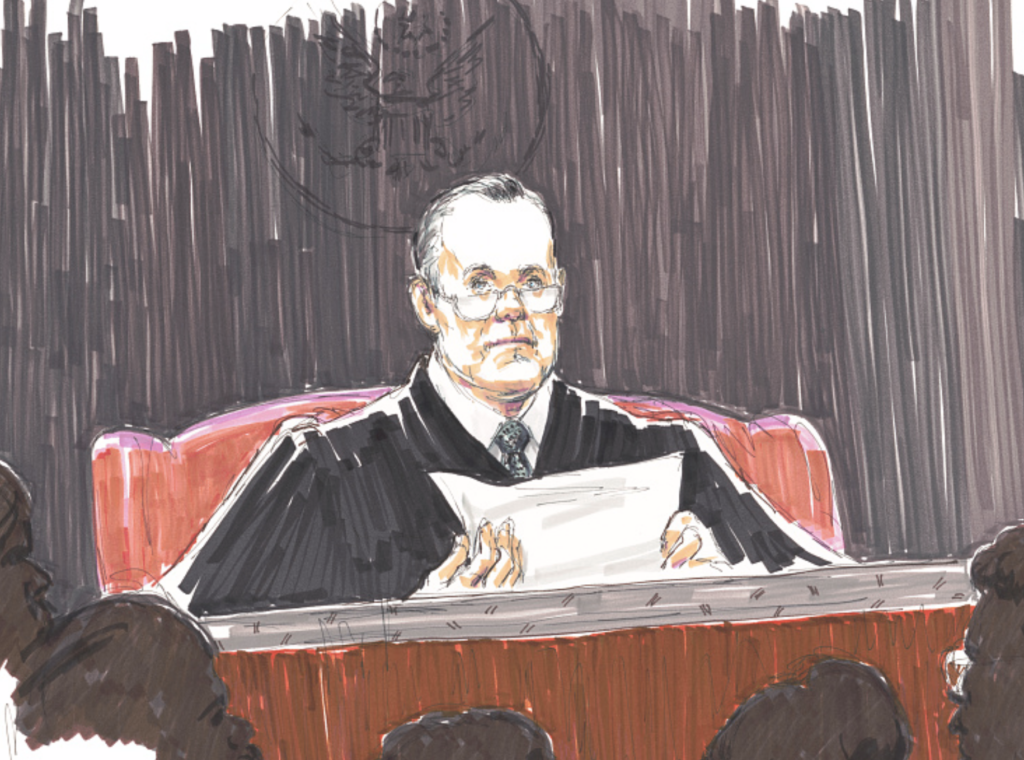 Her work during the King trial shows dozens of indelible moments. On the stand, King described the racial epithets the police officers hurled as they beat, kicked, stomped, tasered and taunted him. When they were done, King had a fractured skull, broken bones and teeth as well as permanent brain damage. Others show King up close on the witness stand, pointing to a video clip or describing his arrest for drunken driving. Ireland still remembers an illustration where King was asked to read something out loud and he confessed that he was illiterate.

Chaney “had quite a passion for civil rights, so when the beating occurred… so many people were horrified about it, as she was,” said Ireland.

Still, she kept her composure through the testimonies, the grainy video of King’s beating and graphic photos of his injuries. The various trials stretched out, in all, for more than three years. After the officers were acquitted of criminal charges in 1992, she sketched the sentencing of officers Powell and Koon on federal civil rights charges in 1993, as well as the civil trial in which a jury awarded King $3.8 million in damages in 1994.

King, who had further arrests and convictions for traffic violations after the trials, accidentally drowned in the backyard pool of his home in Rialto, California, in 2012.

Chaney continued drawing all of her life. Even in hospice, Ireland said, when her mother could no longer string words together, she’d sketch. She’d like to be remembered, Ireland said, simply as someone who “showed up and did her job.”