Enslaved people ran away from bondage so often that slave owners placed some 200,000 “runaway slave” ads in newspapers across the country in the decades before slavery ended following the Civil War. One of these slave owners was George Washington, who conducted one of the era’s most well-documented hunts for a runaway slave, while he was still in office. Arlene Balkansky, reference librarian in the Serial and Government Publications Division, goes through the Library’s newspaper holdings to document Washington’s search for a young woman who defied the father of the country, and then documents the long history of such ads. Balkansky recently published this piece on the Headlines and Heroes blog and we are pleased to post a slightly longer version here.

Fugitive slave ads abounded in American newspapers until the end of the Civil War. These abhorrent descriptions – penned by slave-owners who viewed people as property – still bear witness to the bravery and unique characteristics of the people who escaped slavery, albeit sometimes temporarily, and defied a massively powerful system allied against them.

An important part of that system was the Fugitive Slave Act passed by Congress and signed by President George Washington, who owned more than 100 slaves himself, in February 1793. The act made it a federal crime to assist those who had escaped slavery or to interfere with their capture. It allowed the pursuit of “persons escaping from…their masters” everywhere in the United States, North and South.

Three years later, in the spring of 1796, George and Martha Washington were living in Philadelphia, the temporary capital of the young nation. The president – then 64 and in his next to last year in office – and his wife kept a number of slaves with them, rotating their captives back to their Mount Vernon plantation in Virginia every few months so that they would maintain their slave status under the laws of the day. One of these enslaved people was Ona “Oney” Judge, a slender young woman of about 20, who was a skilled seamstress and served as Martha Washington’s “lady’s maid.” Judge was the property of the Custis family from Martha Washington’s first husband.

When Judge learned that Martha Washington intended, upon her death, to make a wedding present of her to the Washington granddaughter Elizabeth Park Custis Law, she took matters into her own hands. On the evening of May 21, 1796, she waited until the Washingtons sat down to dinner, then walked out of the President’s House in Philadelphia. She was gone.

Washington set out to recover his wife’s property. He had ads placed and rewards posted, leading to this remarkable sentence in The Philadelphia Gazette & Universal Daily Advertiser on May 24: “Absconded from the household of the President of the United States, ONEY JUDGE, a light mulatto girl, much freckled, with very black eyes and bushy black hair.” The First Family was caught completely off guard. According to the ad: “there was no suspicion of her going off, nor no provocation to do so, it is not easy to conjecture whither she has gone, or fully, what her design is.” Shortly after, another Philadelphia newspaper ran a similar ad. 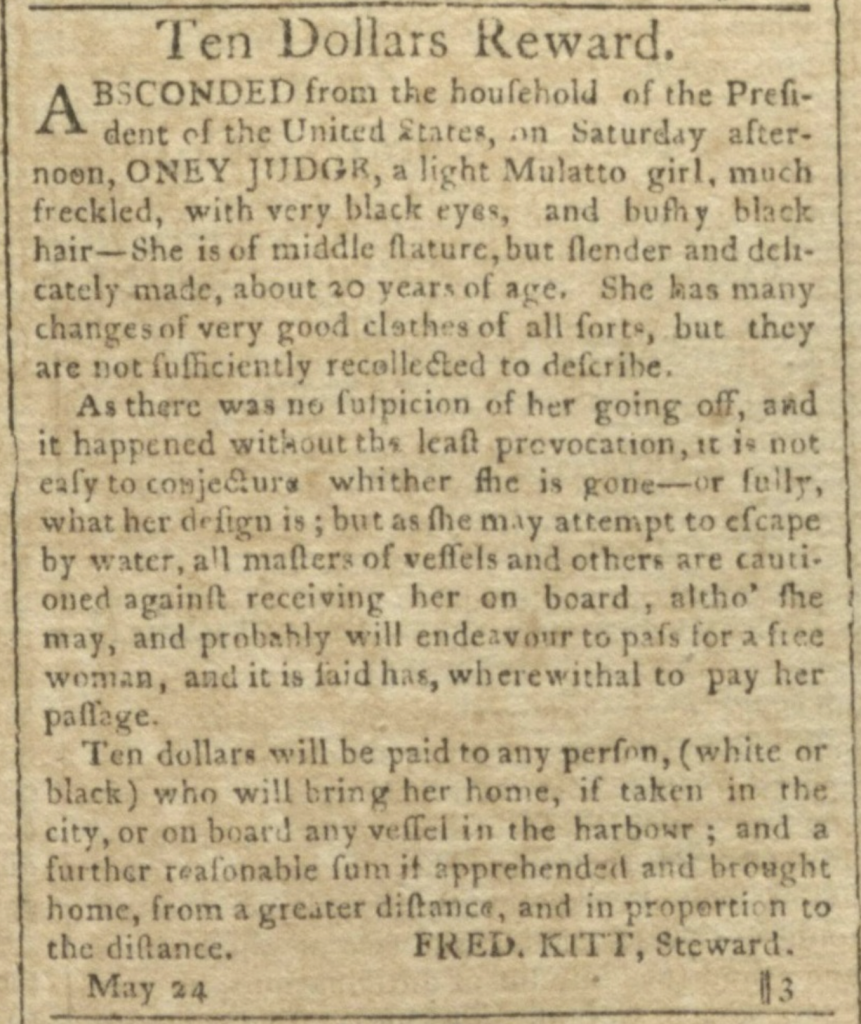 We know where Judge went and the ways in which she was pursued largely through newspaper interviews she gave in the 1840s, when she was in her 70s and technically still a “runaway slave.” She had sailed to Portsmouth, New Hampshire to escape. One of Washington’s aides found her there and tried to convince her to return to Mount Vernon. After she rejected his offers, the aide left, but eventually returned to bring her and her infant daughter back by force. That attempt was thwarted, however, and no further attempts followed. While George Washington made provisions to free his slaves in his will, this did not free those enslaved by the Custis family, including Judge. She remained free through her own actions, living until 1848. 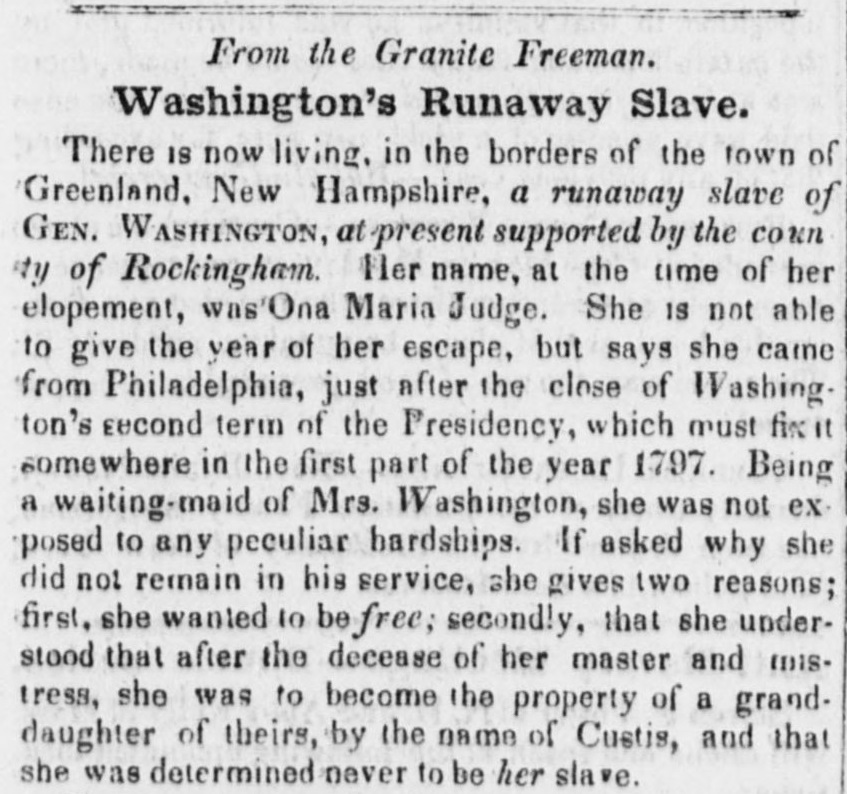 “She wanted to be free,” reported the Anti-Slavery Bugle in 1845, citing an interview with Judge herself. The story appears on the same page as a review of Frederick Douglass’s memoir, Narrative of the Life of Frederick Douglass, an American Slave. Quickly becoming a bestseller, the memoir is an early example of the famous abolitionist’s eloquent and effective writing, in this case documenting his time enslaved and his escape.

The vast majority of those who escaped or attempted to escape enslavement in America were never well-known, though. The only record we have for many are fugitive slave ads, some 200,000 of which were published. Chronicling America provides this Topics Page and a window to finding thousands more ads.

One of the most detailed, humanizing and chilling runaway slave ads that I found in a search of Chronicling America is for Peter (as was common, no last name given). Humanizing in its favorable description of Peter’s appearance and intelligence. Chilling in its reference to his being “easily frightened by the whip.” Peter’s description also makes reference to a scar, as do many of the descriptions in the ads.

The same ad ran in the Southern Telegraph, a newspaper in Rodney, Miss. It ran from May 27 to September 27, 1836, sometimes twice within an issue. It also ran in the Natchez Courier, according to the ad.

Another type of fugitive slave ad was for runaways who had been captured and jailed. I cannot claim a thorough search, but I did not find an ad for Peter “in Jail,” so we have some reason to hope that Peter eluded capture and was able to remain free, although it is possible he was returned directly to the owner. Tragically, many of those who escaped were captured. If they were not claimed, they were sold at auction. 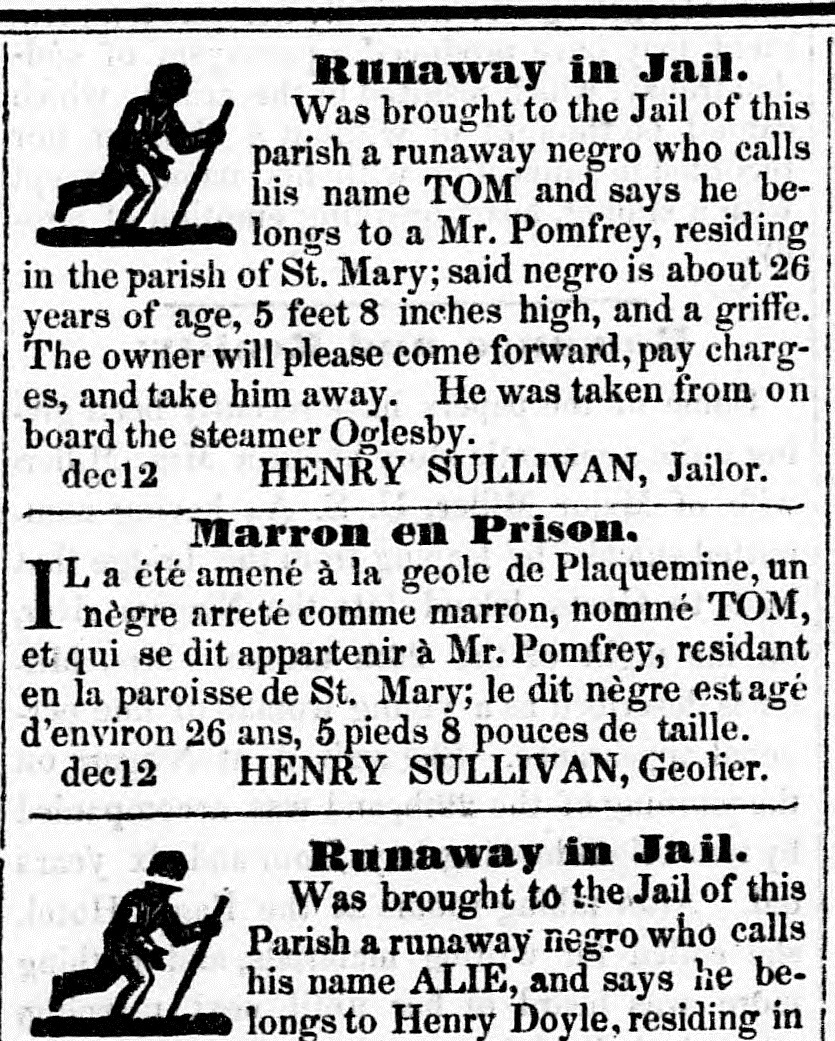 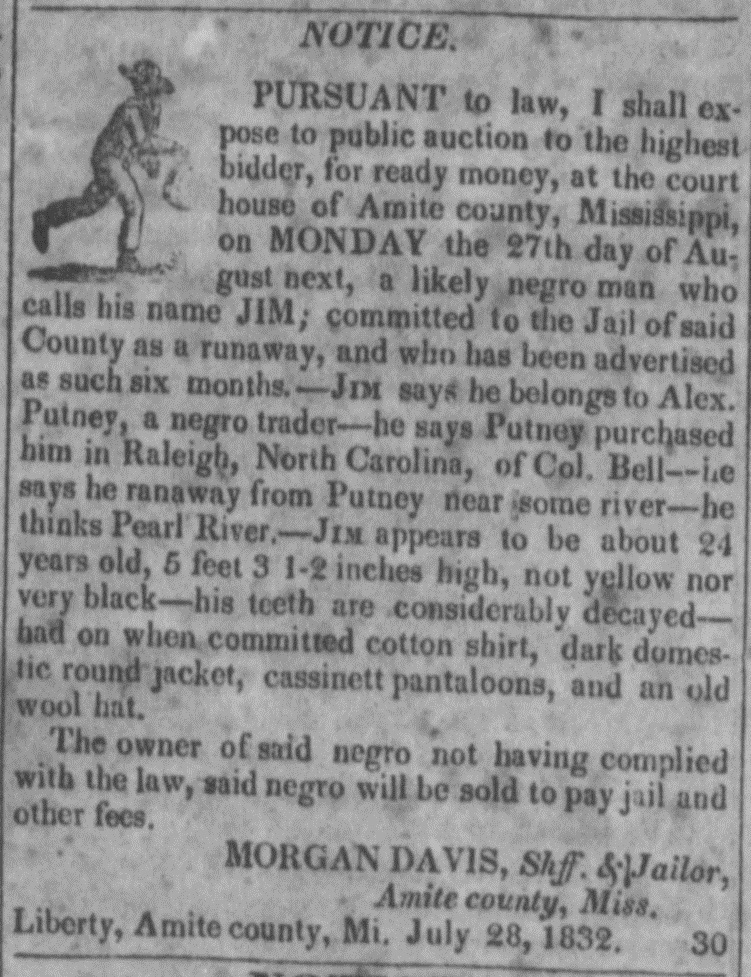 On Sept. 18, 1850, the Fugitive Slave Act, as amended and strengthened by Congress, was signed by President Millard Fillmore, as part of the controversial Compromise of 1850. 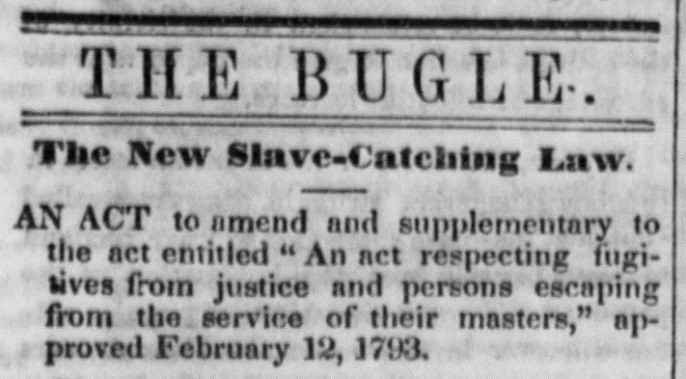 Runaway slave ads continued to be published in newspapers during the Civil War, but they no longer had the full power of the federal government behind them with the passage of the Confiscation Acts and with President Abraham Lincoln’s Emancipation Proclamation, both applying only to those enslaved within the Confederacy. Slavery as an institution in the United States finally ended with the ratification of the 13th Amendment on December 6, 1865. 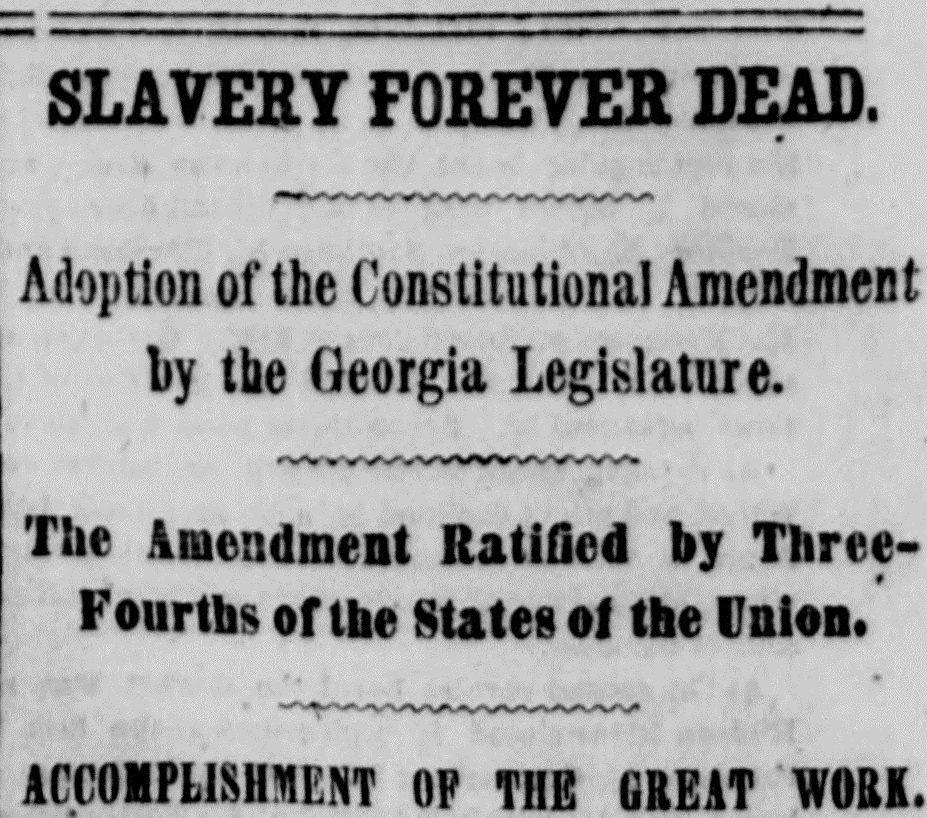