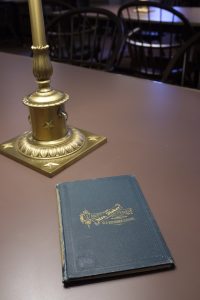 This is a guest post by Lavonda Kay Broadnax, digital reference specialist in the Library’s Research and Reference Services Division.

Thanksgiving is a holiday that evokes thoughts of food and history. Many items in the Library of Congress’ collections capture the intersection between food and history, but the most notable may be an 1881 cookbook in the Rare Book and Special Collections Division by a formerly enslaved person who during her life received an array of accolades for her culinary creativity.

Abby Fisher’s cookbook, “What Mrs. Fisher Knows about Old Southern Cooking, Soups, Pickles, Preserves, Etc.,” was a pioneering work. It was one of the first cookbooks to provide detailed instructions and precise measurements – Fisher wanted to ensure that even a novice cook would have success using her recipes. Her cookbook was also one of the first by an African-American, and the oldest known cookbook by a formerly enslaved person.

Fisher was born in 1831 on a plantation in Orangeburg, South Carolina. Her father, Andrew James, was the French-speaking owner of the plantation and her mother, Abbie Clifton, a domestic enslaved person there. Abby Fisher developed and perfected her distinctive southern flavors as an enslaved cook on the plantation. Her signature recipes combined foods and spices from Africa with American foods.

After the Civil War, she eventually made her way to San Francisco with her husband, Alexander C. Fisher, and four of their 11 children. She used her culinary skills to establish a successful upscale catering business and, with her husband, she created a flourishing pickle, jam and preserve manufacturing business.

Fisher won the “Diploma,” the highest award possible from the Sacramento State Fair. She also won both a bronze and a silver medal from the San Francisco Mechanics’ Institute Fair. One juror noted, “Her pickles and sauces have a piquancy and flavor seldom equaled, and when once tasted, not soon forgotten.” 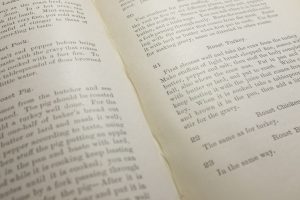 An interior page of the cookbook. Photo by Shawn Miller.

Following these accolades, she was commissioned by the Women’s Institute of San Francisco and Oakland to compile her recipes. The goal was to have her recipes documented so her style of southern cooking could be passed on to future generations. This presented a considerable challenge. Even though Fisher was a successful entrepreneur, neither she nor her husband could read or write. Being a resourceful person, she decided to enlist the assistance of her clientele, and she dictated the recipes.

Fisher passed away between the 1910 and the 1920 census. But thanks to her extraordinary journey from plantation cook to business owner and author, her remarkable culinary traditions live on.

On June 10, 2003, the Henry Ford Museum in Ann Arbor, Michigan, opened a lunch-style restaurant, Mrs. Fisher’s Southern Cooking, created and named in her honor. The menu reflects her specific cuisine and highlights her culinary talents. In addition, reprints of her cookbook are available.

Perhaps one reason the museum created this restaurant is so visitors can sample a taste of history. For Thanksgiving this year, you have a similar opportunity: Mrs. Fisher’s entire cookbook is available online through the Internet Archive.

For more about the array of food-related collections at the Library, read a 2015 blog post by the Library’s culinary specialist, Alison Kelly.

And if you have any questions afterward, let us know!