From “The Fishes of North America,” 1898. Illustration by John Petrie. Rare Books/Special Collections.

This is a guest post by Andrew Gaudio, a reference librarian in the Researcher & Reference Services Division.

Human beings have been fishing for a very long time, but the actual study of fish did not begin until the middle of the 16th century. Things were not exactly precise.

At the time, the definition of a fish was any animal that lived in water. Dolphins, whales, and even hippopotami were all considered fish. We can agree this was a little too broad. (For the record, a fish is a limbless cold-blooded vertebrate with gills and fins living in water.)

Enter the hero of our story, French zoologist Pierre Belon. In 1551, he published “L’historie naturelle des estranges poissons marins,” or, “The Natural History of Strange Marine Fish.” The publisher was one R. Chaudiere of Paris (no further information survives). It ran about 110 pages, had 10 woodcut images of fish as well as a picture of a sea serpent, hippopotamus and a dolphin.

Where’s the hero stuff, you ask?

Right in front of you! This was the first book ever printed to contain an image of a fish! Johannes Gutenberg had set off the revolution in Western publishing (using movable metal type) in Germany in 1455, but more than a century later, this was the first tome to picture a fish. (The things you learn at the Library!) This makes Belon’s work one of the foundational works of ichthyology, the scientific study of fish.

Second – and this is important — Belon backed into his spot in history. He was actually writing about dolphins (which are mammals). The only reason fish are pictured at all is to make sure readers could tell the difference between certain species of fish and dolphins.

For example, the image above is a woodcut of a tuna. Here’s Belon’s description: “Seemingly the tuna, being a very large fish, having some likeness with the dolphin, has given rise to the occasion – by many who may not recognize it – to suspect it for a dolphin. But in the end to remove this error, I wanted to provide its image, and moreover adding nothing of its description, for I do not claim to put anything in writing in this book, which does not suit the exterior and interior anatomy of the dolphin.”

So, while Belon was there first, we need a pretty big asterisk by his achievement.

By the 1700s, the modern definition of fish had emerged. Ever since, books about fish have looked more like current science. One of the first detailed studies of fish is the 22 volume “Histoire naturelle des poissons,” or “Natural History of Fish,” by French ichthyologists Achille Valenciennes and Georges Cuvier. Their book was so massive that it was published over the course of 20 years, from 1828 to 1849. It described over 2,000 species of fish, classified them into different families and groups, then gave them scientific names in Latin. Many of these names are still in use. A copy of this massive work is held in our general collections. Alas, it is not yet digitized, so it isn’t available online. 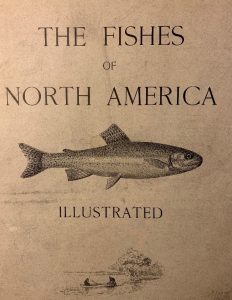 Title page of “The Fishes of North America,” by William Harris. 1898.

Of course, no discussion of fish would be complete without the late 19th century series, “The Fishes of North America,” by William Harris. It was published as a monthly subscription from 1891 to 1898, targeted at anglers who had an interest in the details of the fish they were most likely to catch.

Each section – called a fascicle — contained two lithographs of Petrie’s paintings. At left is an image of the title page of the first fascicle. At the top of this story is Petrie’s image of a yellow perch.

These are just a handful of the rare and unique items we have on ichthyology in our vast collections. You can check them out in our online catalog.