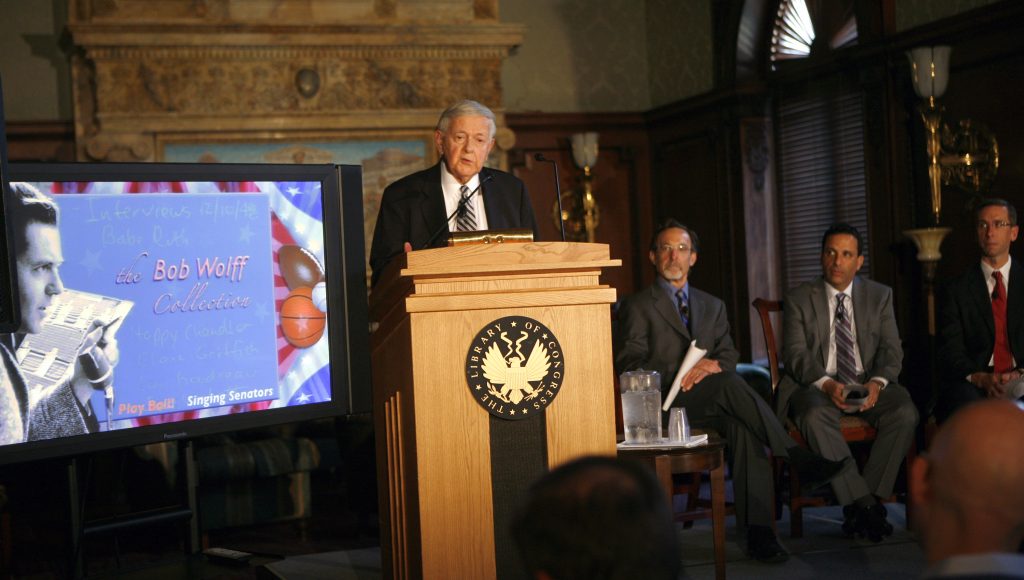 This is a guest post by Matthew Barton, the recorded sound curator in the Motion Picture, Broadcasting and Recorded Sound Division. Bob Wolff, the subject of the post, died on July 15 at age 96.

Bob Wolff at the Library of Congress in 2013.

In spring 2013, the Packard Campus for Audiovisual Conservation of the Library of Congress, was honored to add the personal collection of the late sportscaster Bob Wolff to its holdings. Included were complete recordings of the two games that feature Wolff’s best-known work: Don Larsen’s perfect game in the 1956 World Series and the legendary sudden-death overtime 1958 NFL championship game between the Baltimore Colts and the New York Giants.

Bob was feted in the Member’s Room of the Library of Congress when we acquired his collection and honored with a special video tribute on the Jumbotron at that evening’s Washington National’s game. We also hosted a screening of the baseball musical fantasy “Damn Yankees” at the Packard Theater in Culpeper, Va.

The Bob Wolff Collection reflects the longevity and versatility of one of the greatest practitioners of the announcer’s art that sports broadcasting has known. From 1946 on, Wolff worked in both radio and television, covering collegiate and professional sports, including baseball, football, basketball, hockey, soccer, boxing, tennis and track and field. Somehow, he also found time to announce the annual Westminster Kennel Club Dog Show at Madison Square Garden for 33 years. 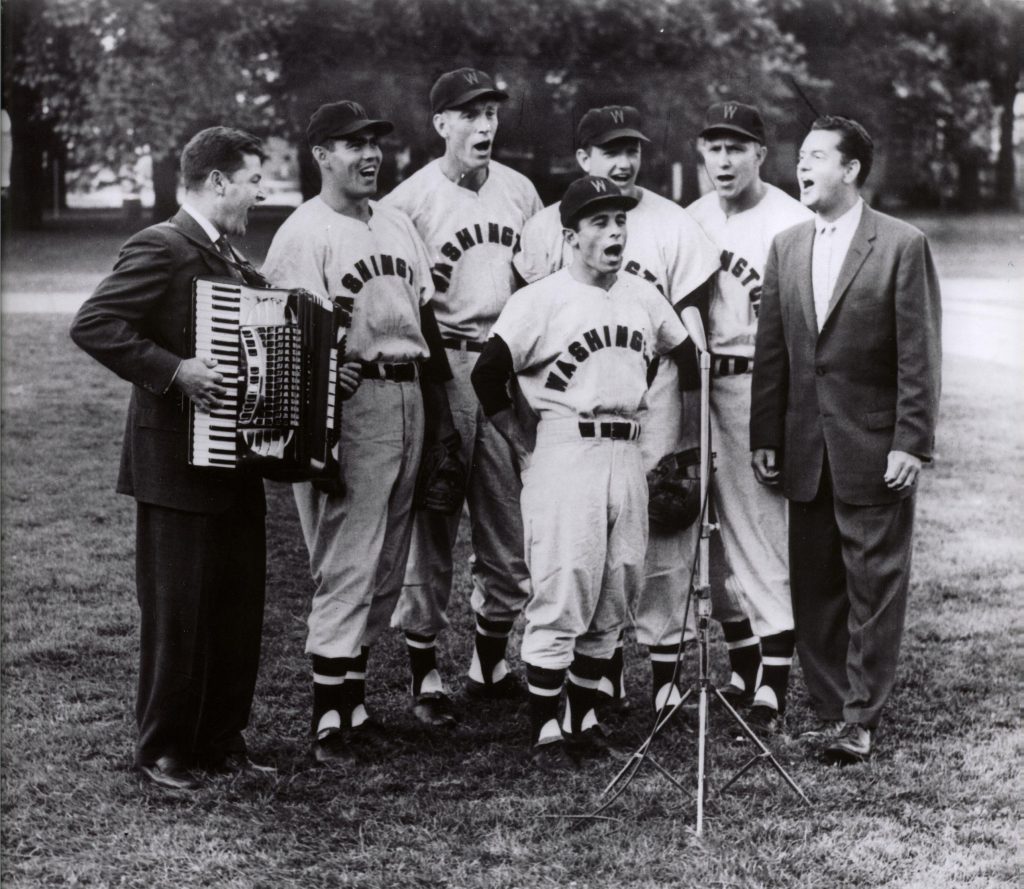 Bob Wolff (right) with the Singing Senators, a group he formed with players from Washington’s major-league team. The players in uniform are (from left) Truman Clevenger, Jim Lemon, Albie Pearson, Russ Kemmerer and Roy Sievers.

In the 1940s, few believed that such broadcasts amounted to anything lasting; at that time, it was neither easy nor cheap for an individual broadcaster to make personal professional-quality recordings of his work. Wolff used recordings mainly as a production aid that enabled him to capture an interview during the day for use during his evening sports news programs. He soon started a “mystery guest” feature in which he would replay a clip from an old interview along with a few hints as to the guest’s identity, and invite listeners to send their guesses to him on postcards. Perhaps this practice convinced him to record and save his work when he could, for he continued to do it for decades to come.

For some interviewees, such as Babe Ruth, one can imagine Wolff keeping a recording in any case. But preserving an interview with the young coach of the Tri-Cities Blackhawks franchise of the fledgling National Basketball Association seems much less likely, no matter how good a talker future Boston Celtics coaching legend Red Auerbach may have been in that 1949–50 season.

Wolff’s broadcasting career began while he was still a student at Duke University in 1939. He was a fixture of the airways in his native New York from the 1960s on, but it was in Washington, D.C., that Wolff really learned his trade. Although the Washington Senators had been a contending ball club in the war years, they went from bad to worse while Wolff covered them from 1946 to 1960. They finished last five times, next to last four times and over .500 only once. Nevertheless, Wolff called their games enthusiastically, strummed his ukulele with the “Singing Senators” group he formed and gave airtime to everyone from upper management to stadium peanut vendors.

Wolff’s announcing performance for the 1956 All Star Game in D.C. earned him a spot in the booth for Mutual Network’s broadcasts of that year’s World Series, when Don Larsen pitched his perfect game. After that, his career highlights become too numerous to list here, but include three more World Series, national broadcasts for NBC and ABC and a stint as the New York Knicks’ announcer that included its two championship seasons in the early 1970s. He joined News 12 Long Island in 1986, where his commentary was a regular feature until early this year.

This short blog post can only begin to describe Bob Wolff’s career, art and achievement. Soon, examples of his preserved work will be available on the Library’s website. For now, I’ll leave you with a short recording from the Bob Wolff Collection. It is a 1947 interview by two reporters of Jackie Robinson (1919–1972), the first African American to play baseball on a major league team in the modern era.