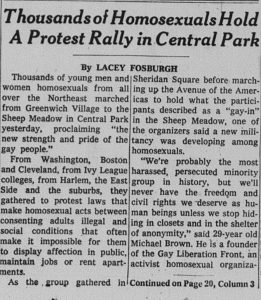 This is a guest post from Amber Paranick, who does great work over at the Headlines & Heroes Blog, which chronicles the Library’s vast collection of newspapers and comics. Here, she looks at how one of the seminal moments in gay rights — the Stonewall Rebellion, which took place 50 years ago today — was portrayed in newspapers at the time.

The Stonewall uprising was widely covered in the underground press or alternative newspapers such as Village Voice (New York, NY), Rat Subterranean News (New York, NY), East Village Other (New York, NY), The Berkeley Barb (Berkeley, CA), The Los Angeles Free Press (Los Angeles, CA), Quicksilver Times (Washington, DC), and Great Speckled Bird (Atlanta, GA). Underground press publications started during the radical movements of the 1960s and these papers often played an important role in the U.S. media landscape by covering stories and topics that were underreported by their mainstream counterparts. The Library of Congress has an Underground Newspaper Collection on microfilm that includes several hundred newspaper titles that thrived in the 1960s and early 1970s, most of which are concerned with themes or subjects of particular reference to the era. 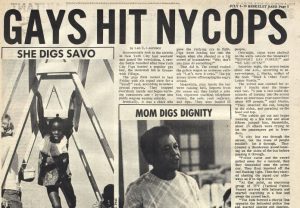