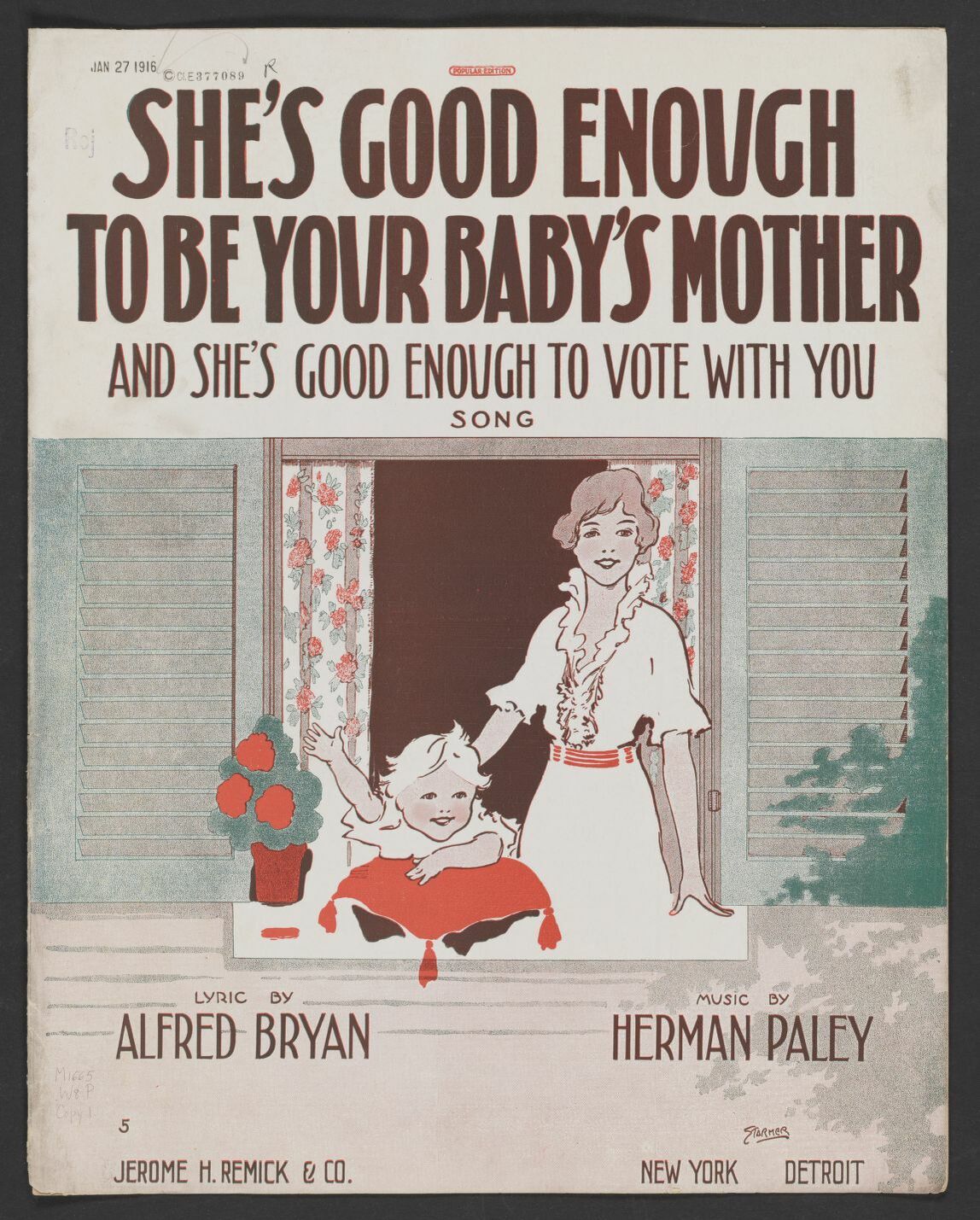 Our colleague Cait Miller published a pair of delightful posts about songs in the women’s suffrage movement over on the “In the Muse” blog recently, the most recent of which is here. But it being Women’s History Month, we just had to know more about one of the sheet music covers she featured — the one with the remarkable title, “She’s Good Enough to be Your Baby’s Mother and She’s Good Enough to Vote with You.”

Published in the winter of 1916,when the suffrage movement was a hot-button political issue, the song (and its sheet music, featuring perky mom and radiant baby) are a nifty bit of insight into an earlier version of American pop culture. The song, after all, at face value, is an appeal to the male idea of a woman’s worth, as if women had no other merit than what men might deign to assign them.

First, while it might not have been the “Single Ladies (Put a Ring on It)” of its day, the song nonetheless made waves, as it fell into a well-established social groove. Suffrage songs had been quite the thing during the decades-long struggle for women’s voting rights. The first National Women’s Rights Convention was in Massachusetts in 1850. The next year at a convention in Ohio, Sojourner Truth made her immortal “Ain’t I a Woman?” speech. Icons such as Elizabeth Cady Stanton and Susan B. Anthony formed the American Equal Rights Association a little over a decade later, and years of progress, setbacks (and no small amount of infighting) followed. Songs were routinely written for and sung during these meetings, usually spirited affairs about uplift and equality. The Library holds hundreds of them in its collections.

By the middle of the second decade of the 20th century, the Progressive Era was well established, and suffrage songs had left the meeting halls and entered pop culture. Several states had already passed suffrage laws — Colorado, Utah, Idaho and California among them — but the federal government had not. As you might imagine, protest marches drew thousands.

One of these marches, pictured below, took place in New York in late October, 1915. The careful eye will note that while nearly all the marchers are women (wearing white, to represent the movement), the overwhelming majority of the street-level viewers are men. 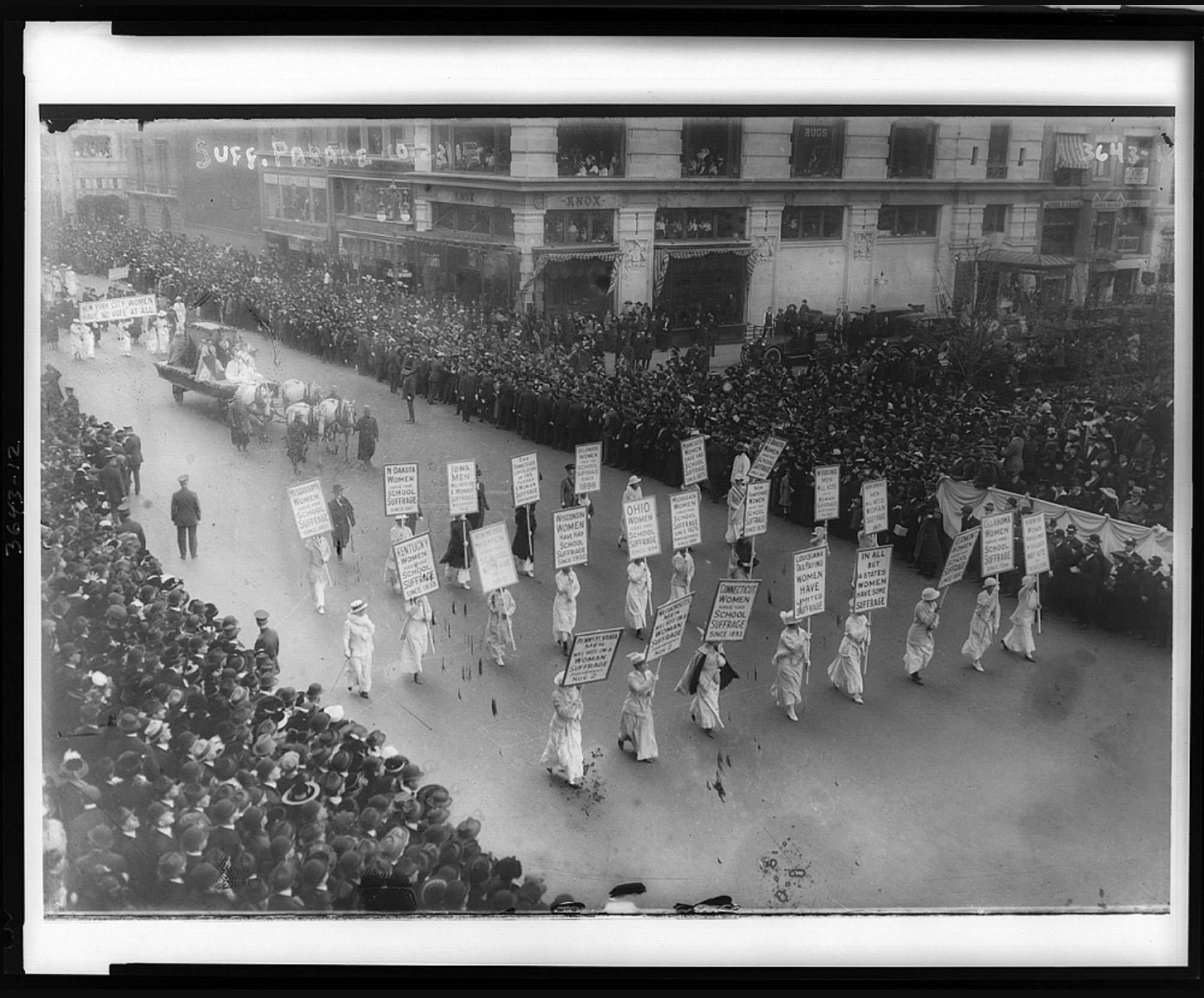 New York in this era was also the home of Tin Pan Alley, the hothouse of American popular music. Novelty songs were all the rage, so how could such a huge hometown protest, and a national issue, go ignored by the industry?

These were big-time players. Bryan, a Canadian who had moved to New York in the 1880s, was hitting his mid-career stride. He had written “Peg ‘o My Heart” for the Ziegfeld Follies a few years earlier — one of the most memorable songs of the era — and was a charter member of The American Society for Composers, Authors and Publishers (ASCAP) in 1914. Today, he’s in the Songwriters Hall of Fame for a career that included Broadway and Hollywood. Paley, the composer, was a Russian immigrant who also had a long career in the music industry in New York and L.A.

They combined for a bouncy, vaudeville-like melody that rolled along, letting you know you’re supposed to laugh. They’re having good-natured fun, by all appearances:

“This is an example of popular music that draws upon women’s suffrage as a topical theme,” says Miller, a Music Reference Specialist at the Library. “It was not intended for suffrage meetings or parades.”

Further evidence of its impact is that it was recorded by Anna Chandler, a mezzo-soprano and an established star. In 1912, the Edison Phonograph company ran an ad in the Saturday Evening Post listing her (she’s on the far right, middle row, wearing what appears to be flower-covered hat), alongside stars such as Sophie Tucker, John Philip Sousa and the wildly popular Billy Murray. 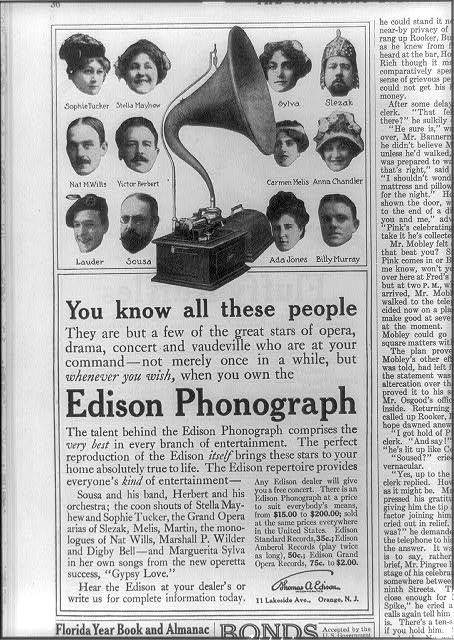 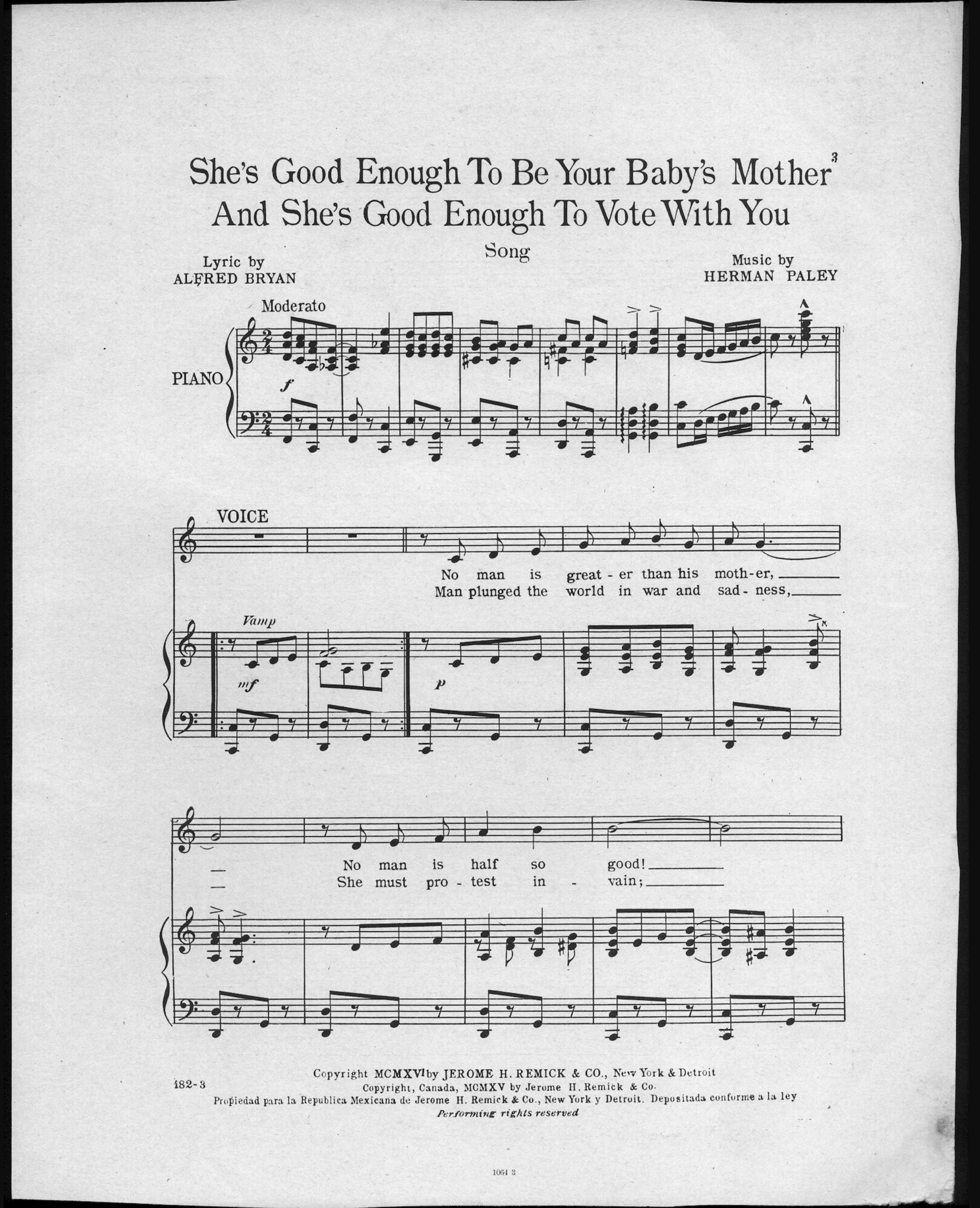 It lingered in the cultural memory, as comic relief and as reference to the period. It was anthologized in 1999’s “Respect: A Century of Women in Music” (Rhino), along with the likes of Judy Garland’s “Somewhere Over the Rainbow,” Marian Anderson’s “Nobody Knows the Trouble I’ve Seen,” and Patti Page’s “The Tennessee Waltz.” Minnesota musician and songwriter Ann Reed included it in her 2007 show, “Heroes: A Celebration of Women Who Changed History and Changed Our Lives,” produced by Minnesota Public Radio. Denise Tabet, a Minneapolis-based actress, sang it live on stage, bringing a burst of laughter and applause from the audience when she hit the chorus – a century after Anna Chandler had done the same in a distant, different era.