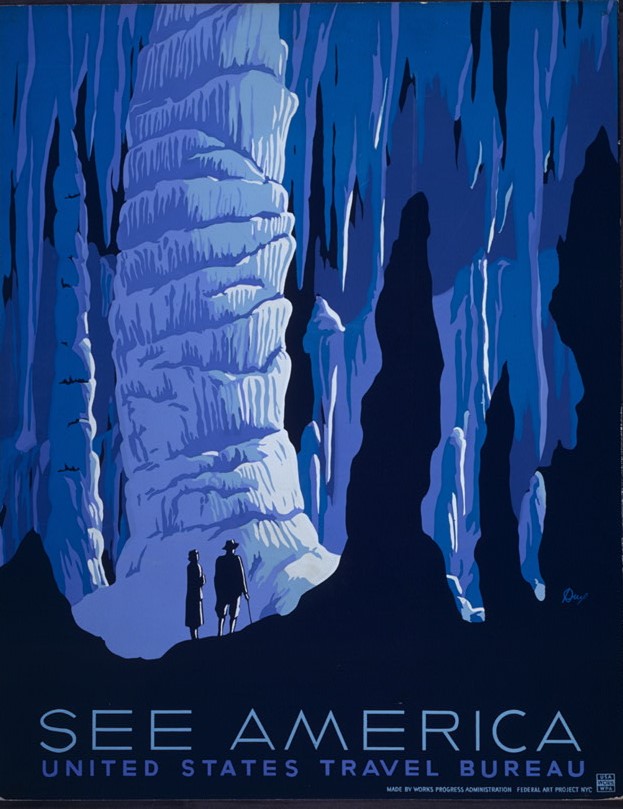 Jan Grenci, a reference specialist in the Prints & Photographs Division, wrote a short piece about travel posters in the July/August issue of the Library of Congress Magazine. It’s been expanded here.

Some of the Library’s most popular Free to Use and Reuse photographs and prints are the travel posters from the golden age of the art form, the 1920s to the 1960s, when artists used graphic design, bold lines and deep colors to render destinations more as a mood than just a place.

Take, for example, that image above. The massive scale of the stalagmites and stalactites, the huge cavern opening — they combine to dwarf the man and woman in the foreground. The blueish/purple geologic formations, lit softly from the right, are offset by the shadows in deep black. She appears to be dressed in a skirt, blouse and (one hopes) sensible walking shoes; he, his hat at a jaunty angle, is clad in a coat, jodhpurs and riding boots, complete with a gentleman’s walking stick. They appear not just to be enjoying a day’s hike so much as contemplating the immense passage of time itself.

SEE AMERICA, the poster commands. The America in question is timeless, majestic and full of adventures. No

And that was the idea of the posters — to evoke a mood. One could feel the color and excitement of Times Square, the sea air in a lush garden in Puerto Rico, the spray from an eruption of Old Faithful in Yellowstone National Park. 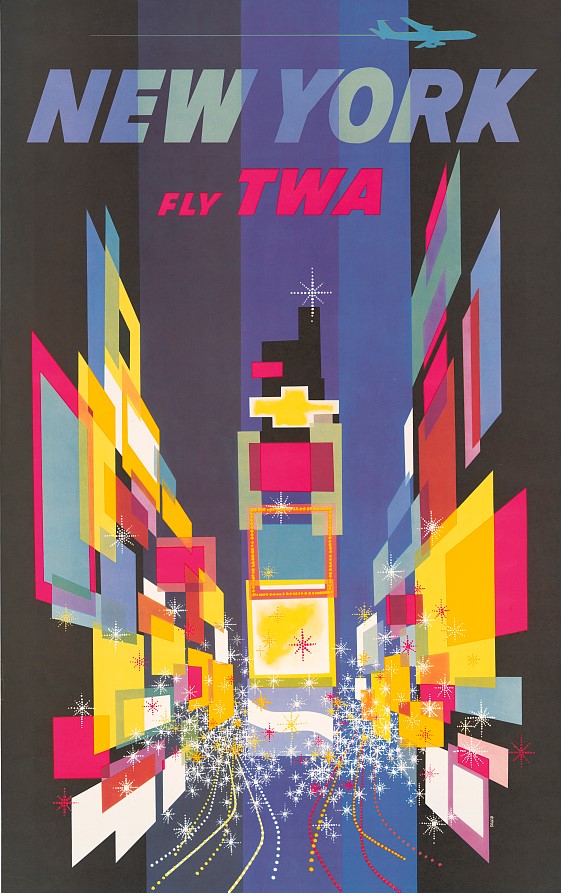 This golden era came to an end in the 1960s, when ad agencies began to go with flashy color photographs; the wide-angle view of the blue domes and white cliffside houses of Santorini, the caldera far below; the sunlight and golden beaches of Acapulco; snow-capped Mount Fuji, always from a distance, framed by blue sky above and green fields below. Lovely images, no doubt, but they put place over mood.

The Library holds thousands of travel posters from this era, designed to inspire viewers to get out on the road. Henry Ford’s Model T ignited a revolution in personal travel — you didn’t have to book passage on a train that was restricted to a certain track You could get in your car and go most anywhere, taking as much time and as many routes as you had the interest to explore. The family road trip was born.

Many of the Library’s collection of travel posters were created by the Work Projects Administration between 1936 and 1943. The WPA, a New Deal agency designed to help lift the nation out of the Great Depression, included Federal Project Number One, which hired writers, photographers, actors, artists and musicians to help keep the nation’s arts alive.

Other posters (like the blue cave) were created the United States Travel Bureau, designed to boost domestic tourism. They featured national parks and encouraged all to “See America” — the catchphrase on a number of them. 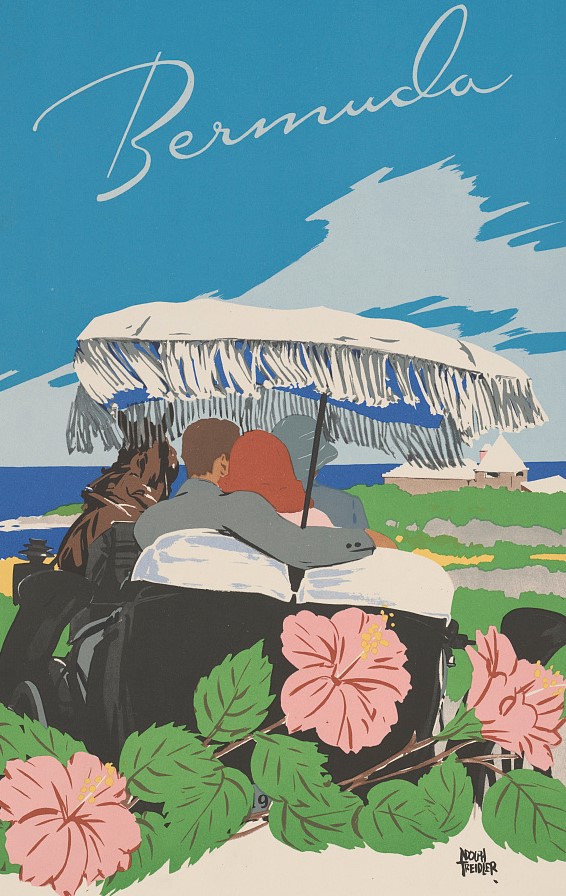 Blue skies and blue waters. Bermuda in the 1940s, as advertised by the nation’s Department of Tourism Artist: Adolph Treidler. Prints and Photographs Division.

But there was plenty of international travel, too, and the posters from the era reflect a similar approach of mood over place. The Bermuda Islands Department of Tourism and Trade Development was going all in on tropical romance and summer breezes in this lovely blue-water, blue-sky poster, pictured above. A horse-drawn carriage, wind coming in off the Atlantic and a secluded resort at water’s edge. That’s not a bad mood. Not at all.