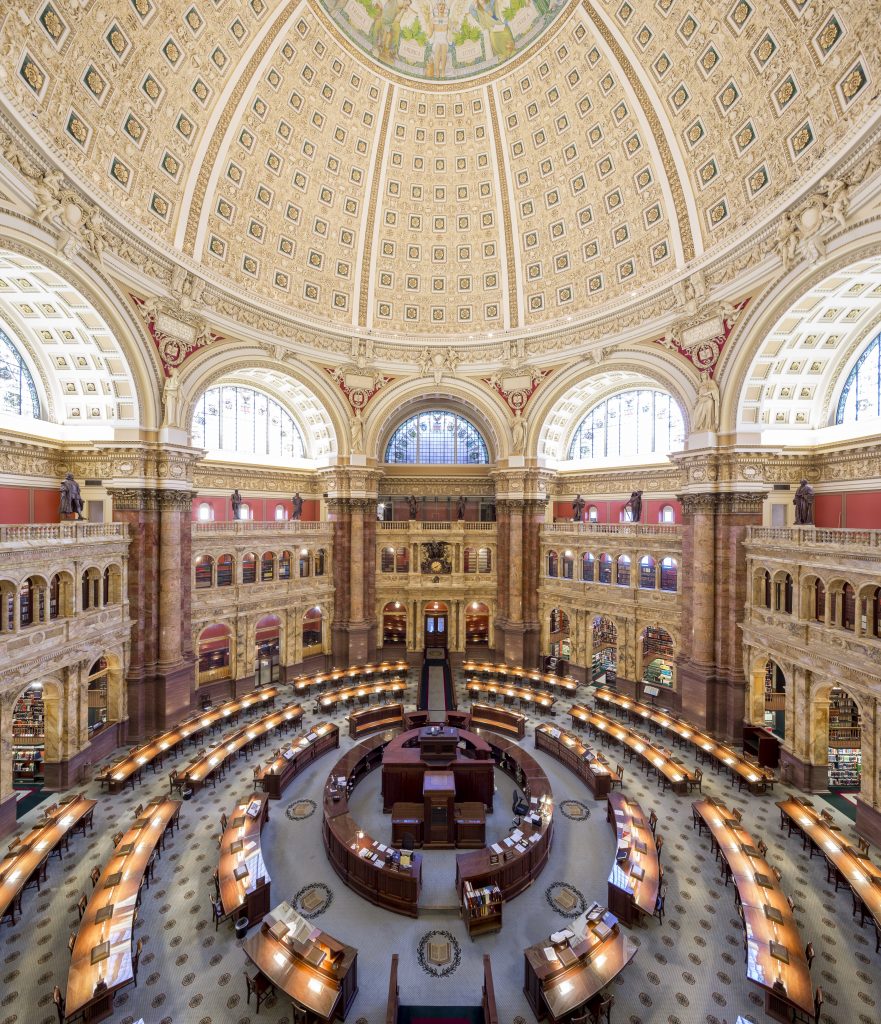 This is a guest post by John Haskell, director of the Library’s John W. Kluge Center.

The statues that look down on the Library’s Main Reading Room – there are 16 in total – were selected to represent the diverse traditions of knowledge. The Kluge Prize builds on this tradition of valuing all areas of human inquiry. Photo by Shawn Miller.

After an extensive selection process, Librarian of Congress Carla Hayden will announce the winner of the 2018 John W. Kluge Prize for Achievement in the Study of Humanity on June 12. The privately endowed prize, which celebrates the impact of knowledge on society and governance, comes with a $1 million award. Understanding how it fits into the mission of the Library of Congress requires a brief historical excursion.

The Library was established by an act of Congress in 1800, with James Madison providing the intellectual leadership behind the effort. The idea that members of Congress needed immediate access to the best Enlightenment thinking, classical philosophy and other influences on modernity was self-evident to him and many others – most notably, Thomas Jefferson.

Back at Monticello after his presidency, Jefferson offered his own vast and eclectic collection to the Library when its original holdings were burned along with the Capitol during the War of 1812. A few members of Congress objected to purchasing a collection of books that ranged so broadly in scope, but Jefferson countered: “There is in fact no subject to which a Member of Congress may not have occasion to refer.”

Given the reach of today’s federal government into virtually every area of science and mathematics, the humanities, foreign affairs, technological innovation, economics and the other social sciences, coupled with the fact that Congress is responsible for authorizing and overseeing all government activity, no truer words could have been spoken. The importance of knowledge to lawmakers has never been greater.

Today, the Library’s collections are by far the largest in the world. The Library has virtually limitless potential to make connections between scholarship and the challenges facing 21st-century society.

Following the Jeffersonian ideal, the John W. Kluge Center was created with a private endowment to, in the words of its charter, “reinvigorate the interconnection between thought and action.” Jefferson meant for the collections to be a resource to inform policymakers. Keeping with that tradition, the charter envisioned an ideal in which Kluge Center scholars would “have the opportunity both to distill wisdom from the rich resources of the Library and to stimulate, through conversations and meetings, Members of Congress, their staffs and the broader policy community … [bridging] the divide between knowledge and power.”

The recipient of the Kluge Prize is expected to reflect on the interconnection the center’s charter cites. The request for nominations for the prize states:

Nominees … are expected to have developed, in their creative pursuits and career, unique insights into the forces that have shaped and continue to shape humankind. Candidates should be distinguished by their intellectual achievements, by the fundamental importance of their work and its impact on public affairs, as well as the ability to communicate the significance of their work to broad audiences.

The Library was created based on the notion that ideas matter, that thought must inform public policy for the nation to thrive and for humankind to advance. Establishing the link between knowledge and governance is at the heart of everything we do at the Kluge Center. The Kluge Prize was created to celebrate the achievement of that goal.