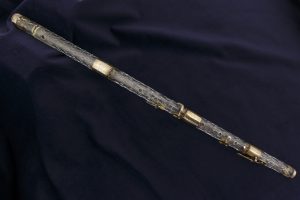 It is well known that Dolley Madison rescued a now-iconic portrait of George Washington as she fled the White House on August 24, 1814, just before British troops set fire to Washington, D.C., during the War of 1812. Less well known is exactly what else she managed to take with her amid the chaos of the attack.

“At this late hour a wagon has been procured, I have had it filled with the plate and most valuable portable articles belonging to the house,” the first lady and wife to President James Madison wrote to her sister, Lucy Payne Washington Todd, in a letter she had started the day before. The articles packed reportedly included red-silk velvet draperies, a silver service and blue-and-gold Lowestoft china purchased for the state dining room.

Might an exquisite crystal flute made for James Madison by Claude Laurent of Paris – one of 20 Laurent glass flutes in the Library’s Dayton C. Miller Collection – also have been packed?

Laurent patented his “flute en cristal” in 1806 in France, winning a silver medal at the Paris Industrial Exposition the same year for his invention. Known for their intricate cut patterns and ornate jeweled keys, the instruments – which are functional – soon became very popular. They were owned by emperors, kings and other heads of state, including Madison.

Madison’s flute is distinctive in that Laurent made it specifically for him in honor of Madison’s second inauguration. Its glass is styled in a way that Laurent seems to have reserved for especially illustrious figures, and its silver joint is engraved with James Madison’s name and title and the year the flute was made: 1813.

The flute stands out among the Library’s Laurent holdings: it is one of only two made of crystal. Initially, all 20 Laurent flutes were thought to be crystal. But about five years ago, expert staff at the Library began to study the flutes to determine how to address worrying signs of deterioration on some of them.

Noninvasive analysis of the flutes’ composition using X-ray fluorescence showed that 18 of the flutes are actually made of potash glass as opposed to high-leaded glass, or crystal. Those 18 glass flutes remain precious – only 185 Laurent glass flutes survive worldwide today – but the crystal flutes are exceptionally rare. 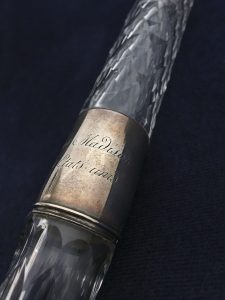 Laurent engraved Madison’s name and other identifying details on the crystal flute he made for Madison. Photo by Shawn Miller.

It isn’t totally clear how Madison’s flute made its way from Laurent to Madison, as no system for tracking package delivery existed in the early 1800s, and no record of the original arrival of the flute remains. We do know, however, that Madison received a letter in French dated March 25, 1815, inquiring about the arrival of “une flute en Cristal de mon invention” and asking whether Madison found the flute agreeable. The letter is cataloged under “Laurens” in Madison’s papers – the final letter in the signature is styled with a flourish, making it difficult to decipher.

One thing we know for certain about the flute is that Dolley Madison’s son from her first marriage, John Payne Todd, bequeathed the flute to Dr. Cornelius Boyle of Washington, D.C., in his will.

Cited as “the bad boy” in a White House Historical Association profile, Todd was known for gambling, womanizing and drinking – he was jailed several times for disturbing the peace. Yet he was also a lover of fine art, and both James and Dolley Madison helped to support him and get him out of scrapes. Apparently, at some point, one or the other bestowed the flute on Todd.

Dr. Boyle treated Todd before Todd died in 1852 at age 60, at which time he was in considerable debt. It is possible, but not certain, that Todd willed the flute to Boyle in payment for medical services.

In any case, Boyle’s heirs arranged for the flute to be exhibited in 1903 in the United States National Museum – part of the Smithsonian Institution – after which they sold the flute to Dayton C. Miller with the understanding that he would ensure its display in an important national museum.

Miller was an Ohio physicist with a passion for flutes and wind instruments. He donated his collection of more than 1,700 instruments, including the Madison flute, to Library of Congress in 1941.

So, was the crystal flute saved by Dolley Madison as she fled a White House under siege? The flute’s value, portability and origin – Madison was known to appreciate fine European goods – would seem to make it a likely candidate for rescue if it was indeed at the White House, as research into the Madisons’ whereabouts during the period suggests that it was. Many years later, in a letter to Dolley Madison, Thomas Ludwell Lee Brent, also seems to recall the flute having been in Washington: “How I should like to be in Washington this winter,” he wrote wistfully in 1842, “and play for you upon that sweet cristal flute.”

But, alas, unless or until more documentation about the precious flute’s history is unearthed, we will have no way to know for certain whether the flute escaped the White House with Dolley Madison in 1814.

Read more about the Dayton C. Miller Collection on the Library’s website.

This blog post incorporates research into the Library’s Claude Laurent flutes by Carol Lynn Ward-Bamford, senior curator of musical instruments; Lynn Brostoff, a chemist and conservation scientist in the Preservation Research and Testing Division; and Dorie Klein, an intern from Smith College who has worked with Ward-Bamford and Brostoff.