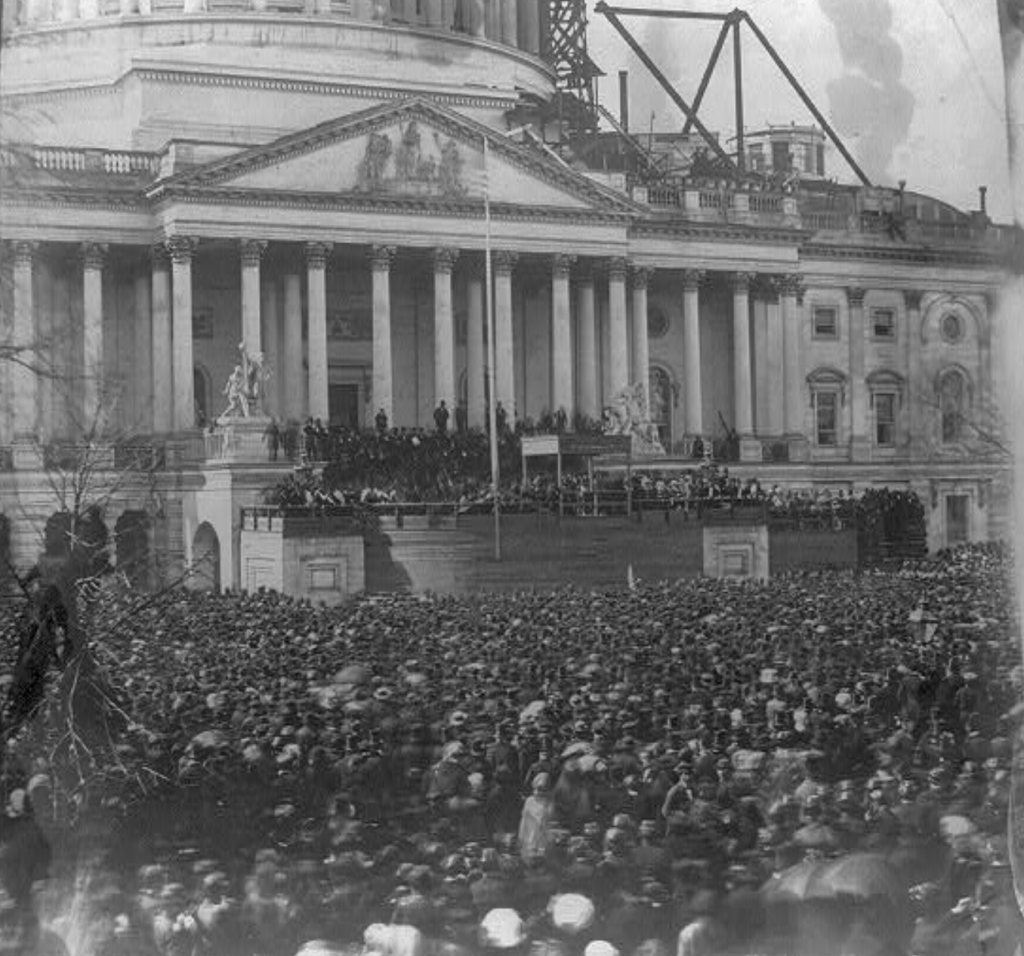 This is a guest post by Adrienne M. Lundgren, senior photograph conservator in the Conservation Division.

Abraham Lincoln’s first inauguration on March 4, 1861, marked a pivotal moment in the nation’s history. A country on the brink of a civil war had all eyes looking to the new president as either the preserver of the nation or as an enemy of the South. Threats of assassination loomed; a plot had been discovered and narrowly averted a month earlier.

The photo taken of that moment has become an icon of U.S. history: Lincoln, a tiny dot in front of the unfinished Capitol Building; the faint slant of sunshine; the crowds crammed into every available vantage spot, including two men perched in a leafless tree. Here’s the New-York Tribune describing it: “The avenue in front of the portico was thronged with people, the crowd extending to a great distance on either side and reaching far into the Capitol grounds, and every available spot was black with human beings, boys and men clinging to the rails, mounting on fences, and climbing trees until they bent beneath their weight.”

Only three prints of this negative are known to survive. One is at the Library, a salted paper print kept in the Benjamin B. French album in the Prints and Photographs Division. (French headed the inauguration preparations.)

Alexander Gardner, then employed at Matthew Brady’s Washington gallery, is most often credited as the man behind the lens, though he never actually said that he was. Over time, it became attributed to him, which seemed reasonable. He took Lincoln’s portrait many times, he recorded some of the most lasting images of the Civil War and he photographed Lincoln’s second inauguration.

However, my recent research in the Library’s collections has shown that he did not take the historic image of the first inauguration. That photographer, instead, was the unheralded John Wood.

If you’ve never heard the name, don’t worry. He’s virtually unknown in American photography. If five of his images did not appear in “Gardner’s Photographic Sketch Book of the War,” he might not be mentioned at all.

But Wood was the government’s first official photographer. Montgomery C. Meigs, chief engineer for the capitol extension, hired him on May 14, 1856, to document major building projects in and around D.C. I first came across his work in 2016, while researching Civil War photographers who used their craft to make maps. After seeing Wood’s pictures of the Capitol construction, I was shocked that he had not earned a more prominent position in the annals of American photography. His work on architectural subjects was magnificent. His use of large formats, as large as 11 x 14 inches, also made him noteworthy.

Perhaps he isn’t widely known because he was a government photographer, a faceless bureaucrat of sorts. And while his views are captivating, they certainly were not profitable in a 19th century photographic marketplace focused largely on portraiture.

In any event, when I saw his photograph of the 1857 inauguration of James Buchanan, I was struck. It was taken from an elevated platform to the right of the president — just like the Lincoln inauguration photo. Further, I was able to identify Wood as the photographer of several other images in the French album.

Next, there’s the very paper it’s printed on — salted paper. This technique of printing was common in 1857, but by the time 1861 rolled around, Gardner and most other photographers had transitioned to albumen papers. Wood, however, was still using it. It was here that I began to think that the Lincoln photo might be by Wood, but I wasn’t at all sure. 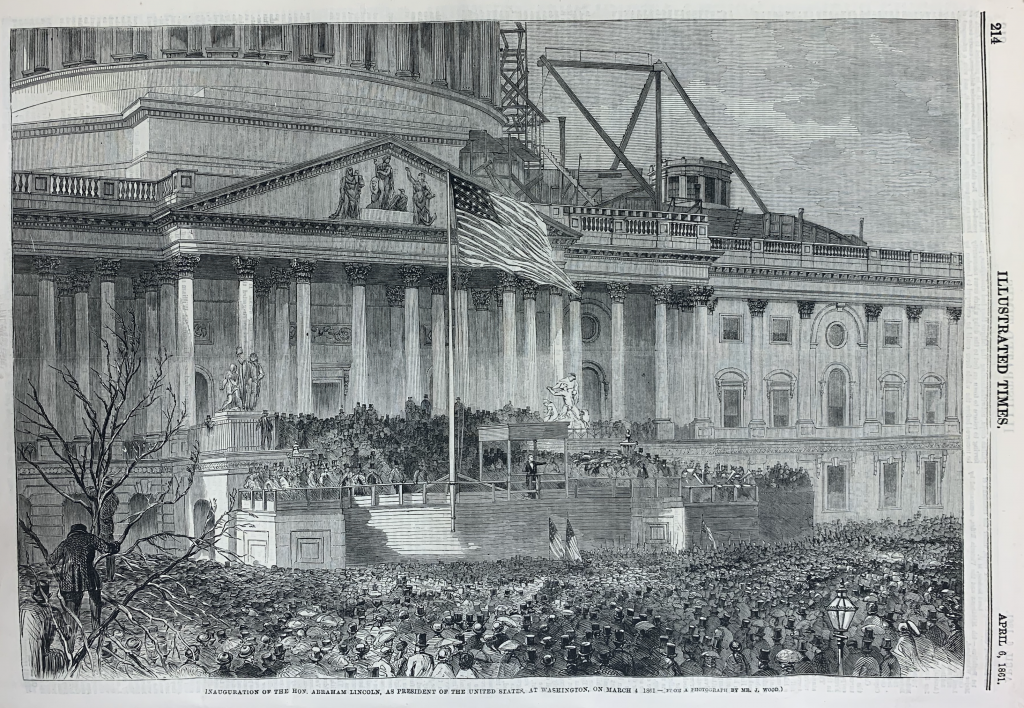 The proof came after a year of searching. In the April 6, 1861, edition of the Illustrated Times, a British weekly, I located a woodcut engraving that was almost an exact match of the famous photograph. The caption: “Inauguration of the Hon. Abraham Lincoln, as President of the United States, at Washington, on March 4, 1861 — (From a photograph by Mr. J. Wood.)” The woodcut took a few artistic liberties, such as making Lincoln prominent and filling in the blurred American flag, but the rest is exact. Remember the newspaper story describing men climbing trees to get a better view? Compare the two in the lower left corner. As with so many other details, it’s a precise match.

Lastly, this photograph was clearly taken from an elevated platform, meaning the photographer had privileged access. It makes sense that this honor would be given to the Capitol’s official photographer, who had worked the previous inauguration from much the same vantage point. The New-York Tribune story confirms there was such a platform: “A small camera was directly in front of Mr. Lincoln, another at a distance of a hundred yards, a third of huge dimensions on his right, raised on a platform built especially for the purpose.” 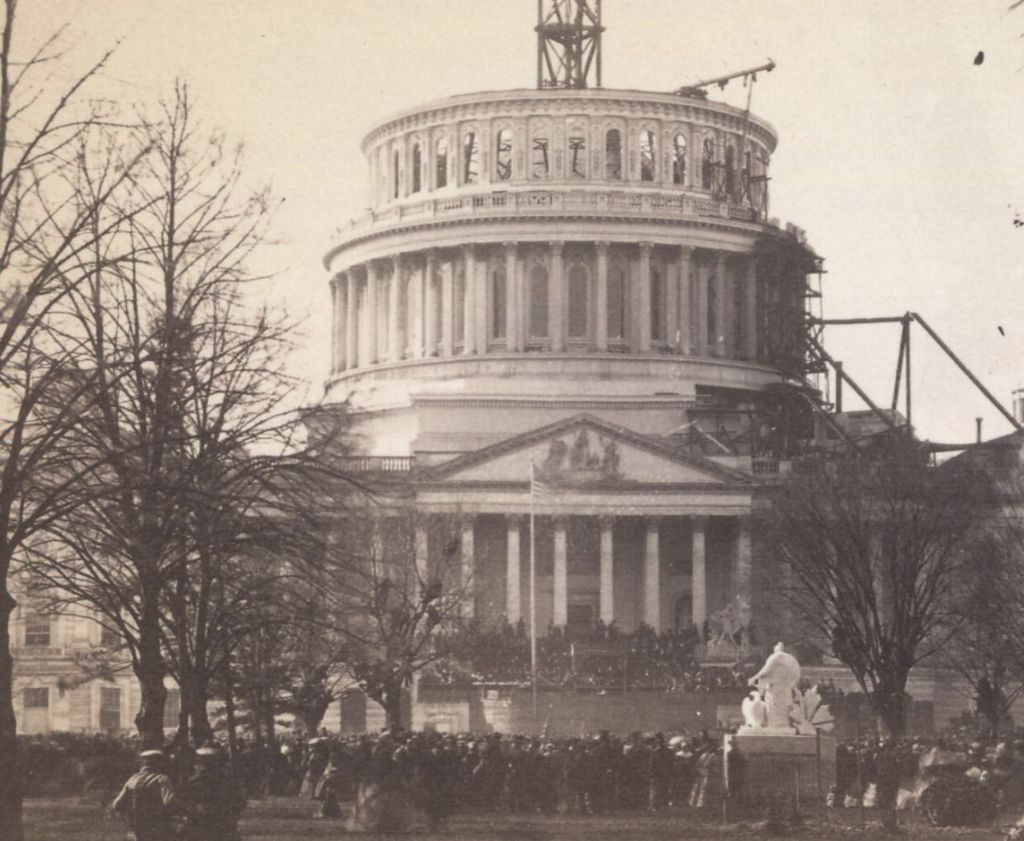 News reports mention a camera about 100 yards away from the portico; this is likely it. From the Montgomery C. Meigs papers. Manuscript Division.

Wood did indeed work with a large camera. And so it’s my conviction that it was him on the platform that day, opening the shutter for two or three seconds, the light streaming onto a collodion glass plate negative, preserving the image of a man, and a nation, poised on the precipice of a new world order.

These early photographers deserve our consideration, and it gives me great pleasure to bring another one of them who was lost in the shadows back into the light.