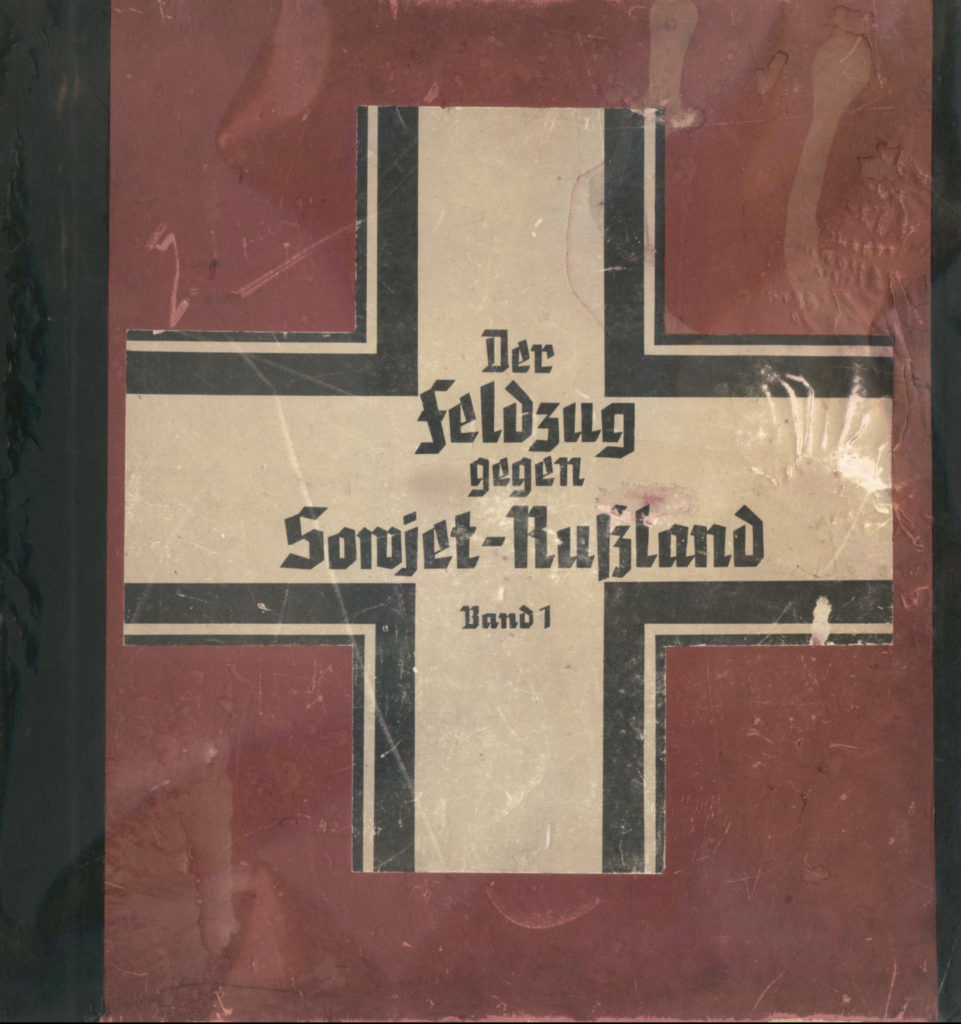 The cover of the German atlas of Operation Barbarossa. Geography and Map Division.

This is a guest blog by Ryan Moore, a cartographic specialist in the Geography and Map Division.

Hitler’s armies were nearly at the gates of Moscow in December of 1941, 78 years ago this month. Victory seemed assured. The German high command decided to celebrate and document the six months it had taken its armies to reach the outskirts of the Soviet capital. Echoing the grand scale of their invasion, they created a huge commemorative atlas: 2 feet wide and 2 feet tall, with a “Balkenkreuz,” a black and white bar cross, dominating the cover.

In the narrow picture, the atlas contains 123 battlefield situation maps that document Germany’s wildly successful first six months of operations on the Russian front. In the larger frame, it tells, like some massive bible of war and brutal conquest, a story of a German victory that almost was.

The oversized book chronicling Operation Barbarossa (the invasion’s code name) resides in the Library’s Geography and Map Division. It is without peer and may be the only one ever made. How this historical gem came to reside here is lost to history. Map librarians speculate that American troops captured the atlas in 1945, during the fall of Germany, and brought it stateside along with a large volume of German military documents.

The atlas is titled Der Feldzug gegen Sowjet-Russland: Band I. Operationen Sommer-Herbst 1941 vom 21. Juni-6. Dezember 1941. This translates as The Campaign against Soviet Russia: Volume 1, Operation Summer-Fall 1941, from June 21 to December 6. The atlas was printed by the German general staff in 1942. The table of contents lists a foreword, but it is missing and does not appear to have been included, suggesting the atlas may be a proof.

It wasn’t unusual for the German military to make such huge maps, which they called campaign atlases. Dating at least back to the time of Frederick the Great, German officers created them to document and celebrate military actions. They also used the information for planning, post-combat study and critical analysis by officers and cadets. Whether Hitler and others in the German high command saw this atlas in its finished form is not known.

This is how it came to be.

In August of 1939, the Nazis and Soviets signed a non-aggression pact and secretly agreed to divide Poland between them. A few days later, World War II began with the Nazi invasion of Poland on Sept. 1. The Soviets invaded from the east on Sept. 17. Poland was swallowed.

But on June 22, 1941, Hitler launched Barbarossa, a massive surprise attack on the Soviets. It employed more than 3.8 million men, mostly German but also Croatian, Italian, Belgian, Spanish, Romanian and Hungarian. They fielded a front that was some 1,900 miles long, stretching from the Baltic Sea in the north to the Black Sea in the south. Opposite the Germans stood some 150 Soviet divisions. To deal with a territory and an enemy so large, the Germans divided responsibilities among what they called Army Groups North, Centre and South. These formations relied on speed and firepower to execute blitzkrieg, the German word for lightning war. 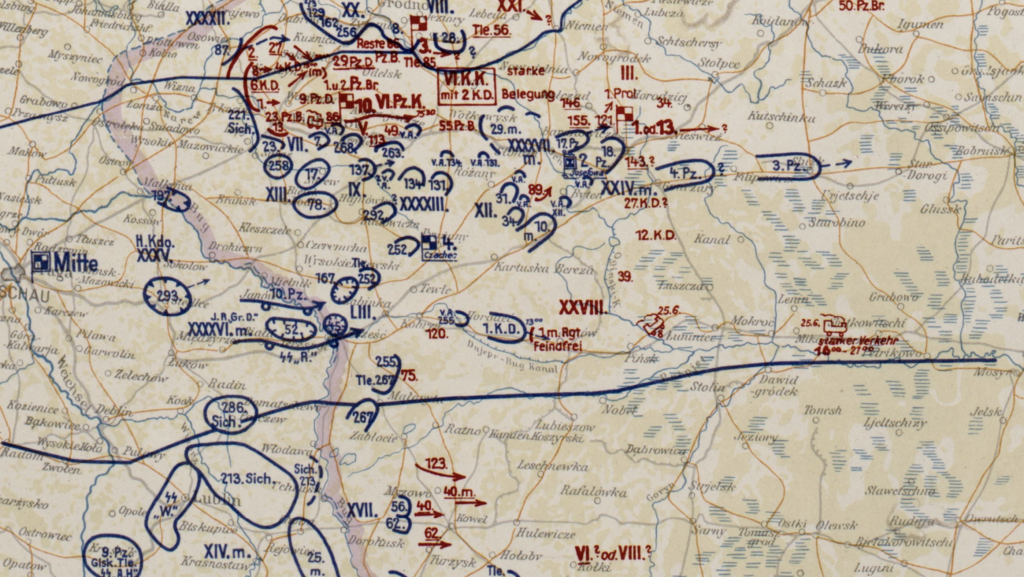 The atlas of June 26, 1941, shows the German troops (blue) overtaking Russian troops (red). Note the progress of the Third Panzer Division (3.Pz) as it drives east. Warschau, the occupied Polish capital, is at the middle left edge of the frame.

The formula was seemingly unstoppable: Shock troops, armored vehicles and ground attack planes hit hard and fast, bypassing heavy pockets of resistance, which they left to a second wave of forces to surround and destroy. The plan worked brilliantly in the early days. The Germans raced eastward at breakneck speed, as the maps attest. 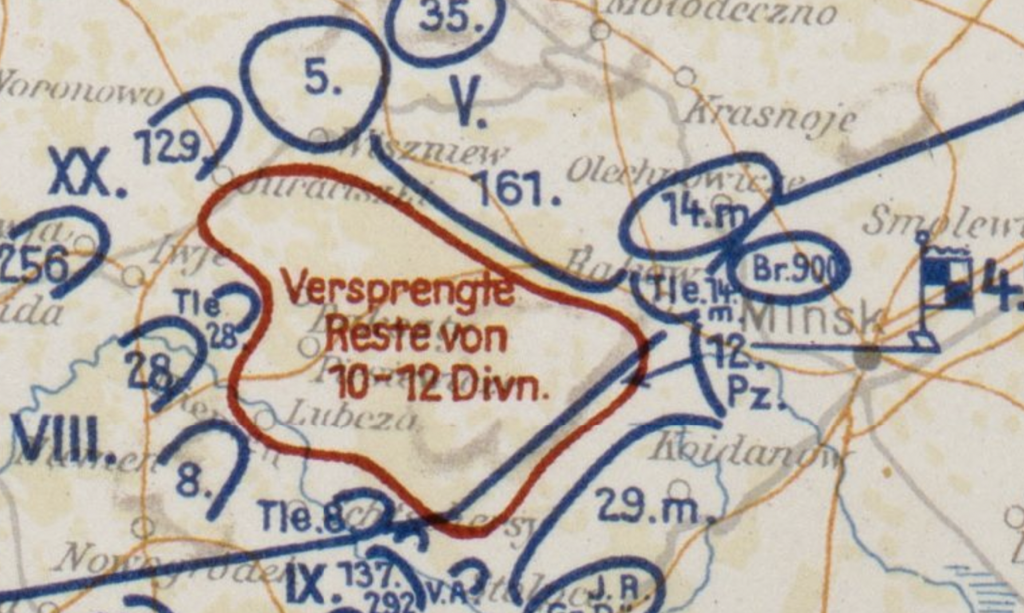 Soviet divisions surrounded by Nazi forces, as shown on July 5, 1941, in what is now Belarus.

Just a month into the invasion, Hitler’s forces had overrun a swath of Soviet territory twice the size of France. They were capturing Soviet troops by the hundreds of thousands. In the battles of Minsk and Smolensk, some 600,000 Red Army soldiers surrendered; in Kiev, more than 650,000 Soviet troops raised the white flag. German confidence in Hitler soared.

The Fuehrer was interested in every aspect of the invasion. A frontline veteran of World War I, he remembered Germany’s victory over Russia and was resolute that, with his modernized tank army, victory could be achieved once more. To direct the fighting, he relocated from Berlin to a headquarters called Wolf’s Lair located in Rastenburg, East Prussia (now Poland). He occupied Wolf’s Lair on June 23, 1941, and largely remained there until November 1944, only departing as the Soviet forces approached. It first appears on the atlas on June 25, 1941, represented by a flag with an Iron Cross. 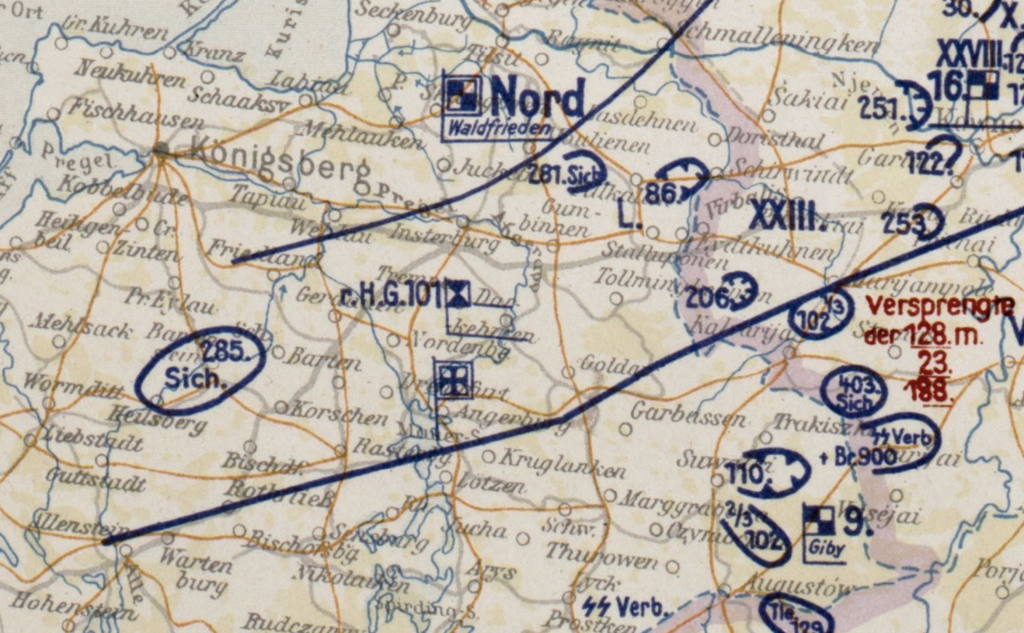 Wolf’s Lair’s first appearance in the atlas, marked by the Iron Cross in the center of the map.

Hitler’s assault on Russia was aimed at eliminating communism, as well as extending racial war against the Jews, Slavs and other “non-Aryans.” The atlas indirectly notes the killing fields in the Soviet Union, where Nazis and their sympathizers gunned down “enemies of the Reich” and left the bodies in hastily covered ditches. To catch these details, however, takes an informed historical eye. The giveaways are the presence of SS units and paramilitary forces — noted with the abbreviation “Sich,” a shortened form of the German word for security, “Sicherheit.”

Just two days into the assault, for example, the atlas shows a heavy concentration of SS troops around Lublin, Poland. Nazis executed large numbers of prisoners in nearby forests that summer. By October, they had established the Majdanek concentration camp, one of the largest of the Holocaust, just southeast of the city. It eventually had seven gas chambers and a crematorium with five ovens. Some 360,000 people were killed there during the course of the war.

Atlas of June 24, 1941, documenting SS activity around Lublin, Poland. The Majdanek concentration camp was built there within four months.

The atlas closes with the Nazi high watermark in the Soviet Union, with troops positioned within sight of Moscow. But winter fell. The Soviets regrouped and counterattacked. The Germans would never threaten Moscow again. Hitler tried alternate strategies — the siege of Leningrad, the battle at Stalingrad, the world’s largest tank battle at Kursk — but the Soviets held and then began to force the Nazis to retreat. 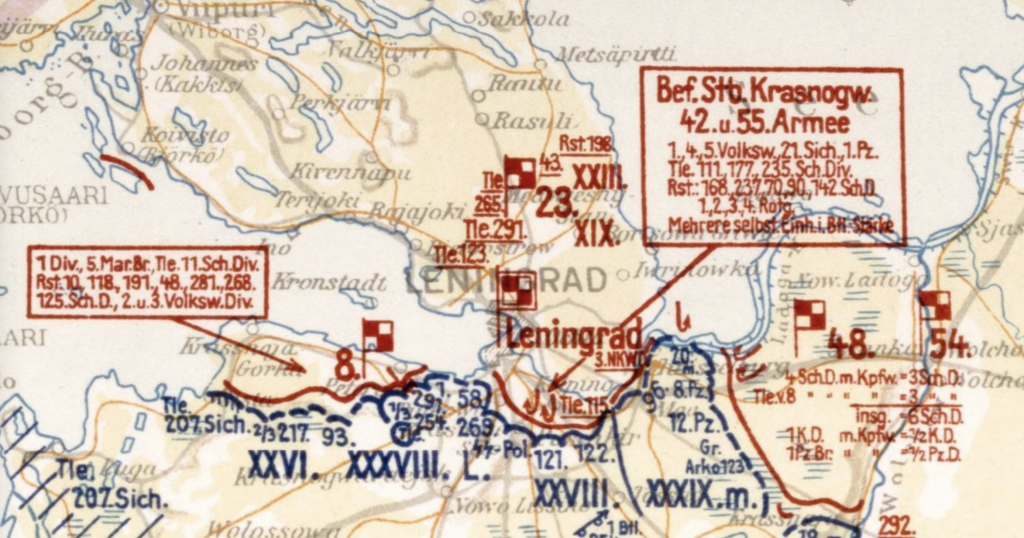 The city never fell, but the impact on the civilian population was devastating. Estimates of civilian deaths range from 800,000 to one million, as bombs, bullets, starvation and disease ravaged the population.

The tide of war changed with the Allies landing in France and advancing in Italy. By April of 1945, the Russian siege of Berlin had commenced. Desperate – if not fanatical — German resistance could not stop the Soviet onslaught. Hitler realized the end was at hand and committed suicide. The unconditional surrender of Germany to the Allies followed on May 8.

This unique atlas of Germany’s first victorious months lay somewhere in the ruins of Hitler’s Third Reich and eventually made its way to the Library of Congress.