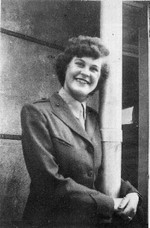 This is a guest post by Megan Harris, a senior reference specialist for the Library’s Veterans History Project, part of the American Folklife Center.

When the war ended, Gladyce “Pepper” Pederson Nypan cried, her tears dripping down into her dinner of mashed potatoes and gravy.

Benjamin Cooper wrote a love letter to his wife. Alfred Newman watched his comrades fire off live ammunition, so intense was their celebrating. Jerome Yellin was still high in the sky over Japan, completing his 19th mission as a fighter pilot with the 78th Fighter Squadron. It wasn’t until he landed that he heard the news of the enemy’s surrender.

All of these stories and more are part of VHP’s newest installment of our online exhibit, Experiencing War, which commemorates the 75th anniversary of the end of World War II. Drawing on 15 individual narratives from the Veterans History Project, the exhibit explores the wartime experiences of just a sample of the 16 million Americans who spent the war in uniform, and the lasting effects of service that endured far beyond the victories in Europe (V-E Day) and Japan (V-J Day) in May and September 1945. 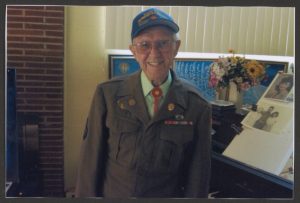 “War’s end” might conjure up images of jubilant crowds in Times Square, with nurses being kissed by sailors, and the other joyful celebrations around the globe which took place on V-E and V-J Day. But the personal stories included in the online exhibit complicate this perspective, revealing a deeper, more nuanced view of the end of the war and what it meant for those who served.

For example, those tears shed by Pepper Nypan? Those were tears of sorrow, not joy. She cried as she journeyed home after mustering out, realizing that her time in the Marine Corps had come to an end and she might never again see the women with whom she had served and developed incredibly close bonds. Benjamin Cooper’s romantic letter to his wife contained words of love, but also descriptions of what he had seen when his unit liberated Dachau, sights that would continue to haunt him for decades. George Sakato recovered from his wounds, but because of his ethnicity, his heroism in combat went unrecognized for over 50 years. He finally received the Medal of Honor in 2000. Though George Pearcy did not survive the war, his POW diary did, thanks to Robert Augur’s efforts (for the full story of Pearcy and Augur’s friendship and diaries, check out these three blog posts from 2016).

Seventy-five years after the end of World War II, we look back at these stories to understand how deeply and dramatically the war changed everything—from the landscape of American society to global politics, and, perhaps most importantly, the course of individual lives. For more stories of the end of the war, check out these previous web features, commemorating the 65th and 70th anniversaries.