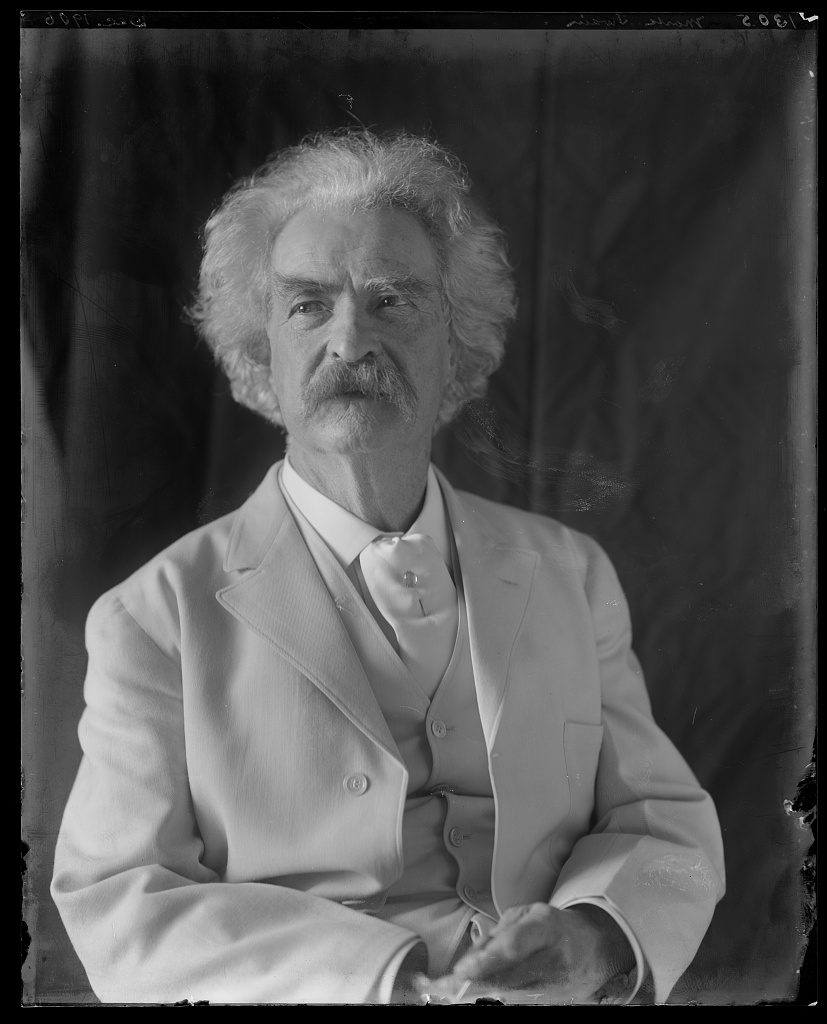 Mark Twain impersonators routinely don a white suit to evoke the persona of the famous author. But Twain himself did not make a habit of wearing white at all times of the year until very late in his life. He unveiled his signature style on December 7, 1906, at age 71, when he testified about a copyright reform bill before the Congressional Joint Committee on Patents. The hearing took place in the Congressional Reading Room of the Library of Congress.

“In spite of the keen December wind blowing outside, he burst into view, garbed in a cream-colored suit of light summer flannel,” wrote the Washington Post in “Twain’s Fancy Suit” on December 8, 1906. “The effect was decidedly startling; it fairly made one shiver to look at him.”

“Nothing could have been more dramatic than the gesture with which he flung off his long loose overcoat, and stood forth in white from his feet to the crown of his silvery head,” wrote William Dean Howells, Twain’s close friend, in “My Mark Twain.” “It was a magnificent coup, and he dearly loved a coup.”

“I have reached the age where dark clothes have a depressing effect on me,” the Post quotes Twain as explaining. “I prefer light clothing, colors, like those worn by the ladies at the opera.” 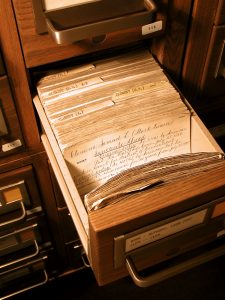 A copyright catalog card records that Twain renewed the copyright to “Innocents Abroad” in 1897. First published in 1869, the book recounts Twain’s travels in Europe and the Holy Land. Photograph by Charles Gibbons.

Whatever his reason for wearing white, it helped to call attention to his testimony. Twain was a strong promoter of copyright reform, both domestic and international. He had lost substantial income in past decades from overseas piracy of his work, especially in Canada and Britain. In the 1870s, he started traveling to Canada upon publishing a new work to apply for a Canadian copyright, which protected his works throughout the British Empire. He enthusiastically welcomed passage of the International Copyright Act of 1891, which extended copyright protection to works of foreign authors whose countries offered similar protection to works of U.S. nationals.

Twain, who was born Samuel Langhorne Clemens, wanted copyright protection to last in perpetuity. But he testified in 1906 in favor of the bill then before Congress extending protection to the life of an author plus 50 years. At the time, the term was 28 years with the privilege of renewal for another 14 years.

Twain expressed his view with characteristic wit: “I like that extension from the present limit of copyright life of 42 years to the author’s life and 50 years after,” he testified. “I think that will satisfy any reasonable author, because it will take care of his children. Let the grandchildren take care of themselves.”

The 1906 bill did not pass, and the term Twain argued for didn’t become law until 1978, when the 1976 Copyright Act was implemented. Today, the term for most works is the life of the author plus 70 years.

While in Washington in 1906, Twain visited the studio of Frances Benjamin Johnston on 1332 V Street, NW. One of the first American women to achieve prominence as a photographer, she had already taken pictures of many famous people, including Theodore Roosevelt, Susan B. Anthony and John Philip Sousa. On December 11, 1906, Twain sat for Johnston in his white suit, documenting for posterity his soon-to-be-iconic look.

The Library houses the Frances Benjamin Johnston Collection, consisting of thousands of photographic prints and glass and film negatives, and personal papers of Johnston’s, including correspondence, diaries and writings.

This post draws on “Dressing the Part: Mark Twain’s White Suit, Copyright Reform and the Camera,” by Annelise K. Madsen, published in 2009 in the Journal of American Culture.