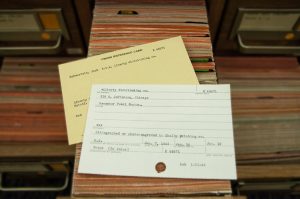 President John F. Kennedy was assassinated in Dallas 54 years ago today. Last month, to much anticipation, historians and the public awaited release by the National Archives of the government’s final records on the investigation into his murder—a law passed in 1992 set October 26, 2017, as the deadline for public disclosure of all assassination-related records.

The National Archives did indeed release thousands of records that day. But the president postponed making certain information public because of national security and other concerns raised by government agencies. The agencies now have until next spring to report on the reasons behind their request. So even though most of the records have been released—hundreds of thousands are available on the website of the National Archives—the saga continues.

The back-and-forth about the final records release reminded me of a column I wrote a few years ago. It recounts an odd tie to the government’s investigation into the assassination discovered in the records of the U.S. Copyright Office, which is part of the Library of Congress.

The President’s Commission on the Assassination of President Kennedy, known informally as the Warren Commission, investigated Kennedy’s assassination in 1963 and 1964, publishing an 889-page report. In the course of its investigation, the commission asked federal agencies to search their files for any information related to Lee Harvey Oswald, who assassinated President Kennedy, or Jack Ruby, who shot and killed Oswald.

A search of the Copyright Office’s records turned up nothing on Oswald but identified a registration filed by Jack Rubenstein on January 16, 1942, for a color print titled “Remember Pearl Harbor.” The catalog card for the registration notes that Rubenstein was “doing business as Liberty Distributing Co.,” located in Chicago.

A biography of Jack Ruby in the Warren Commission’s report notes that Ruby was born in Chicago in 1911 and named Jacob Rubenstein by his parents, immigrants from Poland. He changed his name to Jack Ruby in 1947.

As a young man, Ruby engaged in assorted commercial ventures to support himself. In 1941, he and a friend established a small firm to sell novelty items. After the attack on Pearl Harbor in December of that year, they decided to sell plaques commemorating the “Day of Infamy.” The art Ruby registered with the Copyright Office in 1942 was for the plaque.

An earlier experience may have alerted Ruby to the benefits of copyright registration. For the Warren Commission inquiry, Bell P. Herndon, special agent of the Federal Bureau of Investigation, interrogated Ruby on July 18, 1964, about Ruby’s life before the Kennedy assassination. “Have you ever served time in jail?” Herndon asked. Ruby admitted to serving 30 days for unauthorized sale of copyrighted sheet music “back in the old depression days” in Chicago.

“That 30 days embarrasses me,” Ruby testified. “It was something that I didn’t realize at the time there were copyrights on those songs.” He added that he “made a pretty good living at that time.”

Records indicate that the art Ruby deposited for his 1942 registration no longer exists in the Library’s holdings.