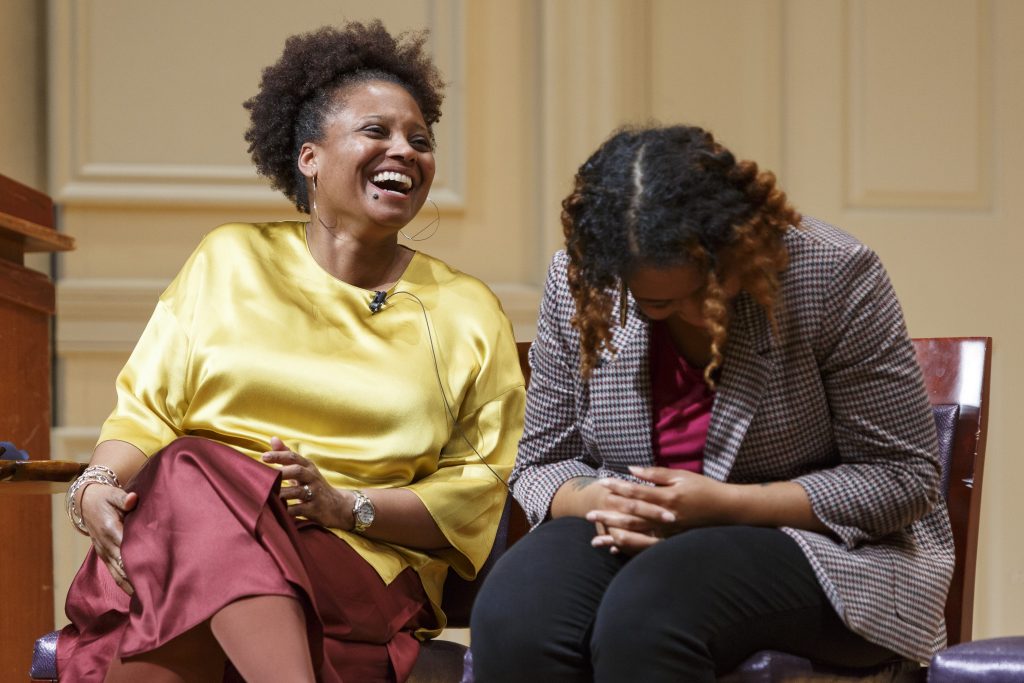 Tracy K. Smith concluded her remarkable term as U.S. Poet Laureate with a speech and on-stage conversation at the Library of Congress Monday night, capping two years of travel, podcasts and community conversations across the nation.

Smith began her tenure with a packed reading at the Coolidge Auditorium in Sept. 2017, and she ended it on the same stage in much the same fashion, sharing the platform with five poets laureate from Hawaii to New York.

Speaking to an enthusiastic audience, she said she felt “indescribably lucky.” She had taken the post with the belief that poetry had always been good for the individual. Two years later: “More than ever, I believe it’s good for the collective, the community, even to something resembling the nation.”

The poet’s office in the Library’s Poetry and Literature Center, high in the Jefferson Building, features elegant furniture and dramatic, west-facing views of the U.S. Capitol Building and the National Mall, the Washington Monument in the distance. Smith, however, did not use the space as a retreat for ivory-towered contemplation.

Instead, she used the position for active outreach, working to expand poetry’s impact on multiple fronts. She, with a team from the Library, made seven trips across the country in an “American Conversations” tour, traveling from Alaska to Louisiana, holding readings in rural areas that are not on the typical literary circuit. She typically read from a poem, then asked the crowd, “What did you notice?” and let the conversation go where it willed.

While at home in New Jersey, she recorded more than 100 episodes of “The Slowdown,” her five-minute daily poetry podcast. She also edited a volume of poetry, wrote an opera libretto, penned essays for the New York Times and others, all while maintaining her position as the director and professor of creative writing at Princeton University.

It all combined, she said, to make her rethink what poetry might mean for an often bruised country.

“I was…very determined to push back against the pervasive narrative of America as a divided nation,” she told the crowd at the Coolidge. “The narrative that says people in the rural heartland have nothing in common, not even a shared language, with those living in urban centers.”

Jennifer Benka, president and executive director of Academy of American Poets, a non-profit agency dedicated to supporting the art form, moderated the on-stage conversation. She said that Smith’s grassroots approach had expanded the horizons of dozens of national and regional poetry organizations. “Because of you and the work that you’ve done,” Benka said, “we’ve begun a conversation about how we are serving rural communities in our poetry programming and that’s not something we’ve talked about before.”

Smith arrived in Washington just a few hours before the event, stepping off a train at Union Station and rushing into a whirlwind last day. She settled into her office in the Jefferson Building for the final time, beaming.

“When I’m in this room I feel really grateful to be a part of the history that it represents,” she said. “I think about Gwendolyn Brooks and Elizabeth Bishop and Rita Dove and Natasha Trethewey (all former poets laureate). I think about these people who are so important for me as a reader and as a poet.”

The office, and its civic duties, had compelled her to think about poetry not so much as an introspective art, she said, but more often in its role in the public square. That triggered a change in her own poetry, she said.

Poetry, she came to realize, “is something that could make us better at listening to, and being compassionate toward one another as citizens. I think that just being called upon to talk about the art form in those terms has made me think in ways I wouldn’t normally have done. I’m used to thinking about craft-based questions, as a professor, in terms of my own work. But I’ve been thinking more socially and, you know, conceptually. I think my sense of even how I approach different voices is larger as a result.”

Smith was born in Massachusetts in 1972, raised in California, and educated at Harvard, Columbia and Stanford. Her third book of poetry, “Life on Mars,” won the 2012 Pulitzer Prize, and her memoir, “Ordinary Light,” was a 2015 finalist for the National Book Award.

She was the 22nd Poet Laureate of the U.S., and the first chosen by Librarian of Congress Carla Hayden. Her most spine-tingling moment at the Library? When, as background research for a video tribute for Walt Whitman’s 200th birthday celebration, she pored over his things in the Library’s holdings.

“There were his eyeglasses, his cane, a bust of his hands, and some notebooks of early versions of “Leaves of Grass,” she laughed, “and that was pretty transcendent.”